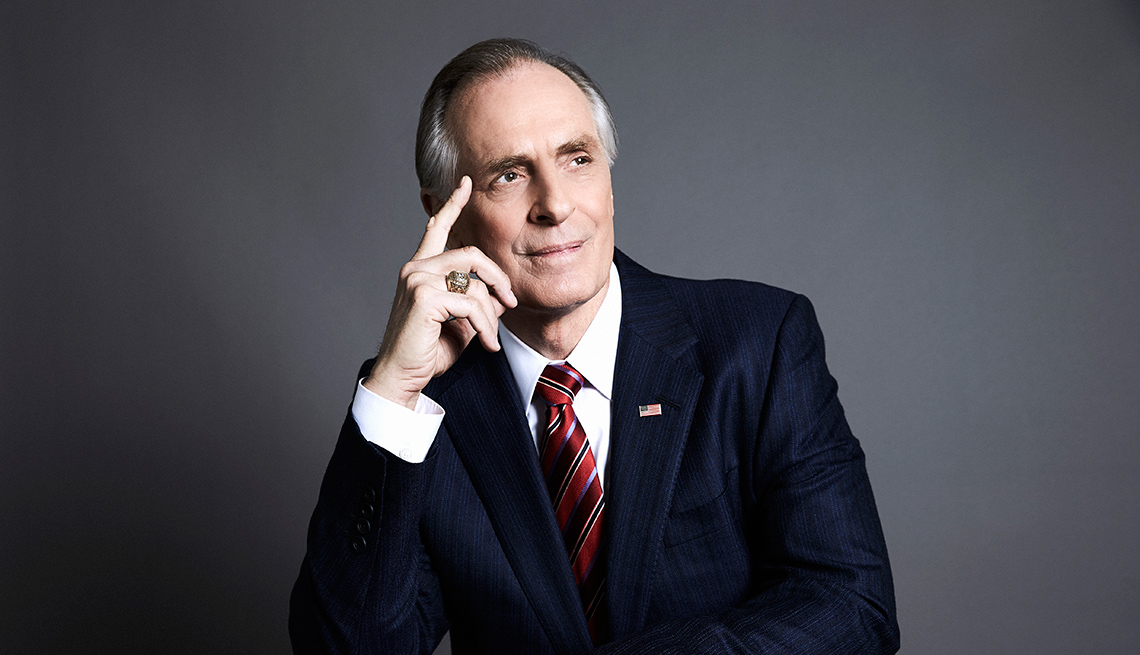 Keith Carradine, who plays the president in "Madam Secretary," says as he ages, people see more of his father in him.

Keith Carradine, 68, who broke out as the star of the LBJ-teasing 1967 hippie musical Hair, grew up to earn an Oscar, an Emmy nomination and the job of President Conrad Dalton on CBS’s hit Madam Secretary. He tells AARP what it’s like to run the world.

Is Madam Secretary set in an alternate universe, like The West Wing?

The conceit is that we’re maybe five years ahead of where we are right now as a country. However, a lot of issues we deal with are current, both socially and geopolitically.

So how does it feel to step into Martin Sheen’s shoes?

Ha ha ha! I’m a huge fan. Marty is a friend, but what’s required of me is different. We’re not about the West Wing, we’re looking at Washington from the point of view of the secretary of state [Téa Leoni]. But we like to present ourselves as aspirational. This is how things ought to be. We like to believe that everything is dealt with by rational, reasonable adults.

Our 38 million AARP readers include conservatives, liberals and independents. What is President Dalton?

We’ve never labeled him. I don’t think we’ve ever used the words Democrat or Republican.

But what’s his ideological niche?

I’d say he’s either a RINO [Republican in name only] or a Blue Dog Democrat ... somewhere in the middle. He has a sense of tolerance regarding social issues, probably a fiscal conservative, advocating for a strong military. Having been director of the CIA, all of that fits into who he is.

What is his demon? What drives him? He reminds me of the British leader in Yes, Minister, always trying to do stuff, but things get in the way.

Well, that’s the world, isn’t it? He wants to make the country a better place, encourage the citizenry to look to their better angels, as Lincoln said. Yeah, you’re cloaked with immense power, but you’re surrounded by all these checks and balances. There’s an overall thrust behind our show: We’re all in this together, we need to reach across the aisle to have a conversation and not just keep labeling each other. Because you get nowhere doing that. In every national disaster, nobody stops to ask, “Who did you vote for?” before they pull you into the lifeboat. That’s just not who we are. Dalton’s biggest frustration is that he’s often thwarted by raw partisanship and all the worst aspects of the culture of D.C.

Besides Sheen, another man of presidential timber who looms over you is your dad, John, who had four sons and several grandchildren who became important actors, including your daughter Martha Plimpton.

I learned early that there was no way I could compete with my father, a giant as a Shakespearean actor and character man in the movies. So I made my own way. Mostly what I learned from my dad was be prepared, and temperament is bad manners.

You and Peter Fonda both grew out of your dads’ vast shadows, won fame as '60s rebels and then perhaps started seeing aspects of your dads in yourself after you turned 50.

As I age, people see more of my father in me, or my late brother David [Kung Fu, Kill Bill].

Diane Keaton also started in Hair. She told me lots of people in the cast went crazy from the fame.

Listen, it was a very heady time, all puns intended. There was great social change occurring as we stood on that stage. The Vietnam War was this enormous offstage prop. We all thought we were changing the world. It was a great foundation for me because I had a chance to stand on a stage eight times a week for 11 months and get better at it. Practice makes perfect. 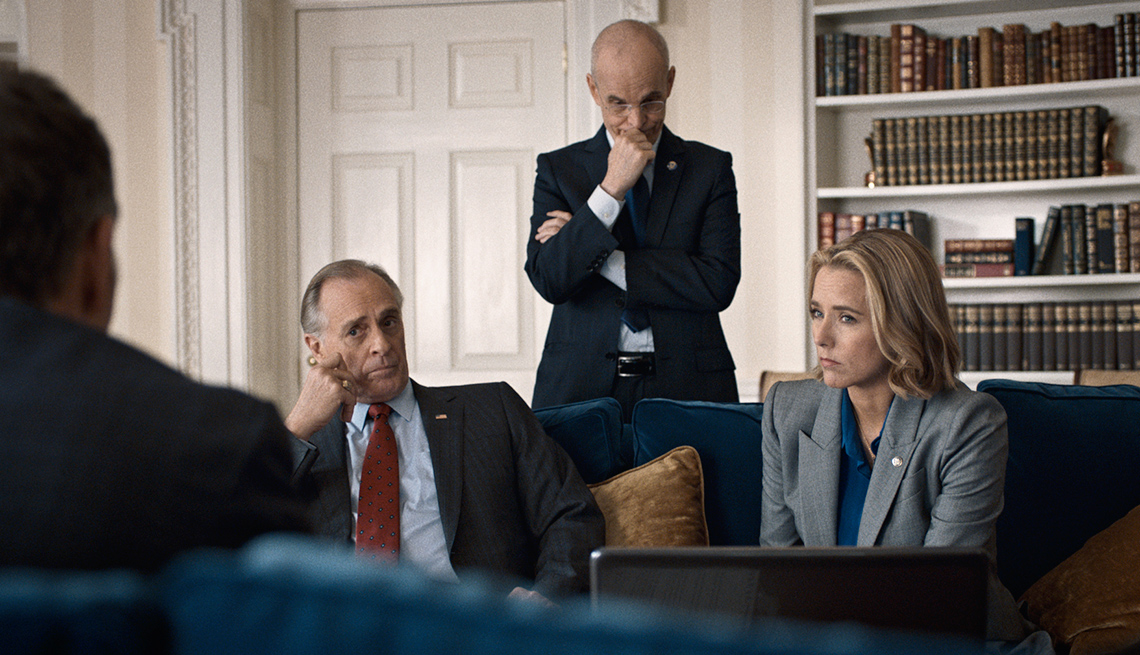 You have cowboy DNA, maybe because your first career goal was to be a forester.

I was born and raised in California, the son of a Shakespearean actor raised in New York. But for some reason I grew up with this Western patina on me. I’ve always felt more comfortable in nature.

So then Robert Altman hired you in your second young gunslinger role, McCabe & Mrs. Miller.

I became bona fide because Robert Altman chose me at 20: “This kid’s got something.”

And now you’re having a TV renaissance — not just Madam Secretary, but Fargo, the Coen brothers reboot by Noah Hawley, 50.

Noah is some kind of mad genius, able to capture the Coens' voice so thoroughly and yet have it be its own thing. They were so impressed, they said, “Well, OK, you can put our name on it.”

Your character plays the cop dad of the heroine, played by Allison Tolman who utterly deserved her Emmy nomination.

Once his daughter joins the force, there’s a wonderful sense of validation and trepidation. The show is a wonderful cross section of American culture in the upper Midwest, the Scandinavian influence. It’s about how the banal and commonplace blend with the extraordinary and disturbing.

Do you think Hollywood would do well to pay more attention to actors over 50?

Well, absolutely. Listen, we are a youth-oriented culture. The idea that it’s worth looking at a person who has matured and actually might have gained a little wisdom — that isn’t a place pop culture tends to go, and it’s a great loss. Our culture kind of needs to rethink how we look at our older population, revered in other countries.

But midlife is treating you just fine.

And it may be significant that Kenneth Branagh’s Murder on the Orient Express, packed with actors over 50, hit big, and the No. 1 film, Coco, is about an Alzheimer’s patient who triumphs through family and music. You’ve been honored by the Alzheimer’s Association for your work in that cause.

My father-in-law is an early-onset sufferer, hit in his early 60s. An incredibly accomplished guy, a Marine Corps fighter pilot who helped set up the tactical Air Force base in Da Nang in 1964. We have circled the wagons as a family, with my wife and mother-in-law as primary caregivers. It’s been an incredibly difficult, grievous and at the same time a rewarding and joyful journey. If his grasp of language has faded, you approach the conversation as if he could follow — we maintain contact, a sense of connection with him, and he with us. There are moments of bliss and joy, but it’s a tough one, man. So I’ve been very committed to doing whatever I can in terms of fundraising and outreach.

What have you learned by age 68?

These two words were given to me by a wise person, and I’ve hung onto them: Accept and allow. It speaks to a notion of tolerance and the necessity to see one another. Take off the blinders, get out of the echo chamber, listen. You’re gonna learn a hell of a lot more listening than you will by talking.