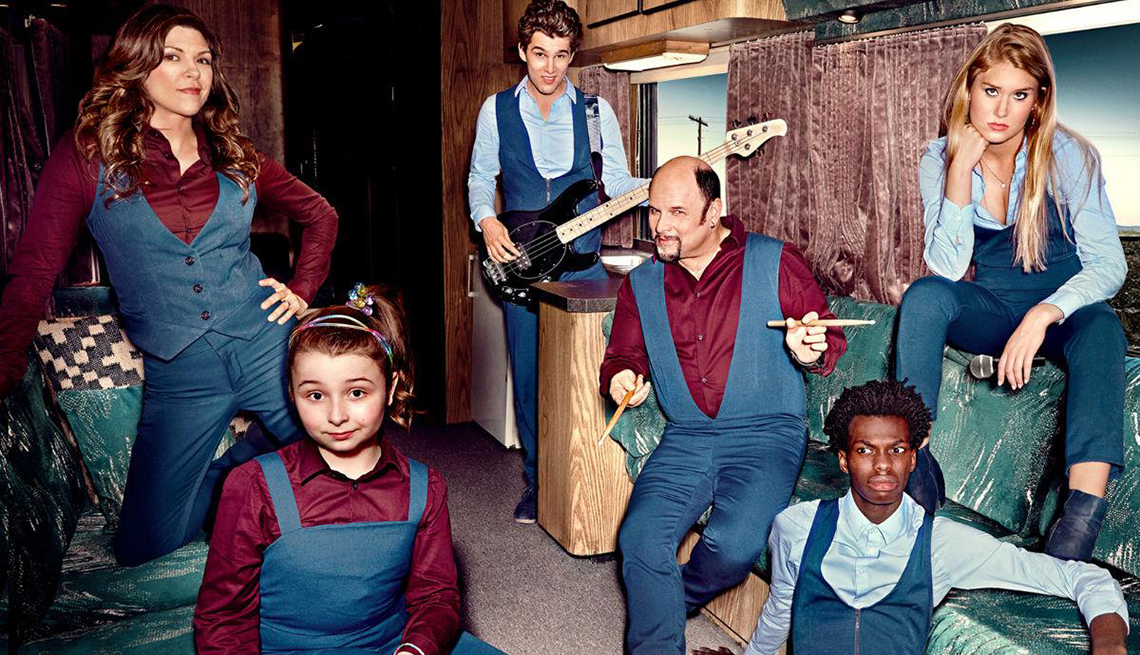 Where to Watch: DirecTV and AT&T Audience Network U-verse app

Two decades after Seinfeld, Jason Alexander, 58, is back as star, co-writer and producer of Hit the Road, AT&T Audience Network's raunchy series about a dysfunctional family band in a tour van, premiering Oct. 17. He tells AARP about his Tony Award-winning musical career, his edgy comedy, and how they came together at last.

People don't realize you're more than George Costanza — you're a musical guy who won a Tony Award in a Jerome Robbins show, dueted with Angela Lansbury in Streisand's tribute to Stephen Sondheim and directed big-time musicals.

I started out on Broadway, most of my TV movies are musicals. If you're watching me in Pretty Woman or Seinfeld, you might not know it.

Now you play Ken Swallow, bandleader of the Swallows. Is he like Costanza?

Ken's more optimistic than George. I play hapless people, so there is some similarity to George, but Hit the Road is edgier, with more adult themes. And we have rather touching and emotional moments Seinfeld would've abhorred.

How does your dad on the show compare with George Costanza's dad, Frank?

Richard Dreyfuss plays my dad, who's excessively and needlessly cruel for reasons that you'll find out. I tend to have father figures who don't think well of me. Frank Costanza has no darkness, and I cannot think of Frank Costanza as anything other than a teddy bear because I love Jerry Stiller to death.

Did the more wholesome Partridge Family inspire you to create the Swallow family?

My creative partner Peter Tilden's told hysterical stories about his friend whose family traveled in a circus. It's a family that can't get away from each other, they don't stay anywhere long enough to develop meaningful relationships outside the family. We started talking about the Partridge Family, with the most twisted ideas because David Cassidy and Susan Dey were gloriously attractive sex symbols, and I'm sure those actors were very attracted to each other.

What a tragedy for them both! We don't do a whole song every episode, like the Partridges or the Monkees. We use the music more to tell a story. Every episode has its own tone.

Like when Ken's daughter has sex with an aging rock star who dies on her in the family van.

We were a little nervous because there are some episodes that are almost cartoon-broad, where they're really nasty, but there are episodes where people's feelings are really exposed, and it kinda touches your heart.

What are the Swallows' musical influences?

The parents, me and Amy Pietz, were a touring act in the '80s, so my influences are the Billy Joels and Elton Johns, but the kids' influences are everything from modern pop to rap.

What is DirecTV and AT&T Audience Network, anyway?

It's kind of like Netflix when they began to do original programming. If you have DirecTV, you have the show. The only other way to see it is the DirecTV Now or AT&T U-verse app. They're making a real push into original programming, they really want to do stuff that's exciting and different. We're coupled with Peter Farrelly's new show Loudermilk. They had a hit with Stephen King's Mr. Mercedes this summer. I'm sorry the whole world can't see Hit the Road yet. I have 477,000 Twitter followers all over the world who ask, where can I see you? I go, you can't. Eventually, hopefully you can.

A cabdriver told Harry Shearer, "I was into Spinal Tap before the movie!" One day I'm sure you'll have the same experience with your imaginary band.

Exactly! "I was listening to the Swallows long before they were on TV."

Is there a bit of Little Miss Sunshine's DNA in Hit the Road?

Little Miss Sunshine was one of our beacons to model ourselves after.

No. That would be terrible.