Bob and Sol and Grace and Frankie 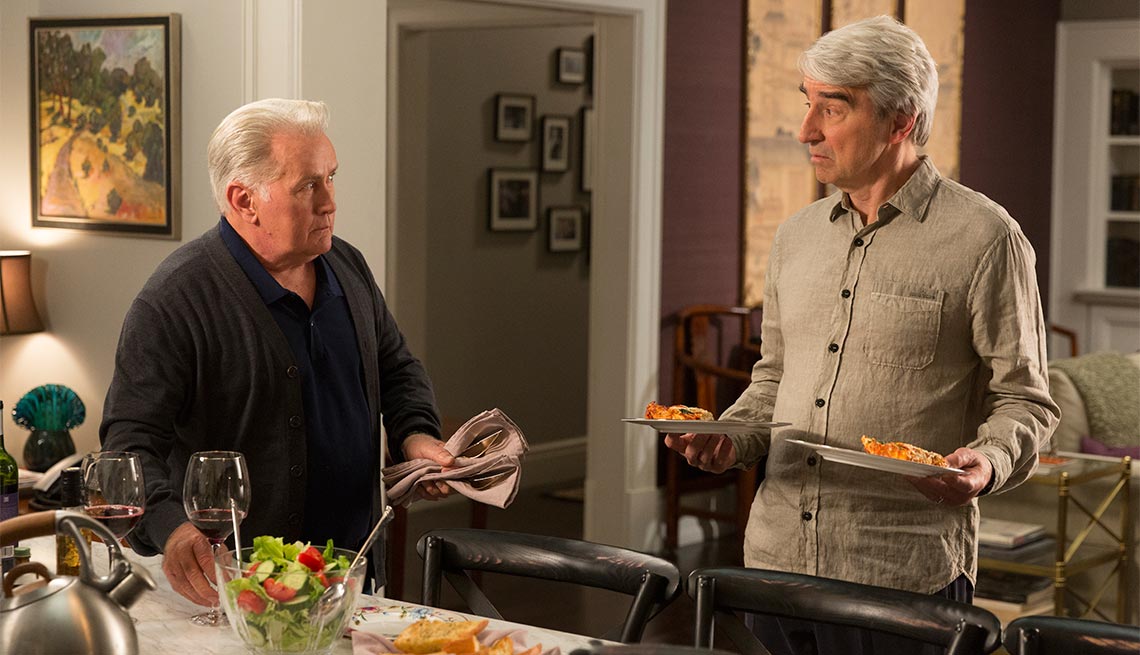 Martin Sheen and Sam Waterston portraying friends who became lovers in season two of "Grace and Frankie."
Melissa Moseley/Netflix
By

At 75, Waterston is the baby of the bunch. He plays divorce lawyer Sol Bergstein, whose 40-year marriage to stoner art teacher Frankie (Lily Tomlin, 76) collapses when Sol reveals he has fallen in love with a fellow lawyer, Robert (Martin Sheen, older than Waterston by all of three months). The fourth corner of this romantic rectangle is Grace, an ex-makeup mogul played by Jane Fonda, 78. A second season of Grace and Frankie arrived in May; a third was approved even before the second began airing.

Did someone say irony? Season 1 ends with Sol betraying Robert by returning to Frankie's bed. More than that, however, the beetle-browed, twinkly-eyed Waterston will not say. "Watch it!" he urges me by phone from his Connecticut home. "What happens next is really delicious."

The actor costarred on HBO's recent series The Newsroom as cable-news president Charlie Skinner, with Fonda playing his boss, the CEO of the network's parent company. But he is probably best known for his 16-year stint on the TV drama Law & Order as New York Assistant District Attorney (and later DA) Jack McCoy. "I sometimes wondered if I should go on and do something else," says Waterston of the enduring role. "But it seemed too comfortable a place to leave. It also turned out to be a great thing to have done — both on its own merits and for all the possibilities it opened up."

Waterston already had an Oscar nominiation under his belt for his role as journalist Sydney Schanberg in The Killing Fields (1984). In 1993 he won a Golden Globe for his portrayal of Southern lawyer Forrest Bedford on the TV melodrama I'll Fly Away.

With a role model this successful, should anyone be surprised that all four of Waterston's children have gone into the biz? James is an actor and Graham is a fledgling filmmaker, while Elisabeth and Katherine are both actresses. (Katherine costars in J.K. Rowling's November release, Fantastic Beasts and Where to Find Them.) "Lynn [his second wife of 40 years] and I did everything we could to encourage our kids to look around," says Waterston. "We wanted them to get a broad education and entertain the idea of doing all kinds of things — which they did.

"But it's true that your children learn from what you do, not from what you say. Despite the sweating of bullets that comes with it, they saw that show business was a great adventure."