En español | The dogs of America—the pampered and the pruned, the defiant and the dispossessed—led Cesar Millan, Mexican farm-boy dreamer, into stardom. Of course, that’s not the way Millan himself, star of the National Geographic Channel’s Dog Whisperer series, would put it. He’d never allow a pooch to lead him anywhere. He’s the calm, assertive pack leader. Always.

Two decades after Millan, then 21, crossed the border into California, looking to make a mark with his life, he’s doing it. (He became a U.S. citizen in 2009.) Now about to enter his seventh season of Whisperer, he’s a pop cult hero to dogs and their obedient owners, delivering fulfilled, well-behaved pups. And he presides over a canine-centered kingdom of books—his fifth is out in October—DVDs, toys, food, supplements and clothes touting his slogan, “Be The Pack Leader.” 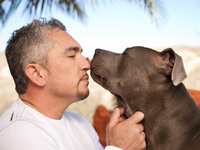 But Millan is far more than a trainer and purveyor of products. “I’m just an instinctive guy who lives in the moment,” he says. But his renown as a dog whisperer began long ago, in Culiacán, the Mexican city where he was raised by his grandfather on a ranch. He was the boy they called El Perrero (the dog man), hiking the hills with a pack of dogs, his closest friends. He had a dream he believed could be fulfilled only in Hollywood: to be “the best dog trainer in the world,” like those who turned Lassie and Rin Tin Tin into stars.

His success is rooted in his philosophy that balance between dogs and people is possible when dogs are raised with “rules, bounda­ries and limitations.” Dogs need exercise, discipline and affection—in that order. Humans, says, Millan, 41, lose common sense when dealing with dogs. “As a result, dogs in America aren’t fulfilled. That’s why they develop psy­chological problems, can’t move away from fear and have aggression problems.”

Shelter director Linda Blakely says Millan inspired the shift at Iowa-based Raccoon Valley Animal Sanctuary & Rescue from a kill to a no-kill facility, and that his methods led to a drop in returned adoptees, from 30 to 40 percent to less than 1 percent. “We decided there was a better way to save lives,” she says. The shelter’s expansion will include a center modeled after Millan’s Dog Psychology Center, for dogs exhibiting anxiety, fear and aggression.

Despite success stories, not everyone agrees with his approach. “Cesar looks at dogs from the pack-animal mentality that says there always has to be an alpha,” says Michelle Rivera, a dog evaluator who’s licensed by the Delta Society, which certifies service and therapy animals for work. “I don’t look at it that way. Dogs are pack animals. They have more of a motive to get along with everyone else.”

<p>“I know people think it’s not the macho thing to do to spay or neuter your dog. But it’s the humane thing to do.”</p>

Critics or not, Millan is building a center near Los Angeles that he hopes will be a national model: “Just as there are parks for sports and libraries for learning, there should be places where people come and experience dogs in their natural state.”

If Millan sounds evangelical about his work, it’s because he is. He and his wife, Ilusion, founded the Millan Foundation in 2007 to help rescue, rehabilitate and re-home abused and abandoned dogs. Although the couple’s 16-year marriage is ending—she filed for divorce in June—the foundation continues offering financial and educational support to nonprofits, especially no-kill facilities. He takes his message everywhere. In Miami, where several pit bull breeds are banned, Millan spoke against breed-specific legislation. Millan’s sons—Andre, 15, and Calvin, 9—have been raised around the breed.

And it’s not all about dogs; it’s about being human, too. His grandfather’s lessons live on. “What he represented to me was wisdom,” Millan says. “Get close to younger generations. We’re all related in a human manner.”

Tips for Choosing a Canine Companion

Americans 50+ and dogs can benefit from each other. To make it work, Millan suggests—

* Look for a medium- or low-energy dog.

* Study the dog’s temperament before taking him or her home.

* Be sure to make time for daily walks, or find someone who can walk the dog for you.

* If you can’t keep a dog where you live, volunteer at a shelter.