Editor’s Note: This is the third of a series of interviews with veteran television stars who are featured in the PBS series Pioneers of Television. The series runs through Feb. 8. Next up: Willard Scott, on life before Today.

En español  |  As Sgt. Pepper Anderson on the 1970s drama Police Woman, Angie Dickinson was the first female to head the cast of a successful TV drama.

Speak Out!
Did you used to watch Police Woman? Join the TV Talk community and chat with fellow readers about Angie Dickinson and the shows that made her famous. Do

"In '74, it was still unique to see a woman in uniform," Dickinson says in the same smart and sexy voice that Police Woman viewers heard when Pepper popped another perp.

Indeed, Dickinson broke ground for women as an actress as well as in portraying that women could be effective cops. That was quite an accomplishment at a time before Law & Order and CSI, and one the actress reflects upon in the third installment of the PBS series Pioneers of Television, this one devoted to our love affair with crime shows.

Her distinction, however, didn’t make her a feminist. "I never felt the need for feminism,” she says. “I never felt competition with men, which I really believed started the movement." It is possible Gloria Steinem would disagree. But, Dickinson has made a very nice living by knowing how to sell her femininity — without selling out.

"When I was up for a role, I didn't compete with men; it was a role for a woman." And, as for the historic inequity between what Hollywood paid men vs. women? "I was content with what they gave me," she says.

This crime show episode, like all four Pioneers hours, is industry-smart without being smart-alecky. For example, it points out that Lucille Ball was the producer of Mission Impossible. Who knew?

"I always felt like our show was too clean. Oh, you killed somebody! And it all worked out very nicely. The plumbing is still working. Everything … all wrapped up, nice and sweet."

Remember, this is the actress gruesomely murdered in Brian De Palma's 1980 movie Dressed to Kill. Clearly, she has thought about violence and still votes for gore.

"Show the consequences if you're going to cut somebody's head off," she says. Or else, "for someone who already has a problem, it does look easy. Bang, bang. So you killed somebody."

She thinks some of today's cop shows come closer to the grit of real police work. She mentions ABC's Detroit 1-8-7 and TNT's Southland, just starting its third season in January. 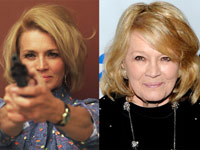 Like all the actors crammed into the PBS hour, her segments are brief. She doesn't get to go into much detail about either her pioneering role or TV violence. But what viewers will surely have time to notice is that Angie still has allure.

"I don't look fantastic," she protests when told she does. "I look my age. I'm 79." An avid walker and bicyclist — who, confesses she does not wear her helmet — she is enjoying a retirement of leisure and reward. "I don't feel my age. I feel about 20 years younger.

“But I don't feel sexy. Feeling it is not looking it." Perhaps, what she encounters on Rodeo Drive shapes her opinion? "Some women think they look sexy. But I don't think they're sexy. It's not a flattering picture."

When Dickinson adds, "Betty White jokes are just not for me" she's showing she's hip, not mean-spirited. And she is certainly not jealous of that octogenarian's suddenly packed schedule. "I am not looking for work, I don't really care. I've had my day in the sun, and I am very content."

Jack Curry, a former editor at USA Today and TV Guide, is a freelance writer and editor and serves on the editorial board of the U.S. Chamber of Commerce, specializing in corporate philanthropy and the media.