Editor’s Note: This is the second of a series of interviews with veteran television stars who are featured in the PBS series Pioneers of Television. The series runs through Feb. 8. Next up: Angie Dickinson, star of Police Woman.

En español  |  Linda Evans may be better remembered for her glamorous part on the 1980s hit Dynasty, but in the 1960s series, The Big Valley, Evans and the legendary Barbara Stanwyck changed the way women were portrayed in television Westerns.

Speak Out!
Did you used to watch Dynasty? Join the TV Talk community and chat with fellow readers about Linda Evans and the shows that made her famous. Do

Evans, 23 when the show began in 1965, and Stanwyck, then 58, played a frontier mother and daughter, Victoria and Audra Barkley, as independent, powerful women in a genre that was then exclusively dominated by men in such popular shows such as Bonanza, Gunsmoke and The Wild Wild West.

Evans talks about her groundbreaking role and the special relationship she developed with Stanwyck, who died in 1990, on the PBS series Pioneers of Television airing Tuesday (8/9 p.m. ET/PT).

“She loved to do stunts,” Evans recalls fondly of the actress she affectionately called Missy. “We had stuntwomen, of course, but we had to get involved so the cameras could show our faces and see that we were really in jeopardy.” Evans doesn’t think that The Big Valley ever set out to depict the American West authentically. “I don’t know that the show was real,” she says. “Our show was more about family, and [the Barkleys] were just set in the West.”

In fact, told that her character looked pretty fabulous for a frontier woman, Evans laughs. “I am sure there were all kinds of women running around the West. The Barkleys were rich after all, like [Dynasty’s] Krystle Carrington. I have been fortunate to play rich people. It’s so much more fun; the clothes are so much better,” she says, smiling. 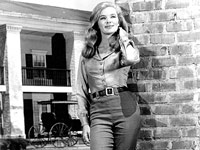 What Evans does not say on the PBS program is how close she came to never being part of the groundbreaking Valley. Nor the ironic reason this “pioneer” might not have joined the cast: Evans’ then boyfriend John Derek, who later became her husband, did not want her to take the job.

“He wanted me to get out of the show,” Evans says of Derek, whom she later married and divorced. She tried to quit, but the producers would not agree. “As a result, I never even watched the show when it was on.” Evans, who now lives in Washington state, admits that at the time “my dream was to be married, having children, not to be an actress. I would have been happy not to have done it.”

“I just love that [Dynasty] brought up so many taboos and played them out with understanding, so that people could have a greater perspective on these things. I just love that Steve was gay. And all the storylines with Claudia having depression and mental issues.”

Since Dynasty ended, she does not say she is in retirement. But her profile is much lower, for sure. “Not a bad thing. You get your life back.”

And it is a rich one, full of commitment to well-being. “I am 69 years old. I want to be healthy when I am 80, when I am 90. I think that exercise is really great security that later in life we are going to be able to use this body.”

She has her own gym and walks five miles a day in good weather. She also is working on a memoir/cookbook that's due out this October. “I mix together the people of my life, and recipes and food that I served them.”

Sounds like those ingredients will be well-seasoned. “What is sad is that everyone thinks being young is the ultimate. But, actually, once we are our age, you can jump off and go anywhere.”

Jack Curry, a former editor at USA Today, is a freelance writer and editor and serves on the editorial board of the U.S. Chamber of Commerce, specializing in corporate philanthropy and the media.