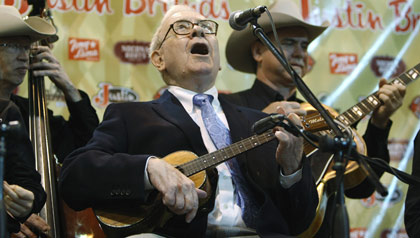 Berkshire Hathaway Chairman Warren Buffett sings and plays his ukulele with the Quebe Sisters Band at his company's annual meeting.

The ukulele — that humble four-stringed icon of all things cute and tuneful — is enjoying its biggest cultural upswing since Tiny Tim tiptoed through the tulips with one in 1968.

A bargain at less than $50 for an adequate model, the ukulele is acquiring new respect as a legitimate musical instrument and as an easy, relaxing way for people to discover the simple pleasure of making music at home without investing heavily in either instrument or lessons.

"The ukulele has always appealed to the older generation," says Jake Shimabukuro, 34, whose solo rendition of the Beatles' "While My Guitar Gently Weeps" is rapidly approaching 8 million views on YouTube. "Now you see many young kids doing pop and rock tunes on it."

Recent ukulele converts include Pearl Jam frontman Eddie Vedder, who will feature the instrument during a summer tour in support of his upcoming solo debut, Ukulele Songs. The female half of popular goth-cabaret duo Dresden Dolls released Amanda Palmer Performs the Popular Hits of Radiohead on Her Magical Ukulele last year. The band Train's "Hey, Soul Singer," which treated the ukulele as just another rock instrument, reached the number three spot on Billboard magazine's pop chart in 2010. And Doris Day devotee, singer-songwriter (and occasional rapper) Nellie McKay, 28, accompanies herself on the uke as a break from her usual seat at the piano.

"Bill Gates recently picked up the ukulele," Shimabukuro notes. "And Warren Buffett is a huge ukulele fan. I even got to strum a few chords with Francis Ford Coppola. It blows my mind that these people, who have everything in the world they could want, have picked up the ukulele and found a little bit of joy."

Like countless other Hawaiian children, Shimabukuro was enrolled by his parents at Roy Sakuma's Ukulele Studios at age 6. He went on to record a series of increasingly successful albums, the most recent of which is titled Peace Love Ukulele. One of the high points of his solo gig earlier this year at Brooklyn Bowl was his ambitiously faithful cover version of Queen's "Bohemian Rhapsody."

Shimabukuro attributes the light, portable uke's appeal to its tuning. Unlike the guitar, the uke's lowest string — tuned to middle C on a piano keyboard — lies in-between its two highest strings. This makes it simpler to play than a guitar because you don't need to worry about resolving bass notes from chord to chord. It also lends the instrument its friendly, chiming sound.

"When you're strumming the ukulele it sounds like children," Shimabukuro says. "It's in the same register as a child's voice, and that's what makes people smile when they hear it."

He believes the instrument's close association with Hawaiian splendors is another mark in its favor.

When it moved from Hawaii, the ukulele became a frequently featured player in Tin Pan Alley, vaudeville and Jazz Age productions thanks to performers such as Roy Smeck and Cliff "Ukulele Ike" Edwards. But the uke has transcended its novelty appeal. Producers David Barratt and Roger Greenwalt's The Beatles Complete on Ukulele Project, for example, releases a new recording of a Beatles song by a different artist online every Tuesday, with 115 of the group's 185 songs covered to date.

The biggest misconception about the ukulele, according to Barratt, is that it's only a toy.

"Its great misunderstanding is that it's thought of as a joke instrument," he says. "There is something humorous about ukuleles, because they're so bright and shiny sounding. But the idea of the uke being only a toy instrument is disappearing. Now even the cheaper ones stay vaguely in tune."

Ukulele World proprietor Roy T. Cone, meanwhile, is keeping the ukulele dream alive down in Seabrook, Texas, halfway between Galveston and Houston. Cone got into the ukulele business in the late 1950s after learning to build his own instruments as part of a seniors ukulele club. Today he recommends ukulele therapy for stroke victims looking for something to help with hand movement.

"It's a happy instrument that makes you smile and feel good," attests Cone, who says he sold "hundreds" of instruments over the past year. "Hell, I'm 84, so anything that makes me feel good at my age is bound to not be too bad."