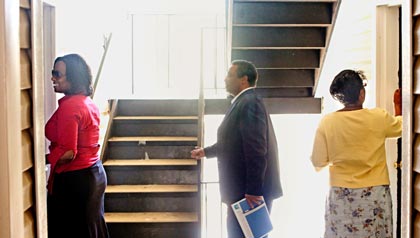 Then his wife, MaLinda Sapp, was diagnosed with colon cancer. She battled the disease for 18 months until her death in September, at age 43.

MaLinda Sapp often spoke out about the importance of living a healthy life and seeing a doctor regularly. Her passing has not diminished the importance of that message for her husband, who still believes regular checkups can save lives. That's why Marvin Sapp is performing a concert on April 30 that's free for everyone who gets a health screening at a health fair that day. Both events will be held at DeKalb United Pentecostal Church in Stone Mountain.

His appearance is part of AARP Georgia's stepped-up health outreach in the African American community, where at-risk residents often are reluctant to get regular checkups or see a doctor.

"Having just buried my wife, I know it's more important than ever that we live healthy, clean lives," Sapp said from his home in Grand Rapids, Mich., where he lives with his three children and is founder and senior pastor of the Lighthouse Full Life Center Church. "If you don't get proper screenings, things can happen that you can't imagine, and that you may not find out about until it's too late.

"It's exciting that I get an opportunity not only to share that message," Sapp added, "but to share music that will cause people to come out as well." Inspiring folks to do the right thing is the event's main goal.

The Rev. Myron Wideman, pastor at DeKalb United Pentecostal, has seen the forces that keep many people in his congregation, and in the surrounding neighborhood, from taking better care of themselves. Those factors include a lack of health insurance and fear of what a doctor might discover.

As a result, Wideman said, too many people in the area have been hospitalized, or died, because of maladies that affect African Americans at higher rates than most other ethnic groups: high blood pressure, diabetes and cancer. "People here are walking time bombs."

The pastor has spoken frequently to his congregation about medical issues, and his church has held several health fairs. But attracting people who need that information most has proved difficult. That's what prompted AARP Georgia to "do something that doesn't fit the mold of what's being done," said Tobias Tillmon, associate state director for multicultural outreach.

Next: Extra incentive to come out and be screened. >> 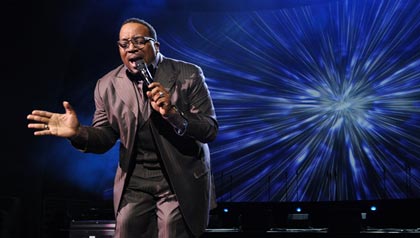 "Lots of organizations have health fairs," Tillmon said. "We wanted to do something different. Something that would give people an extra incentive to come out and be screened."

The solution: Pair health with entertainment, and put it in a church.

"African American churches have been a long-standing cornerstone in our community," Tillmon said. "There's no better place to go when we want to positively affect social change."

"Entertainment and information work well together," said Sapp, who performed on another tour last year, organized by the American Heart Association, to raise awareness of heart health among African Americans. "I've seen how people are affected. They find out things about their health they didn't know. So I jumped at this opportunity."

The screenings at DeKalb United Pentecostal will be from 10 a.m. to 4 p.m. Sapp and other gospel singers will perform from 5 to 7 p.m.

You must register for the health fair or the concert at 1-877-926-8300 toll-free; space is limited. Health fair participants are eligible for special concert seating.

"People are going to hear our message before they hear the song," Wideman said. "Too many people die because of foolishness, because they're afraid. If we can save one person's life — just one — the whole thing will have been worth it."

Drew Jubera is a freelance writer living in Atlanta.