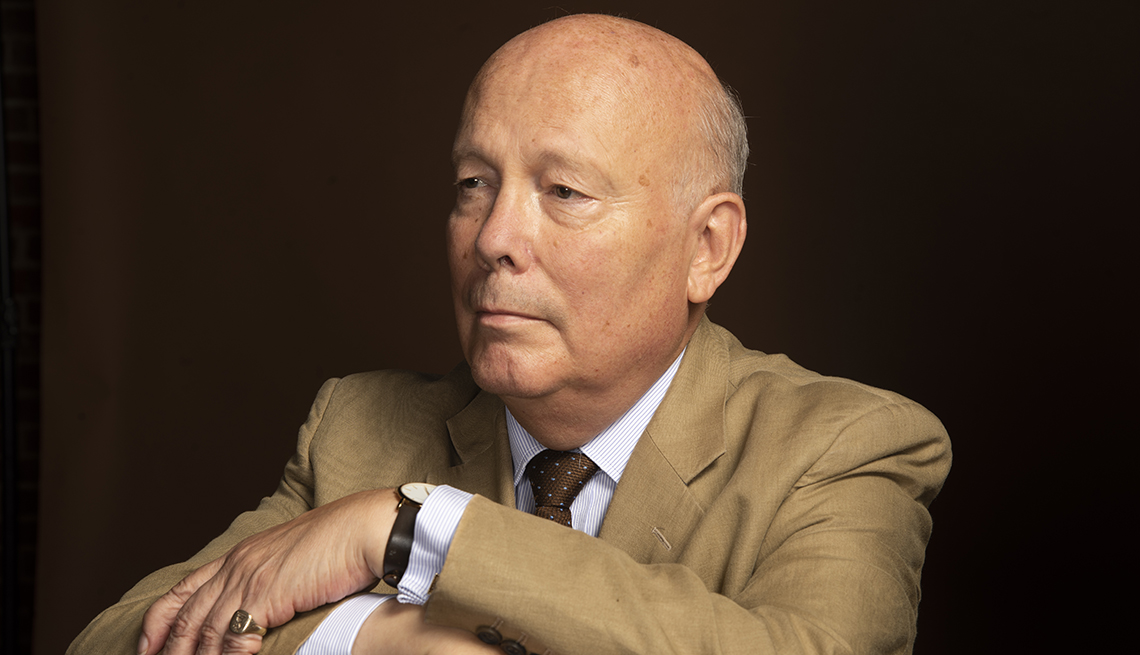 These homebound days, don't you yearn for a show that scratches that itch for another Downton Abbey? Downton creator Julian Fellowes, 70, has two new ones for you: Belgravia (Epix, April 12), about the secret lives of England's 19th-century upper crust, and The English Game (Netflix), about the birth of football (soccer to you), which began as a battle between aristocrats and upstart working-class heroes. Belgravia stars Downton's Harriet Walter, 69, as the somewhat Maggie Smith-like Countess of Brockenhurst, facing bewildering social change with a stiff upper lip and a will of iron.

"Downton was about the decline of the upper classes beginning in 1912,” explains Fellowes, who won an Oscar at 51 for writing Robert Altman's last, veddy 1930s-British masterpiece, Gosford Park. “Belgravia is set in the 1840s, the very early years of Queen Victoria's reign. Enormous fortunes were being made and everything was expanding." 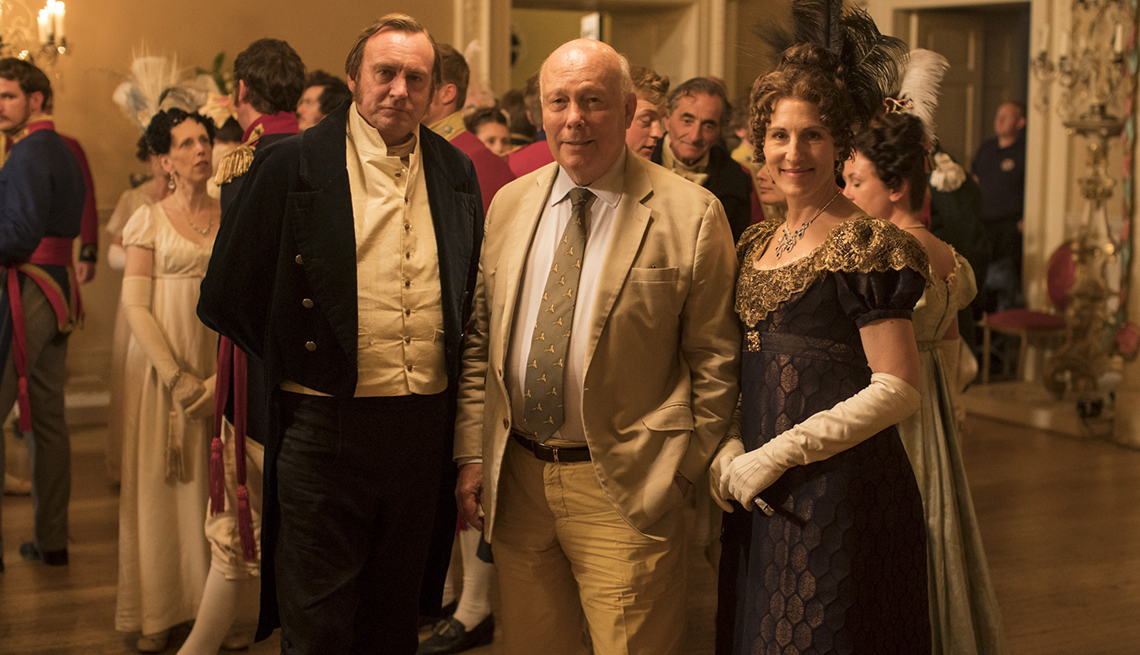 Some of Fellowes’ most improbable dramatic inventions really happened, like the diplomat who scandalously dies in the Downton heroine's bed, and Belgravia's low-born social climber James Trenchard (Philip Glenister), who gets rich and famous building London's hoity-toitiest neighborhoods. “Trenchard works for Thomas Cubitt [the genius who built Belgravia and Bloomsbury], whose descendant is now Camilla, Duchess of Cornwall, that will be the next queen. Trenchard is based on Cubitt, who was one of these New Men popping up as the economy is no longer controlled by the great landowners.” Belgravia's upstairs-downstairs strife powers the personal dramas, as in Downton.

In an unlikely yet true flashback scene, the British elite stage the ball of the century on the eve of the Battle of Waterloo, where Napoleon lost while killing the cream of British society. The soldiers left in the middle of the party as wives and fiancees wept, and some actually died in their fancy-dress uniforms. “It is a terrible story, and this strange mixture of glamour and tragedy is very potent, I think,” says Fellowes.

The standout in Belgravia's stellar cast is Harriet Walter, whose highbrow hits would make a fine binge-watch film and TV festival for any Anglophile. She played Lady Shackleton in Downton, the horrid Fanny Dashwood in Sense and Sensibility, Princess Margaret in Patrick Melrose, Sister Ursula in Call the Midwife, Clemmie Churchill in The Crown, plus exquisitely executed roles in Atonement, The Young Victoria, Midsomer Murders, Little Dorrit, Succession and Killing Eve.

Brockenhurst is astounded when younger, low-born but socially ambitious Anne Trenchard (Tamsin Greig) reveals that her family and Brockenhurst's are both involved in a hushed-up scandal involving unwed romance and untimely death. Shades of Downton's steamy sex secrets! “Lady Brockenhurst is surprised to come up against someone she cannot dominate, because Anne Trenchard refuses to be in her social power. It's a kind of awakening experience.” A bit like Downton's Dowager (Maggie Smith) with her rival, Isobel Crawley (Penelope Wilton). “The two generations have a mutual duty — the one to urge change and the other to restrain it. That is how you get satisfactory change. We're going through a recent period where we flood ourselves into any change, and it created a period of social chaos.” To which Fellowes’ nostalgic entertainments are the soothing, thrilling antidote.

Fellowes’ football (or soccer) show The English Game is also an upstairs-downstairs class-clash drama that brings a historical epoch to vivid life. “It's a pretty true story — we invented very little,” says Fellowes. “When they formalized football in 1879 and made a proper game of it, the [upper-crust] public-school boys devised all these rules that would leave the control of the game in their hands. They believed the only way of keeping it as a gentleman's game and keeping it civilized was to control it. They did behave very badly. And that's why one is rooting for the northern [working-class] teams, the underdog, to bring that stranglehold on the game to an end." 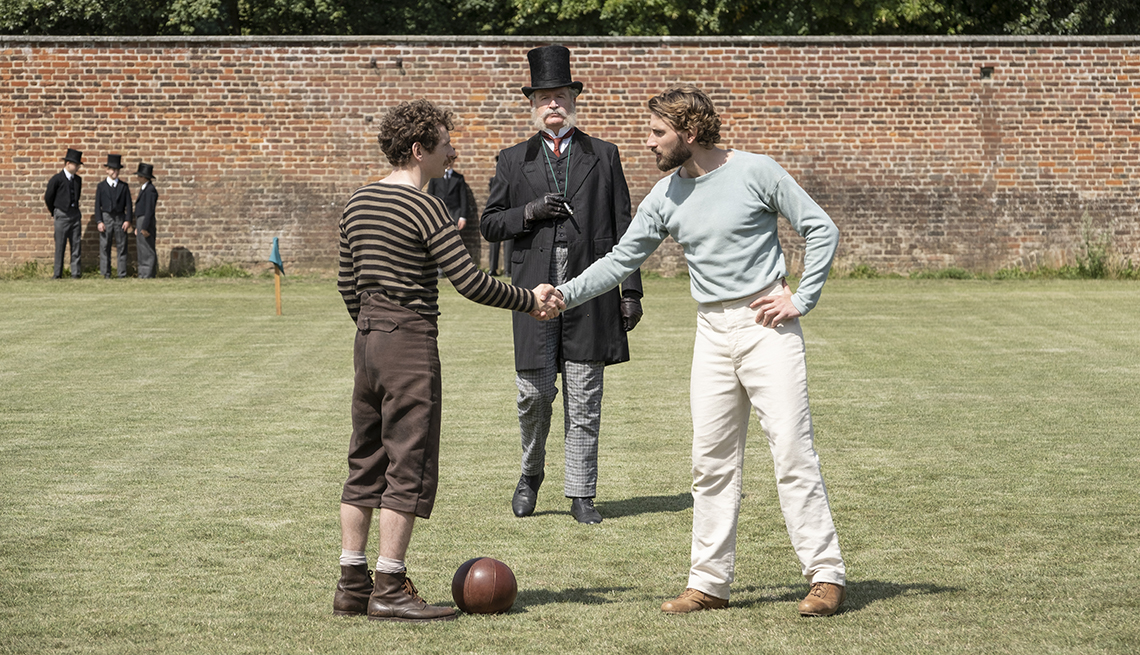 Gerard Kearns as Tommy Marshall (left) and Edward Holcroft as Arthur Kinnaird in "The English Game."

Just as the toffs feared, the game did get vulgarized, commercialized — and globally popular. “They didn't accept that this was a game that had found its way into the heart of the working class in a way that no other game ever had. The idea that a little group of Old Etonians could hang on to it was a fantasy, really."

Like Downton and Belgravia, the ripping story has historic significance. “I loved the way it was a playing out in miniature of what was happening all over Western Europe — the days of the landed interests keeping everyone else under control were coming to a swift end. The middle classes and the working classes were taking over the show."

Fellowes’ career isn't coming to an end, and he's glad he didn't win success until he was a grownup: “You're less likely to go crackers. You retain a fairly grownup vision of the industry.” It helps that his popularity — especially among grownup viewers — keeps increasing. Next up is his class-clash HBO drama about 1882 America, The Gilded Age, with Christine Baranski, 67, and Cynthia Nixon, 53. It will start production “when the coronavirus goes down. I haven't any immediate plans to retire because people keep coming up with rather nice things for me to do.”