A yellow-beaked, red-headed and extremely brash woodpecker with a machine-gun laugh made his debut 70 years ago Thursday in the Andy Panda cartoon Knock Knock. In the seven-minute animated short, Woody Woodpecker enraged Andy's phlegmatic father by pecking holes in his roof and pinching his nose, laughing ha-ha-ha-ha-ha in his high-pitched voice every time he got the better of him. The staccato laugh would soon be mimicked by kids everywhere.

Producer Walter Lantz's first superstar, Woody appeared in 198 theatrical shorts, the cartoons that preceded feature films. He was voiced by Mel Blanc for a few years, followed by Ben Hardaway, who also animated the character. But in most of the shorts, Grace Stafford, Lantz's wife, supplied his voice.

The "Woody Woodpecker Song," which became the regular theme in 1948 and was nominated for an Academy Award, began "Ha-ha-ha-ha-ha.

Ha-ha-ha-ha-ha. That's the Woody Woodpecker song." Lantz told the New York Times in 1944 that it took 30 cartoonists, 30,000 drawings and a staff of 65 people to create one cartoon every four weeks. While technology has changed the way the drawings get to the screen, it still takes a large number of artists to create the drawings, Jerry Beck, an animation historian and author of The 100 Greatest Looney Tunes Cartoons, told the AARP Bulletin.

"What we don't have today is a whole league of people who trace the drawings onto celluloid and then paint each frame and photograph them," Beck said. "As late as the Little Mermaid and possibly some features beyond that, animation was still made in that old-fashioned way, the same way Walter Lantz did."

Lantz retired the character in 1972 and stopped making cartoons altogether in 1976. He died in 1994 at age 94. "He was quite old by 1972, and decided he could live on the merchandising for Woody," Beck said. "He became an elder statesman of animation." 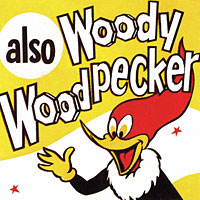 Woody Woodpecker isn't the only animated character having a milestone birthday this year. Here are a few others:

Walker, who has written several books on comics, including the just published Doonesbury and the Art of G.B. Trudeau, said the long-lasting comics celebrating anniversaries this year are among the greatest comic strips of all time. "They have endured mainly because of the nature of comic strips — they provide a daily visit from your friends and tend to grow on people," he said. "The best of them stay around for a long time."


Kitty Bennett is a news researcher and writer living in St. Petersburg, Fla.