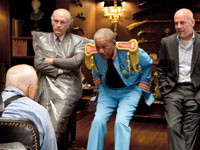 It's got Helen Mirren manning a machine gun, John Malkovich bristling with explosives, Morgan Freeman slapping Richard Dreyfuss, and Bruce Willis smirking into the faceless masks of a CIA death squad. If none of that sets your middle-aged motor running, then you'd best get back to your PBS fund drive and forget Red, the delightfully delirious action comedy that pits the veterans against the young guns – you don't even have to guess who ends up standing astride the enemy, thumping their chests in victory.

Based on a graphic novel of the same name, Red (the name stands for Retired, Extremely Dangerous) is nominally about a group of former CIA operatives who suddenly find themselves on a government hit list. To find out why, and for their mutual protection, they decide to, in the words of Freeman's character, "get the band back together." But the movie is really about the timeless battle of youth versus experience; abs versus absolute competence. Of the four top players, only Willis is a bona fide action star, but director Robert Schwentke has cleverly cast three of the screen's smartest actors as his partners. One look at the triumvirate of Mirren, Malkovich, and Freeman assures us that when it comes to a battle of wits with those smartypants youngsters, well, it's not even fair.

The veteran supporting cast excels, as well. Dreyfuss, as a hotshot businessman who just might know why our heroes are in the crosshairs, is a wonderfully unlikeable foil. And perhaps the most welcome presence of all is 93-year-old Ernest Borgnine as a wise CIA archivist who shares a healthy disdain for the new breed of agents (he calls them "thumbsuckers"). I asked myself if Schwentke could have come up with an active actor who's any older than Borgnine to play the part, and I could think of only one: Eli Wallach. He's 94 – and a couple of weeks ago he nearly stole the show from Michael Douglas in Wall Street: Money Never Sleeps.

As art, Red could hardly be less significant. But it may well mark a milestone in the way Hollywood looks at older actors, who on the rare occasions they land starring roles are too often consigned to brooding, heavy dramas. Red is big-budget, indiscriminate fun, and it's a rare treat to see such a film with stars who could qualify for the senior discount to see their own movie.