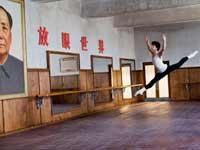 "I dance better here. Feel more free," declares a Cold War-era Chinese ballet star who has defected to the U.S., in Mao’s Last Dancer. A central character with such a straightforward motivation for abandoning his native country could easily become a simple mouthpiece for stereotypical anti-Communist propaganda — but in the hands of veteran director Bruce Beresford (Tender Mercies, Driving Miss Daisy), he is much more than that. Li Cunxin, portrayed by three different actors as he moves from childhood to adulthood, is a complicated person who, in the end, forgoes personal ambition to follow his heart.

Based on Cunxin's best-selling memoir, Mao’s Last Dancer is a saga that no one would believe if it were made up: it’s a coming-of-age film, a political drama, and a love story all in one. Shot in China, Houston and Australia, the movie begins with Cunxin’s childhood in a remote mountain village. The year is 1972, and Mao Tse-tung and Madame Mao have reopened the Beijing Dance Academy. Cunxin’s mother, played masterfully by Joan Chen, relinquishes her 11-year-old son to government officials when he is chosen to train at the academy. There, he is transformed into a brilliant dancer who will represent communist China on the world stage.

But when Houston Ballet artistic director Ben Stevenson (played by Bruce Greenwood) manages to get Cunxin to Texas for a brief stint in 1981, everything changes. Cunxin (played at that point by Birmingham Royal Ballet star Chi Cao, in his screen acting debut) encounters an America that, contrary to the Chinese government’s grim portrayal, is wildly luxurious and permissive. For the first time without fear of reprisal, he watches movies of Soviet defector Mikhail Baryshnikov. He falls in love — and rushes into marriage so that he may stay in the United States. Officials from Houston’s Chinese Consulate attempt to kidnap him, but when U.S. reporters publicize the plot, China offers Cunxin a heartbreaking choice: In exchange for freedom in the West, he must give up the possibility of ever seeing his family again.

Mao’s Last Dancer is at its finest when it offers a window into history. Watching the People’s Republic of China machinery in action during the '60s, a period when one of the most politically repressive regimes in history was in power, is mesmerizing. The dance scenes and the romance between Cunxin and American ballerina Elizabeth Mackey (Amanda Schull) seem a bit too quiet. As a result, some of the film’s key moments, when the audience should be cheering Cunxin’s against-all-odds achievements, leave us wanting more.