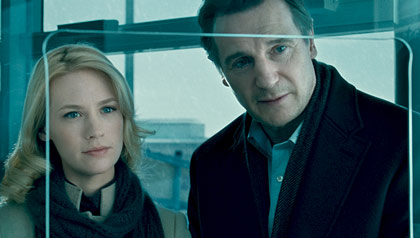 En español  |  Oh, Liam. Why? The soulful star of Schindler’s List and Kinsey has for some perplexing reason taken up schlocky action hero roles of late (i.e., Clash of the Titans, The A-Team), putting his innate, intriguing talent to waste. OK, Liam Neeson has done some earlier decent action turns, including as Gui-Gon Jinn in George Lucas' Star Wars: Episode 1 — The Phantom Menace. But his latest vehicle is the poorly written, nonsensical Unknown, directed by Jaume Collet-Serra of House of Wax and Orphan fame.

The movie opens as Neeson, who plays a renowned American scientist named Dr. Martin Harris, lands in Berlin for a world summit on biotechnology. As he and his lovely wife, Elizabeth (January Jones of Mad Men), arrive at their hotel, Harris realizes he’s left his briefcase back at the airport and hops into another cab while his wife checks in. The cab crashes into an icy river, and the driver (Diane Kruger of Inglourious Basterds, playing an illegal from Bosnia) drags Neeson from the wreckage. When he wakes from a coma four days later and returns to the hotel to meet up with Elizabeth, he finds that another man, played by Aidan Quinn (Legends of the Fall), has taken his place — his identity, his history, his papers. As Elizabeth claims not to know who he is, Neeson sets out on a quest to reclaim himself as the real Dr. Harris, while mysterious agents, an assassin named Rodney Cole (played by Frank Langella, another veteran actor who deserves better) and a gang of terrorists who are plotting the murder of a Middle Eastern prince set out to thwart him at every step.  And who comes to Harris’ rescue but the pretty cab driver and a former East German spy (award-winning European actor Bruno Ganz)? Why? We never find out.

The plot here is riddled with holes. The twists and turns make up one big unsolved puzzle. None of the characters intrigue in the least, and even the chase scenes, the explosions and car crashes fail to excite. Unknown’s title is the only thing right about this big-budget film — it’s unknown why it couldn't have been any better.

Hollywood has made respectable progress in offering up projects that bring out the best in actors 50 and older. Just look at last year’s The King’s Speech, The Company Men and Unstoppable. Such films have even left the viewer wanting more. Neeson, Langella and Ganz should take a cue and look harder for their next role. As we at AARP The Magazine know, it's not too late.