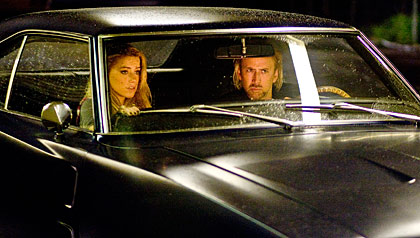 A movie about a man who escapes from hell to rescue his orphaned granddaughter from the clutches of blood-lusting Satan worshippers amid car crashes, exploding tanker trucks, and magical bullets called “God Killers” would seem to be aimed exclusively at those 14-to-18-year-old boys whose hormones kick into high gear the moment a screen character says, “Let’s do this thing!” And while Drive Angry undeniably delivers those goods, it also serves up lots and lots (and lots) of gratuitous nudity, one pretty darn graphic sex scene, and enough F bombs to make Eddie Murphy say, “I’m offended!” So the film is rendered unavailable to its natural audience, and I’d strongly suggest that Child Protective Services stake out any theater that’s showing it, just in case any misguided adult turns up with a kid in tow.

Remember when Cage was the go-to guy for playing thoughtful characters in quirky little masterpieces? Even after he slummed so spectacularly in National Treasure, I was willing to give him a lifetime pass for every Leaving Las Vegas, Moonstruck, and Raising Arizona he bequeathed us.  But that reservoir of good will was severely tested by the likes of Gone in 60 Seconds, The Sorcerer’s Apprentice, and Ghost Rider (for which he’s now filming a sequel, Heaven help us).  And while he found at least partial redemption with truly masterful performances in the recent Bad Lieutenant: Port of Call—New Orleans and World Trade Center, as he nears age 50 Nic Cage the Action Star is rapidly absorbing all memory of Nicolas Cage the Most Interesting Screen Actor of His Generation.

To show you how bad it’s getting in Cageville, consider that by far the most interesting character in Drive Angry is not the star’s grim-faced hellfire refugee, Milton (whose name, certainly meant to invoke the author of Paradise Lost, serves only to remind us that this clanging, cliché-ridden script isn’t worthy of Milton Berle).  No, the guy we’re really intrigued by is The Accountant, a black-suit-and-tie-wearing middle manager from hell who’s assigned to bring Milton back to Hades. As played by the stone-faced, hawk-nosed William Fichtner, The Accountant goes about his business with all the deliberation and calm assurance you’d expect of a fellow who has all eternity to get the job done. He is great fun; really the only fun you’ll have should The King’s Speech be sold out and you have to settle for 104 minutes behind the wheel with Nic Cage, who desperately needs someone to pre-read scripts like this one, look him in the eye and say, “Step away from the vehicle!”