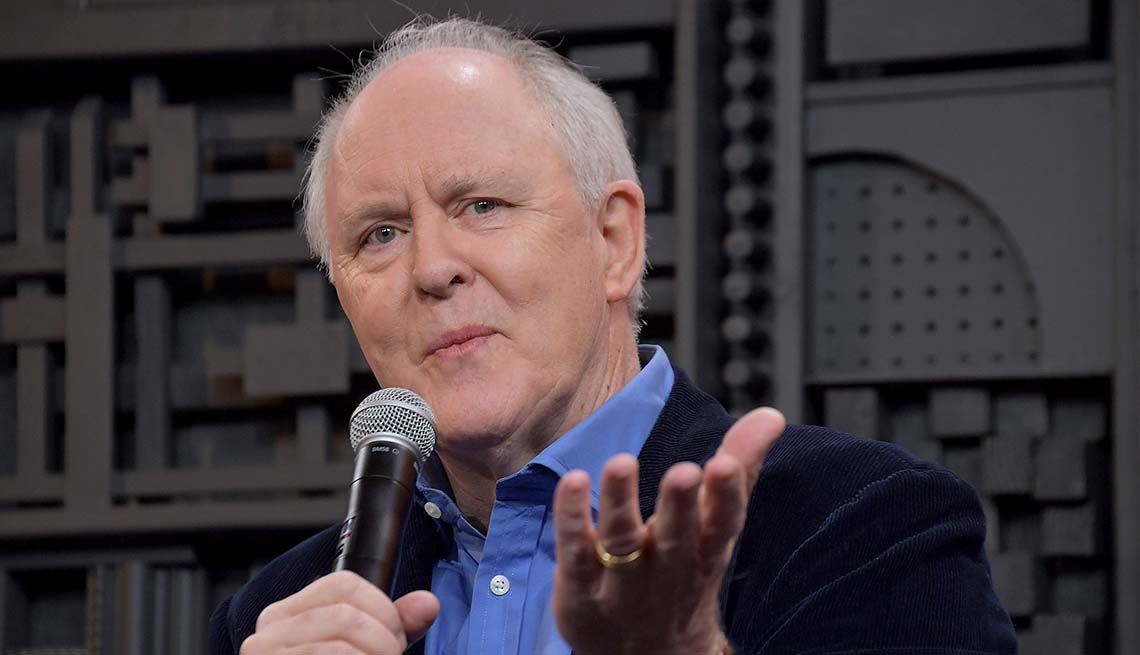 John Lithgow, 73, has mad range, playing everyone from the chief alien on the seminal sitcom 3rd Rock From the Sun to Winston Churchill on The Crown, which fetched his sixth Emmy. He's on Broadway with Laurie Metcalf, 63, in Hillary and Clinton, and he'll star in HBO's Perry Mason reboot. In The Tomorrow Man (opening May 22), Lithgow plays the title character, Ed, a divorced retiree, who talks back to TV news and stores canned goods for the apocalypse — until he meets secretive senior Ronnie (Blythe Danner, 76) at their local grocery store and woos her.

Lithgow discusses his belated status as a romantic lead, his decades-long marriage, and the effect of grownup stars on young ones.

How does it feel to be a romantic leading man in your 70s?

Thank God it's finally happened! It's not exactly been my stock in trade. When the time came it was bound to be a very quirky character. That's exactly what I love about Ed — he's so prickly, unexpected and sweet. And with Blythe Danner's Ronnie, these two characters are wrapped up in their own little worlds. They misunderstand each other, and then they split up, and get back together. You don't see that very often between two septuagenarians.

And while you don't go full frontal, you do jog around your bachelor pad in your underpants. Was that, um, challenging?

It doesn't matter anymore. On Broadway with Laurie Metcalf in Hillary and Clinton, I spend half the play with very short running shorts without any apologies whatsoever. I gave up shame long ago. 3rd Rock from the Sun kicked all the embarrassment out of me. We were just completely shameless for six years. When you show your vulnerability, that's a wonderful color to add to any character. Tomorrow Man's Ed is so alone. He's the guy who sits around in his underwear, spending the whole day watching the news on TV. To me, it seems very authentic.

Given that you're John Lithgow, Harvard alum and famous actor who's played Churchill and King Lear, do people expect you to drip wisdom?

I don't know about wise, but I do remember how I felt working with actors 40 years older than me: Jason Robards and Colleen Dewhurst. You automatically have this feeling you've been invited into a long, long tradition that is so honorable, so splendid. I work with a lot of younger people. I don't know how they perceive me. Does my experience make me intimidating? They can still ignore me, and ridicule me behind my back. But I've been around a long time, and I've survived, and when you are a young actor you pay attention to that.

How young were you when you began acting?

I grew up in a theater family, acting before I can even remember. My father produced Shakespeare festivals and so I grew up with the foundation stones of an actor's craft. That start always gave me the feeling that I knew what I was doing, even at 18 or 19. At Harvard I was a campus star within two weeks.

You've made a reputation as a reliable actor who can play comedy or tragedy, sitcom or PBS historical, or scary movies. Do you ever doubt your talent?

Of course. That doesn't go away. When I think, “Boy, I just can't do this role,” that's often when I do my best work. A rehearsal period is a process of flailing around. We're in a business where you put your insecurities to work.

Has maturity eased that anxiety?

It's a good thing to grow old and know you've accumulated a lot of experience to get over your fears. I know who I am by now. I have many other things in my life that are just as important to me as acting, if not more so. My family. My wife. I entertain children. I have a book of poetry coming out in the fall. I danced for the NYC Ballet and sang with Met Opera stars at Carnegie Hall. I've had these extraordinary opportunities. I tend to think that both grounds me, and makes me levitate.

You have highly developed acting skills — what don't you know?

Sciences and math. I had a spotty education in eight different schools. Never took a single chemistry class. I've grown up thinking I missed out there. Also, I can't read music or play the piano. I play a mediocre guitar.

You make wonderful music with Danner, and sing “Muskrat Love” together. Was it easy falling in love with her on screen?

That was easy. I've known her for years, although I didn't know her that well. I knew we'd have a wonderful and easy time together — and we did!

We never stopped talking. We had 1970s theater in common, so many mutual friends, and we would tell stories over and over. We bored everybody to tears.

Watch: An exclusive clip from 'The Tomorrow Man'

You make falling in love at a grocery store so romantic. How does that echo your memories of wooing your wife?

How did you meet your wife?

I met Mary when both of us were a few years after our first marriages in our mid 30s and we fell in love like high school kids. Total infatuation. Two years passed before we got married, but we talked about getting married after two weeks.

She's a retired professor as of last December, after 40 years teaching economic and business history at UCLA. I was almost the first actor she'd ever met — and she'd never heard of me.

Is it a challenge that she's not in the industry?

We've always had completely different worlds and rhythms of life and two different circles of friends. She's not crazy about the role of stage-door johnny. She's always been bewildered by the whole urge to act or perform, but she's used to it by now.

You've played King Lear, and, now Glenda Jackson, 82, is too. If we're flipping gender in Shakespeare, what female role would you like to play?

He didn't write too many great roles for older women. Gertrude in Hamlet; Volumnia in Coriolanus. I would have loved to have played Viola from Twelfth Night or Rosalind in As You Like It when I was young. At 6 foot 4, I'm a little bit tall for that, it seems to me.

Well, yes, but who'd you find for Macbeth, then? Brian Dennehy? You'd need a big man.