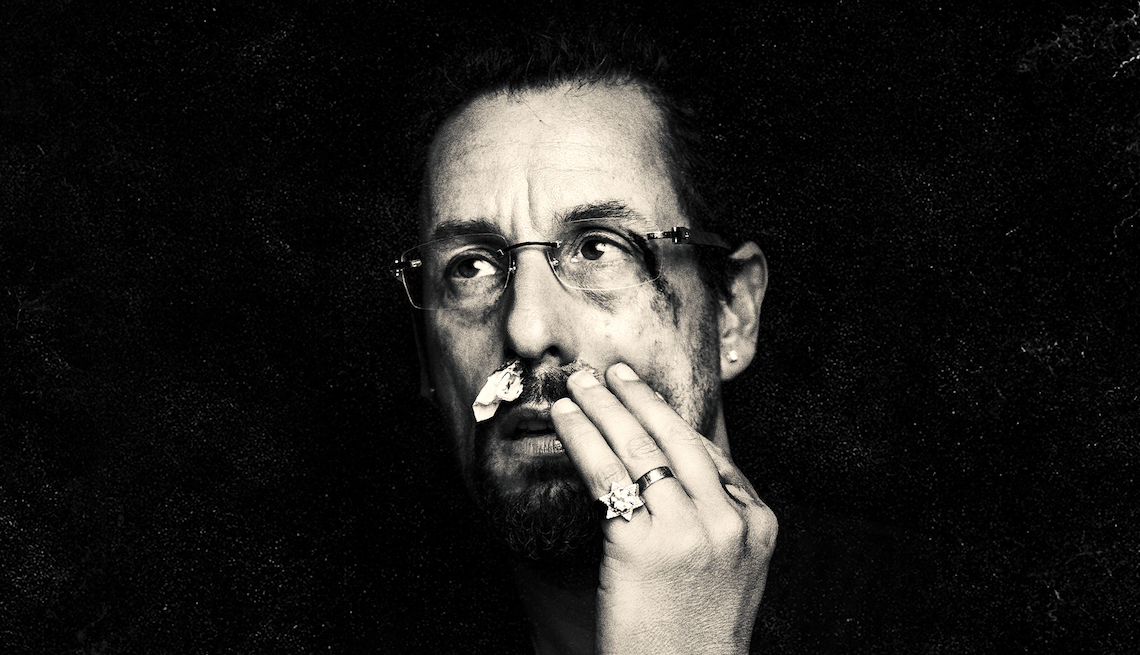 En español | I never understood why anyone thought Adam Sandler, 53, was so funny that viewers spent $4 billion to see his comedies. That nasal fake-child voice is excruciatingly grating. But as a dramatic actor, he's been good for years, and he's never been as impressive as he is as the New York jeweler, gambler, dreamer and self-defeating buffoon Howard Ratner in Uncut Gems. His office is so crummy the door keeps getting stuck, which comes in handy when angry mob types visit to inquire about Howard's ever-proliferating debts and find themselves trapped behind the glass, shouting threats.

Howard has more than mobsters to fret about. His wife (Idina Menzel, 48) calls him “the most annoying person I have ever met. I hate being with you, I hate looking at you, and if I had my way, I would never see you again.” She has a point, though for some reason Howard's dishy mistress (Julia Fox) loves him anyhow — not that she'll pass up the flattering opportunity to get pawed behind closed doors by the rap star The Weeknd, provoking Howard's hypocritical jealousy.

Still, appallingly sleazy as he is, Howard is a fool who has his charms. Even his annoying, keening voice is redeemed by his clueless kindliness — and in the context of a character we care about, it's funnier than ever. Howard's heart is as sweet as his mind is unwisely imaginative, and his ambition is quenchless. When he loses a sports bet, does he give up? No! He pawns something someone loaned him and makes another bet to cover it. Then another to cover that, robbing Peter (and as many others as necessary) to pay Paul.

What's going to save all his bets is one big grand slam. Because he's gotten hold of a magic rock, a big chunk hewn from a mine in Ethiopia that glitters with opals. In a dazzling opening scene, we visit the mine, then plunge Fantastic Voyage-style deep into the gem's mysterious interior. Then there's a dazzling cut to another passageway — which turns out to be the video of Howard's colonoscopy.

It's a sardonic metaphor for where his glittering vision of a million-dollar score might well lead him, and also a fine example of the film's clever, frenetic cinematography. The whole movie feels like the last part of Goodfellas, when the hero is on a cocaine bender and the camera gets a contact high. Howard's drug of choice is the greed unleashed by that giant uncut gem he got through shady connections and plans to sell at a hoity-toity auction house.

But his acquaintance Kevin Garnett, the pro basketball player (played effortlessly well by the real Garnett), also has passionate feelings for the gemstone in question, and tries to buy it for big bucks before the auction. He needs it for luck on the court. Howard won't sell it for less than his wild-eyed hopes, but he's crazy enough to let Garnett borrow it for a few days, which puts him under pressure from the auctioneers.

And as if that weren't enough, his sinister brother-in-law (the brilliant Eric Bogosian, 66) is demanding the money Howard owes him, right now — though he, too, seems wowed by Howard's astounding boldness in reaching for his dream. Besides, Howard tries to be the best family man he can. He dutifully attends his daughter's school play. When he spots a couple of criminals in the audience who may want him dead and he has to flee, is that Howard's fault?

If Preston Sturges, master of rapid-fire comic dialogue, had written Abel Ferrara's gritty Bad Lieutenant while cribbing from Martin Scorsese's Mean Streets, it wouldn't be any better than this irresistible crime caper flick. And if Sandler doesn't land an Oscar nomination for this, he was robbed.