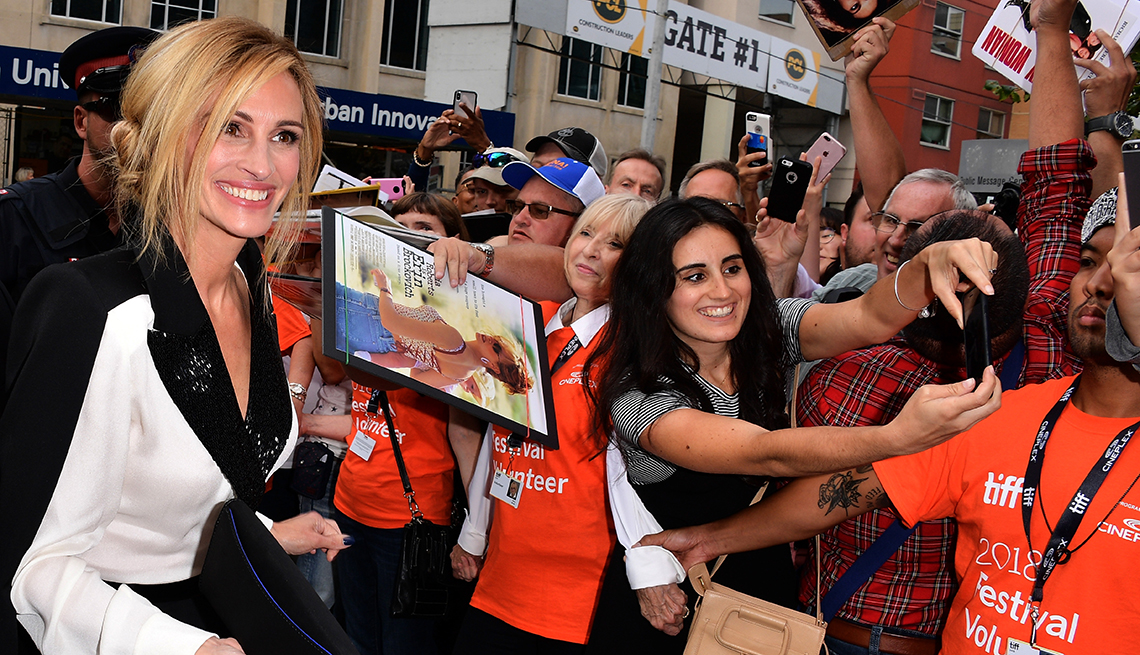 Julia Roberts greets fans outside the Toronto International Film Festival before the premiere of "Homecoming," her upcoming drama series on Amazon Video.

Hundreds of thousands of film fans are in Canada this week to watch the biggest movie stars on earth in the flesh and on the screen at the Toronto International Film Festival (TIFF). The annual gathering of those who make movies and those who write about them is a kickoff to the coming awards season, and it's a crazy scene in the streets. Thousands throng for a tiny glimpse of the actors they love, roaring like a great beast when they see the biggest names emerge from limos to strut the red carpet into their world premieres.

The loudest roar over the weekend may have been for top grownup star Julia Roberts, 50, who’s triumphantly unveiling two big projects in Toronto: Ben Is Back , an emotional roller-coaster about a mother and her recovering addict son, and Amazon’s new TV mystery series Homecoming , in which she plays a counselor for returning war veterans in a shady treatment center.

“Julia, do you know how long we’ve been waiting for you?” wailed one fan who had waited for Roberts at the back of a theater only to see her enter another limo. With rubberneckers in front and back and block-long lines of ticket holders (and those waiting hours hoping to score a ticket) at the sides, the theater was boxed in by the crowds.

The main theater street has been transformed into a public square, not only for celeb worship, but for discussing serious public issues. Masked animal-rights activists did street performances to enlighten minds, and actress Geena Davis, 62 — in Toronto to promote her climate-change documentary This Changes Everything and her Institute on Gender in Media — rallied the festival-goers against sexism in Hollywood and the nation. “Why are we teaching kids something that we try so hard to get rid of later on?” she asked as the crowd cheered. “Why are we training them to have unconscious gender bias from the beginning when we know that it is so hard to get rid of?”

In the #MeToo era, that message was seen all over the festival — in women-centric movies like the superb Widows, a combination heist flick and social-issues film about an all-female gang led by Viola Davis, 53; in The Front Runner, a factual drama about Gary Hart's 1987 presidential race scandal (which highlights the maltreatment of his Phi Beta Kappa date Donna Rice), starring Hugh Jackman, 49; and in the unprecedented, diverse group of journalists covering the festival. In support of Hollywood’s big push for diversity, for the first time TIFF gave hard-to-get credentials to 180 journalists from underrepresented groups, often footing the bill for their travel and hotels. 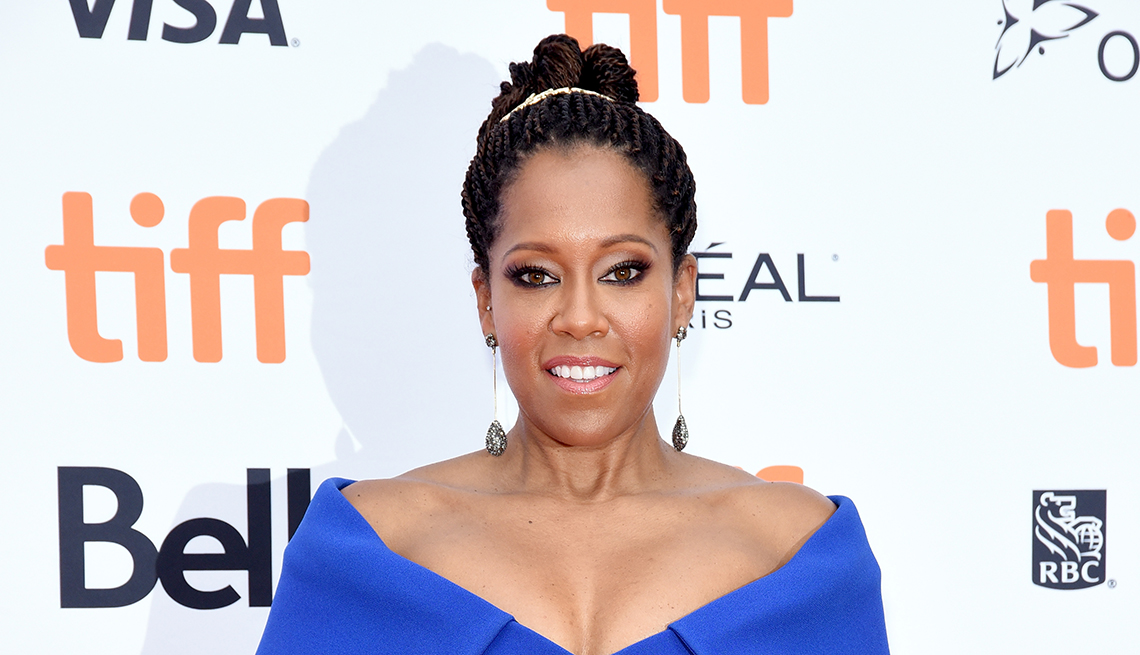 Regina King is generating Oscar buzz at the festival for her performance in "If Beale Street Could Talk," adapted from the James Baldwin novel.

This being the post-Black Panther era as well, racial diversity was apparent at TIFF. Regina King, 47, looks to be a leading Oscar candidate for her performance in If Beale Street Could Talk, the first major movie adaptation of this masterpiece by James Baldwin (the hero of last year’s Oscar-winning documentary I Am Not Your Negro). Music and movie giant Quincy Jones, 85, was honored in the doc Quincy, while Charlie Sheen’s long-vanished brother Emilio Estevez, 56, emerged to premiere his homelessness film The Public. Alfonso Cuarón, 56, got major Oscar buzz for his autobiographical Roma, and Javier Bardem, 49, and wife Penelope Cruz helped highbrow Iranian two-time Oscar-winner Asghar Farhadi, 46, try his hand at a thriller, Everybody Knows.

Another big theme addressed the burning social issue of drugs. There were six addiction flicks screened, most starring Hollywood veterans: Roberts in Ben Is Back; Steve Carell, 56, in Beautiful Boy; and Billy Bob Thornton, 63, in James Frey’s semi-fictionalized memoir A Million Little Pieces. White Boy Rick with Matthew McConaughey, 48; Natalie Portman’s Vox Lux; and Elisabeth Moss’ Her Smell round out the group.

It would be great if the big push for diversity and reform included a focus on grownup issues, but the prominence of lots of stars over 50 in Toronto spoke for itself, proving that experience still, perhaps even increasingly, counts for something in the entertainment biz. Robert Redford, 82, stars as a real guy who took a last crime spree in The Old Man & the Gun (probably his last movie); Julianne Moore, 57, and John Turturro, 61, play a couple of divorcees trying to revivify their lives on the disco floor in Gloria Bell; Judi Dench, 83, is in the nuclear thriller Red Joan (about the actual woman who gave England’s atomic bomb secrets to the KGB); and Isabelle Huppert, 65, gleefully torments young Chloe Grace Moretz in Greta, the Hansel-and-Gretel-inspired horror flick by Neil Jordan, 68 (The Crying Game, The Borgias).

Not that TIFF 2018 was always serious or worshipful. When somebody at the Homecoming premiere asked Julia Roberts – who wore the most stunning, Superman-caped Givenchy outfit you ever saw — what advice she’d give to aspiring actors, she quipped, “Never listen to an actor!”

Another major trend apparent at TIFF was the prominence of streaming giants, as well as traditional studios and ambitious independent cinema players. Susan Sarandon, 71, was on hand for her first YouTube movie, playing an ER nurse whose son is caught by terrorists in Viper Club, and Cuaron’s Oscar hopeful Roma just won Netflix its first grand prize, the Golden Lion, at the recent Venice Film Festival. Amazon shelled out much gold to fly in multiple cast members from its Homecoming  TV show, including Sissy Spacek, 68, who plays Julia Roberts’ mom. Spacek, who’s been enjoying a career renaissance lately, told AARP, “I'm an AARP member, and I love it.” In Homecoming, Dermot Mulroney, 54, reunites with Roberts, his My Best Friend’s Wedding costar, and plays her boyfriend. “Even though it will have a big youth audience since the director Sam Esmail created Mr. Robot,” Mulroney says, “this show definitely qualifies as adult entertainment for a grownup audience. Which is a dying art!” Added Spacek, “And it’s just like a movie, except longer.”