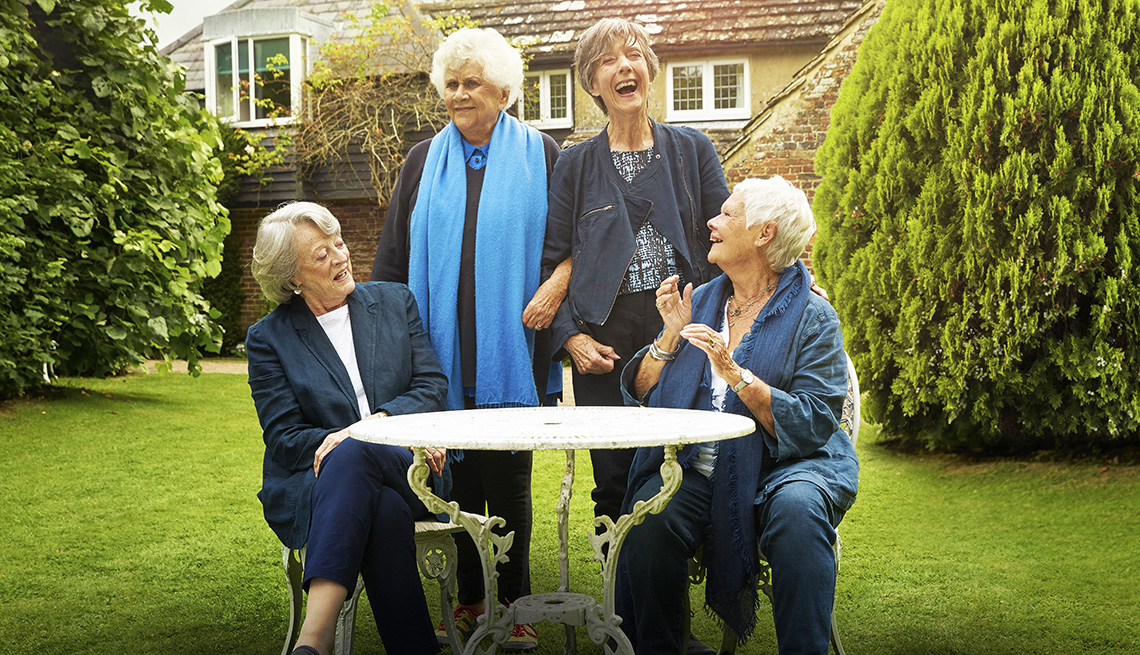 When the queen of England reveres an artist, she knights him, like she did Sir Paul McCartney. Or she makes her a dame, like the iconic actresses Dame Judi Dench, 83, Dame Maggie Smith, 83, Dame Eileen Atkins, 84, and Dame Joan Plowright, 88. Director Roger Michell, 62 (Notting Hill) had the inspired idea of inviting all four of them to tea at Plowright’s home in the English countryside to talk about their lives, loves and immortal work. And he filmed them, as tea gave way to champagne and they got bubbly together.

It’s quite informal, yet he wound up with the most-rave-reviewed movie of his career. This is one party you want to attend — not just because it’s a gossipy history lesson about high-profile legends who know how to tell a good story (supplemented with stunning scenes from their stage triumphs and films you'll want to watch), but because it’s an object lesson in how grownups can remain vital, contributing on a grand scale even as their physiques falter.

“Do we have three [good] eyes between us?” asks Dench, whose macular degeneration means that she can scarcely watch movies anymore. “My eyesight is so bad now, I can’t actually see very much,” she admits. “And so a friend of mine usually has to say, ‘He’s kissing her now.’ ” Yet Dench can still act with those eyes. And the movies she's made since turning 80 have grossed $800 million, while Atkins’ and Smith’s recent flicks have grossed $400 million (not counting Atkins’ TV hits The Crown and Doc Martin and Smith’s Downton Abbey and its forthcoming film). Plowright’s macular degeneration forced her to turn down the role of Helen Mirren’s mom in 2006’s The Queen. She has retired, but she offers fascinating insights into her classic performances — from 1960’s The Entertainer, with her appalling, legendary second husband, Laurence Olivier, to 1999’s wonderful Tea With Mussolini, costarring Smith and Dench.

Attractively irascible Smith — they call her “Mags” — confesses she’s never watched her six-series box set of Downton Abbey, and jokes: “I won’t last long enough to see the wretched thing, will I?” When Dench says, “We’re going to work forever if we’re asked,” Smith retorts: “But you’re always asked first!” It’s great fun to hear them recall wild times in the 1960s (“We behaved pretty badly actually, Judi,” Atkins says) and tattle on their old colleagues and exes, ranging from Olivier — who punched Smith onstage at the National Theatre when he was her boss and costar — to Robert Stephens, Smith’s brilliant, adulterous ex and The Prime of Miss Jean Brodie costar. To illustrate Stephens’ alcoholism, there’s a dazzling clip of her asking him, “Shall we get roaring, screaming drunk?” in Noel Coward’s Private Lives.

The dames impart the wise advice they would give to their younger selves (“Try not to be so susceptible to falling in love,” Dench says) and cast light on the plight of still-youthful people trapped in aging bodies. Last summer, Dench was “stung on the bum by a hornet,” and a paramedic who she said looked 17 condescended to her horribly, asking, “What’s our name?” and “Have we got a [caregiver]?”

“F--- off! I’ve just done eight weeks of The Winter’s Tale at the Garrick Theatre!” Dench snapped to him. “There’s a very, very fine line, because you need help,” she observes; she just feels that grownups ought not to be treated by youngsters as “a kind of invisible person who’s standing next to you.” Tea With the Dames makes you see these four geniuses more deeply and realize that impaired vision isn’t their main problem — it’s society’s occasional blindness to the value of our most mature, most valuable talents.