Phantom Thread is a perfect film, but that doesn’t make it a good movie. Satisfying moviegoing experiences all depend on what you want: absolute technical mastery of every punctilious detail of filmmaking and, in this case, a gorgeous British period setting to make Merchant-Ivory fans swoon? Or a spellbinding story with characters you care for and about, even if they’re appalling people?

These characters are tantalizingly intriguing, which makes it all the more exasperating that director Paul Thomas Anderson is so stingy about plot and character exploration. In his last role ever, the mad Method actor Daniel Day-Lewis (who is inexplicably retiring from film at age 60) plays Reynolds Woodcock, designer of exquisite clothes for rich women in 1950s London. He lives for his work in a sumptuous townhouse that’s a character in itself, full of genius seamstresses executing his artistic visions (and the actors are all real seamstresses, some of them experts from the Victoria and Albert Museum). As he glides down voluptuously curvy stairways to plunge into the agony and the ecstasy of creation, the camera's swoop is as butter-smooth as the polished handrails.

His partner and business manager is his sister, Cyril (Lesley Manville, who steals every scene from Day-Lewis and is enjoying a career upsurge at 61). Her character is inspired by Judith Anderson’s Mrs. Danvers in Alfred Hitchcock’s Rebecca, who’s creepily close to her employer Laurence Olivier and cruel to his new squeeze Joan Fontaine. But Cyril isn’t simply crazy like Mrs. Danvers. She’s a rationalist, looking after Reynolds’ affairs, including the awkward matter of getting rid of a girl once she peeves Reynolds by demanding a relationship of him (or asking anything at all, or buttering her toast too loudly). Cyril pays the girls off with a Reynolds Woodcock dress as she ushers them out of the claustrophobic townhouse we’re all trapped in.

Then in comes somebody who shakes things up. Reynolds’ next girl is Alma (Vicky Krieps), no wilting Joan Fontaine but a young waitress from Luxembourg orphaned and exiled by World War II. Cyril is skeptical, protective of her brother, who bonded with her during their neglected childhoods. (Manville and Day-Lewis invented this backstory for themselves during filming, making their characters less thin.)

But Alma — whose name is an allusion to Hitchcock’s wife and constant collaborator — eventually impresses Cyril by sometimes standing up to Reynolds’ outrageous demands. Alma loves being his model and lover (we guess; there are no romance scenes), but pushes him for a normal relationship more willfully than previous girls. She poisons him mildly, to make him dependent on her. Manville says Reynolds knows she’s poisoning him, and rather enjoys being babied. He gets better fast, and their relationship heats up. If this were a normal movie, this would be a spoiler, but courtship by poisoning is no big deal and has scant consequence. It’s just another odd thing people take in stride in the House of Woodcock. 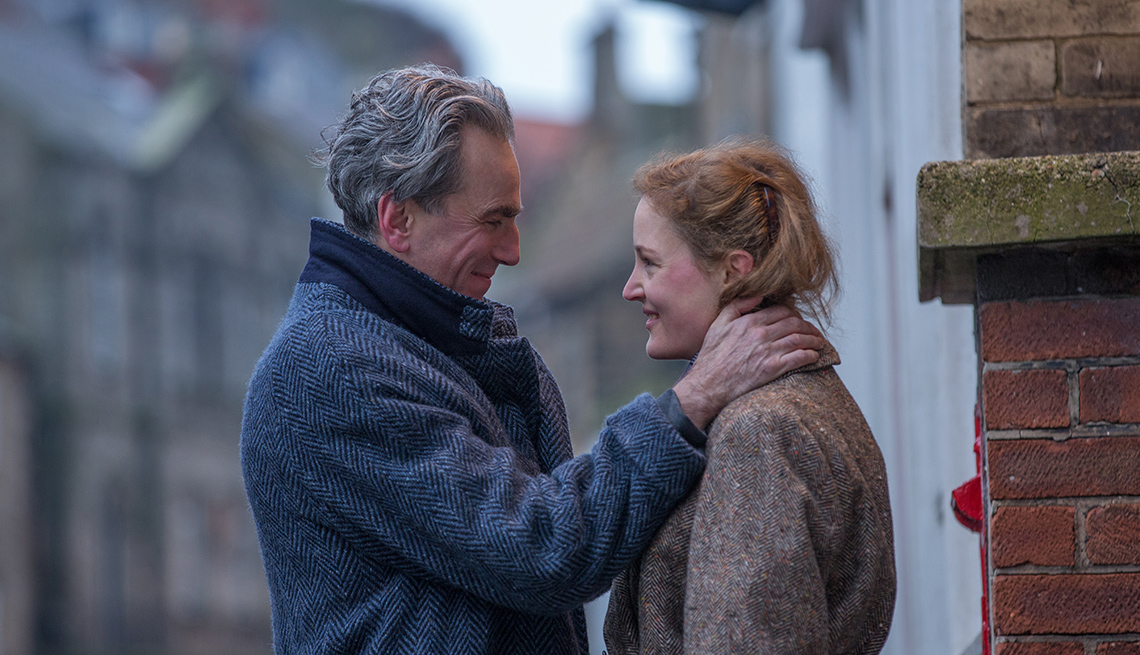 Cyril comes to admire Alma for having a spine, and though Cyril has never married and subsumes her life to her brother’s, she’s no doormat. In one exhilarating moment, she snaps at him, “Don't pick a fight with me. You won't come out alive. You'll end up on the floor!” Though the three-way emotional maneuvers of Alma and the Woodcocks seize your interest, it’s a parched sort of emotion, and the crucial sister-brother relationship doesn’t develop at all. After Cyril snaps at Reynolds, he backs off, but nothing changes, it's just a loose narrative thread. Worse, there are not nearly enough dramatic moments like Cyril’s threat. Anderson prefers to drop hints at what’s going on, relying on three astounding actors to convey entire soliloquies with the skillful arch of a brow and a stinging glance.

If you’re a connoisseur of acting, you’ll love it. Anderson would shoot 45 takes of a scene, polishing it to blinding perfection. Like Dunkirk and The Shape of Water, Phantom Thread creates an all-enveloping other world you fall into, and most highbrow cineaste types have fallen in love with it. The set design is astonishing, with each scene like a glossy page in the world’s most elaborate coffee-table book. It’s like Stanley Kubrick’s Barry Lyndon, which Pauline Kael called a coffee-table movie: “We might as well be at a three-hour slide show for art-history majors.” Like Kubrick, Anderson is a genius doing more and more about less and less while getting insanely more artistically masterful.

You can’t find better art than Phantom Thread: the costumes, the cinematography, the swoony music by Radiohead’s Jonny Greenwood (his best yet for Anderson), the ambitious allusions to film, art, fashion and literature. Critic Ty Burr thinks the film's shot of the honeymooning couple by a lake is a quote of the most famous shot of Mr. and Mrs. Vladimir Nabokov on their balcony playing chess, and that the entire film may be a fantasy in Alma’s mind, like the setup in Nabokov’s Pale Fire, a story that plays chess with the reader.

Whether you fall for this fable or not, you have to admit that the film achieves an elusive beauty worthy of Henry James or Proust. But you may also be reminded of James’ crack about what it’s like to read Proust: “inconceivable boredom associated with the most extreme ecstasy which it is possible to imagine.”