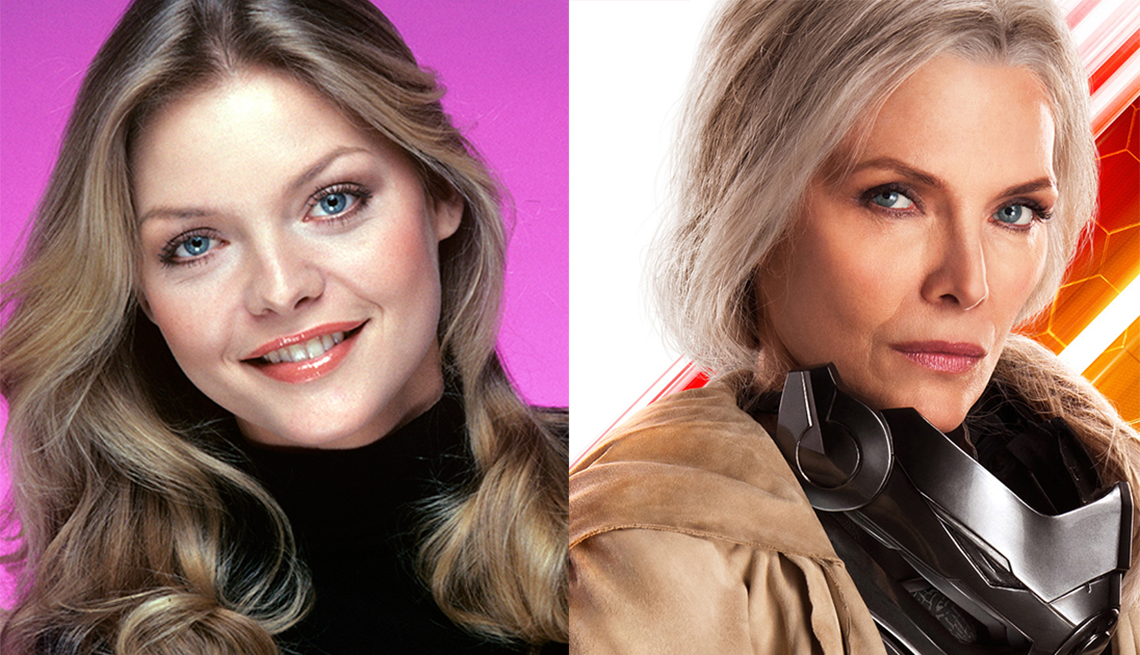 In the summer hit film "Ant-Man and the Wasp," filmmakers digitally de-aged Michelle Pfeiffer's character Janet Van Dyne to look more like her younger self, pictured at left in a publicity shot for the short-lived 1979 TV show "Delta House."

In the new Marvel Studios movie Ant-Man and the Wasp, Michelle Pfeiffer, 60, looks like her 30-year-old self in flashback scenes, thanks to Hollywood’s newest invention: computer graphic imagery (CGI) technology that de-ages actors.

Pfeiffer is not the only star who’s shedding decades on-screen thanks to de-aging. Next year, Samuel L. Jackson, 69, will look 44 in Captain Marvel, set in the 1990s, Will Smith will play both a hero his age (49) and a young clone of himself stalking him in Gemini Man, and Robert De Niro, 74, and Al Pacino, 78, will be de-aged to their Godfather-era faces in Martin Scorsese’s The Irishman, about Jimmy Hoffa’s murder. Hollywood Elsewhere pundit Jeffrey Wells estimates that de-aging tech will help push The Irishman’s budget to $250 million. “All this for a straight-goombah period crime drama that will most likely appeal to 35-and-overs,” says Wells.

That sounds great for grownup viewers, and actors, too. “This technology will allow over-50 actors to be cast in a wider range of roles,” says Tim Gray, Variety senior vice president. “Nobody can say ‘They're too old for this part,’ because the CGI magicians can make them look as young and as old as needed. A 70-year-old actor can play a character as well as his own grandson.”

Such CGI effects are not entirely new. “Hollywood VFX artists have been gently massaging the faces of major stars like Ben Affleck and Tom Hanks for years,” says Indiewire pundit Anne Thompson. But these effects were subtle, erasing a very few birthdays. The new de-aging tech began to get far bolder with 2008's The Curious Case of Benjamin Button, in which Brad Pitt, then 44, appeared at ages from 8 to 80. “Youthful flashbacks have been used for Robert Downey Jr. and Jeff Bridges; Denis Villeneuve’s VFX team recreated Sean Young’s AI character for Blade Runner 2049; and both Carrie Fisher and Peter Cushing were painstakingly brought back to life in Star Wars: Rogue One,” says Thompson.

Movie star ages have been rising ever since 1920, says Clemson University economics professor F. Andrew Hanssen. “The male median age rose from 38 to 40 between 1920 and 2011,” says Hanssen, who published a study on the subject, ”and the female median rose from 28 to 34. Our study suggests that technological changes allowing actors to look young for longer — improvements in cosmetic surgery, better knowledge about and use of diet and exercise, Botox — have increased the average age.”

And it is the most mature talents who benefit the most from technology. Among the oldest tier of stars, says Hanssen, “Leading male actors are now 60 to 66 years old, while they were roughly 50 to 55 years old during the 1920s and 1930s. For females, the change was even more dramatic: 50 to 59 years today, versus 35 to 39 in the 1920s and 1930s.” De-aging CGI is likely to accelerate this trend.

Not everyone agrees that de-aging is a helpful thing. “As we push for more representation of people of all ages in film, it seems just ridiculous that we are de-aging older actors and actresses,” says Melissa Silverstein, editor of the advocacy and education site Women and Hollywood. “We appreciate people for what they bring to a role, and age and experience is one of those things. This just seems so tone-deaf in the context of the push for diversity and inclusion across all of our culture.”

“The downside is that it will encourage Hollywood, and the rest of the world, to avoid natural aging,” says Variety's Gray, who fears an epidemic of films "where everyone looks perfect, nobody has age lines and everybody has great abs. The audience is going to get even more depressed that they and their loved ones are so ordinary.” He notes what made stars like Bette Davis and Audrey Hepburn great: “They all aged with character.”

“No one aged more gracefully and attractively on screen than Cary Grant,” says Deadline Hollywood film critic Pete Hammond, “and he knew just when to quit. De-aging movie technology is not the answer to a longer career. Talent is. And if there is anybody who doesn't need technology to be ageless, it is Michelle Pfeiffer.”