Like jewels bubbling from a tar pit, true stories of inconceivable bravery continue to emerge from the Holocaust. Among the latest is The Zookeeper's Wife — the true tale of a Warsaw couple, keepers of the city's zoo, who hid more than 300 Jews during the Nazi occupation of Poland. The movie is based on naturalist Diane Ackerman's 2007 best-seller of the same name.

Because it's a film, the casual observer may have trouble tweezing fact from fiction while the story unfolds. But as the end credits attest, Antonina Zabinska and her husband, Jan Zabinski, were true civilian heroes of World War II.

As the movie opens, the couple (Jessica Chastain and Johan Heldenbergh) are living in a sort of urban Eden, their lovely house set in the middle of a benign menagerie of tigers, camels, elephants and countless smaller birds and furry critters. Each morning Antonina rides her bicycle to the zoo's iron gate and swings it open to a horde of eager animal lovers.

But then comes the blitzkrieg of September 1939, and the Nazis compound their human atrocities by largely wiping out the zoo's wild inhabitants. A few are spared, but only so a jackbooted zoologist named Lutz (Daniel Brühl) can haul them back to Berlin for Der Führer's personal collection.

In twisted Master Race fashion, Lutz plans to crossbreed some of the critters to create distinctively Nazi hybrids. He also has his eye on the lovely Antonina, who conspires with her husband to string the German along just enough to distract him from noticing the couple has begun liberating Jews from the blockaded Warsaw ghetto. The couple hide the fugitives in the basement of their home, then spirit them to safety under cover of night.

Since its publication nearly a decade ago, The Zookeeper's Wife has joined its literary cousins The Aviator's Wife, The Time Traveler's Wife and The Paris Wife as favorite reads of women's book clubs across the land. That, and the well-publicized fact that the film was directed by a woman (Niki Caro) and written by a woman (Angela Workman), may tempt guys to stay home alone and clean paintbrushes or whatever. 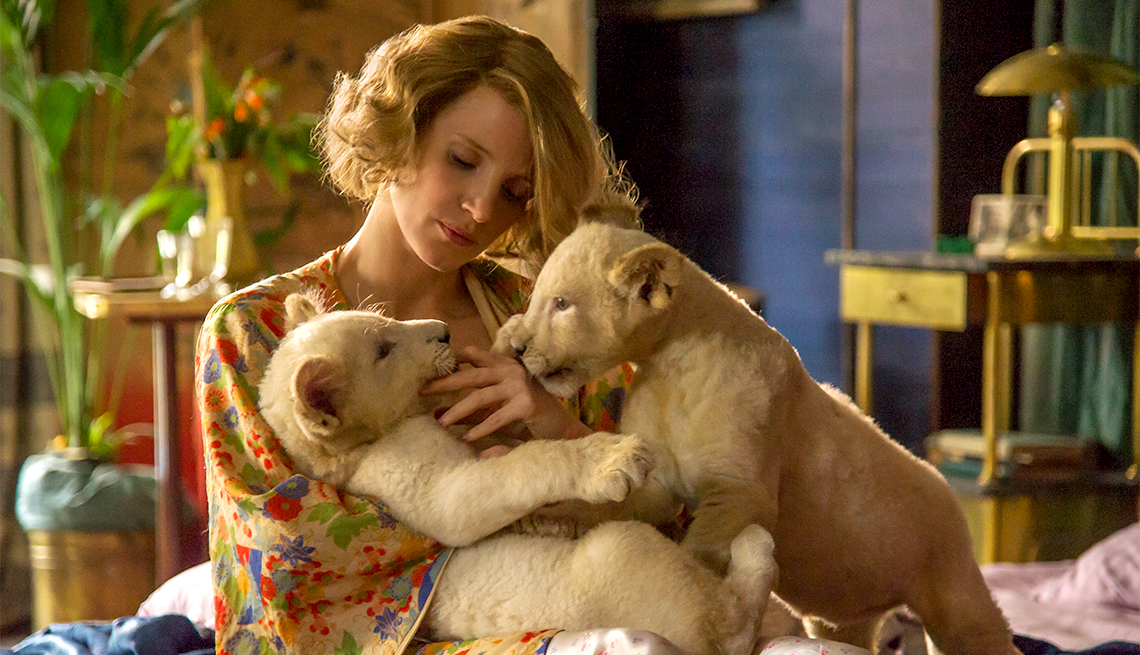 Which would be a mistake. For one thing, the film could just as easily be titled The Zookeeper's Wife's Husband, as Johan eventually leaves the relative safety of the zoo to join the resistance. (Darting through the ruins of bombed-out Warsaw, he figures heavily in some of the film's most striking moments.) Also, director Caro (Whale Rider; McFarland, USA) ratchets up the suspense from the first glint of a Gestapo officer's flashlight and brings a harrowing immediacy to scenes of street-by-street combat.

Caro's cast does a masterly job portraying individuals faced with the emotional conflicts of military occupation. Chastain adds another character to her diverse portfolio, including Oscar-nominated roles as a Southern belle in The Help and a determined CIA analyst in Zero Dark Thirty. Hatching plots that could get her killed, her Antonina somehow retains a semblance of the serenity she enjoyed in those early scenes,when we see her petting lion cubs or communing with bison. As her nemesis, Brühl — who challenges Christoph Waltz as the screen's scariest Nazi charmer — conjures up a surprising amount of sympathy for a guy torn between führer and fraulein. And then there's Heldenbergh as Antonina's husband, dutifully feeding the animals by day while picking off enemy targets with a sniper's rifle at night — all while conveying his troubled uncertainty at the direction his wife's duplicity might take her.

Caro is less successful in personalizing the objects of the couple's bravery. With one heartbreaking exception — a young girl who's been savagely assaulted by German soldiers — the individuals cowering in that basement get few opportunities to tell their stories. It's not a minor flaw.

Still, The Zookeeper's Wife is a well-told story of a time in history when the true wild animals were on the wrong side of the bars.