Innocence gets punched in the face by reality in the road-trip movie My Name Is Emily. But the damage is minimal — a bloody nose, a touch of newfound wisdom — and a teenage girl's stubborn hopefulness triumphs in the end.

The theme of human endurance would seem to arise naturally from Irish writer-director Simon Fitzmaurice, who created this endlessly charming film despite being paralyzed by motor-neuron disease. Unable to move his limbs or speak, Fitzmaurice directed the movie from a wheelchair, communicating with his cast and crew by using eye movements to activate a computer voice.

Given the circumstances, even a bad film by Fitzmaurice would be a staggering achievement. Miraculously, his smart script and nuanced direction entitle My Name Is Emily to take its rightful place beside such classic coming-of-age films as Sixteen Candles and Stand By Me.

Evanna Lynch (Luna Lovegood in the Harry Potter movies) stars as the title character, whose chilhood in Ireland has been marked by the car-crash death of her mother and subsequent oddball upbringing by her eccentric father, Robert (Michael Smiley).

How eccentric? An author and speaker, Robert champions a philosophy that urges people to have as much sex as they can, wherever they can. His off-kilter nature may be at least partly inheritable, for Emily's schoolmates label her a freak — a title her proud dad says she should wear like a badge of honor.

Robert slowly spirals into madness. In a heartbreaking scene, he is torn from Emily by the men in white coats. 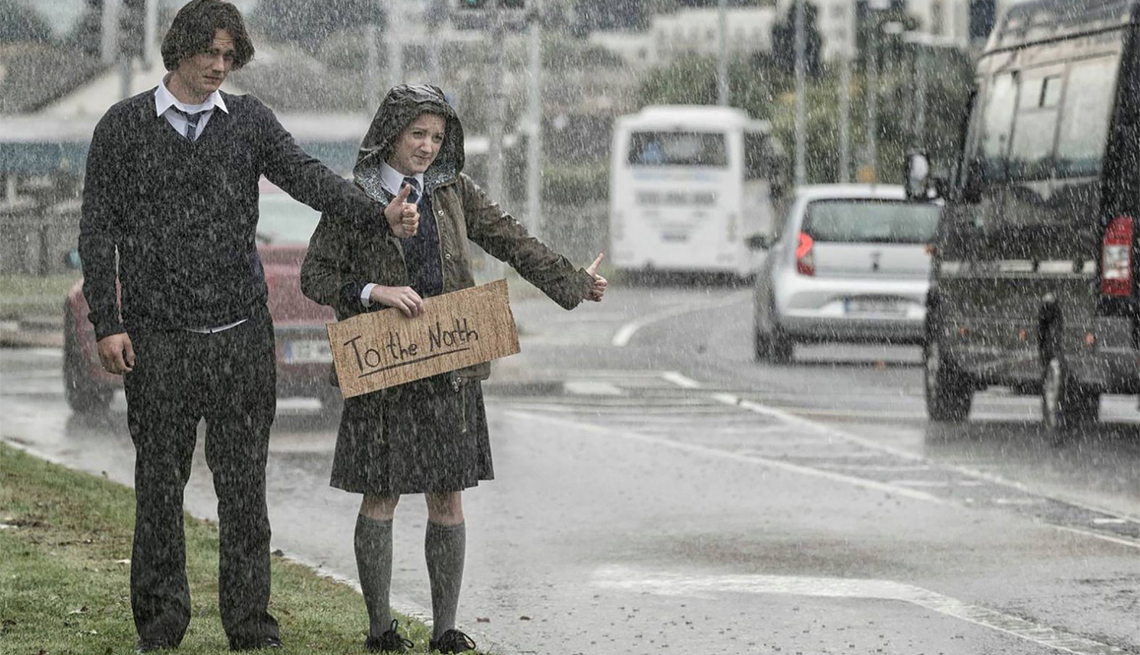 Years pass. When the expected card from Dad fails to arrive at Emily's foster home on her 16th birthday, she decides to take control of the situation: She appeals to Arden (George Webster, evoking a young Johnny Depp), an awkward classmate so smitten with Emily that he promptly agrees to her outrageous proposal: "My father's in a psychiatric institution, and I'm going north to break him out of the nuthouse that they've put him in. Will you help me?" Arden borrows his grandmother's vintage Renault 4 and they ramble across the Irish countryside together, getting to know one another and learning the harsh truth that life doesn't always measure up to one's expectations.

Lynch's Emily is a pleasingly complex lass — wise in the ways of the world thanks to her father's tutelage, yet naive enough to believe that sheer force of will can transform even the knottiest circumstances. If Emily rather ruthlessly capitalizes on Arden's infatuation, she never leads him on. And Lynch maintains a stalwart poker face throughout, inviting us to read Emily's emotions through her body language, alternately stiff-legged and limber. It's a lovingly physical performance elicited by a director who cannot move a muscle.

In the end, Emily is reunited with her father, albeit not under the conditions she had hoped for. In a few painful moments, the optimism and blind self-assurance of youth come face-to-face with the messy realities of growing up. The girl reels before these psychic blows but refuses to let them body-slam her. For Emily and her father — as well as for Arden, who tactfully retires to a neutral corner as the family stew thickens — the voyage will go on, replete with all the bumps and swales that pock the boggy road of life.