Lois Smith’s girlish otherworldliness stole scenes from James Dean in East of Eden, Jack Nicholson in Five Easy Pieces and Tom Cruise in Minority Report. Her career is white-hot at 86, and she steals Marjorie Prime, the smartest film ever about Alzheimer’s, from Jon Hamm, Tim Robbins and Geena Davis, who’ve never been better.

With eloquent quicksilver expressions, Smith plays Marjorie, a dementia patient who’s often sharp, intensely present, and ingenious even when her memory plays tricks. It’s a more absorbing character than Julie Christie’s in Away From Her, Judi Dench’s in Iris, or Julianne Moore’s in Still Alice.

Hamm plays a “Prime,” an eerily empathic, lifelike computer hologram from Senior Serenity Inc. — the rational, compassionate spitting image of Marjorie’s late husband, Walter, who helps her sift reminiscences and sort out feelings. He’s the only husband in history who listens, says, “I’ll remember that,” and does. Her bitter intellectual daughter, Tess (Davis), and jaded son-in-law (Robbins) program “Walter” with family lore: their sweet dog, Walter’s proposal after they saw My Best Friend’s Wedding (or was it Casablanca?). They don’t want Marjorie to remember her vanished son, who shared Tess’ relentless melancholy. 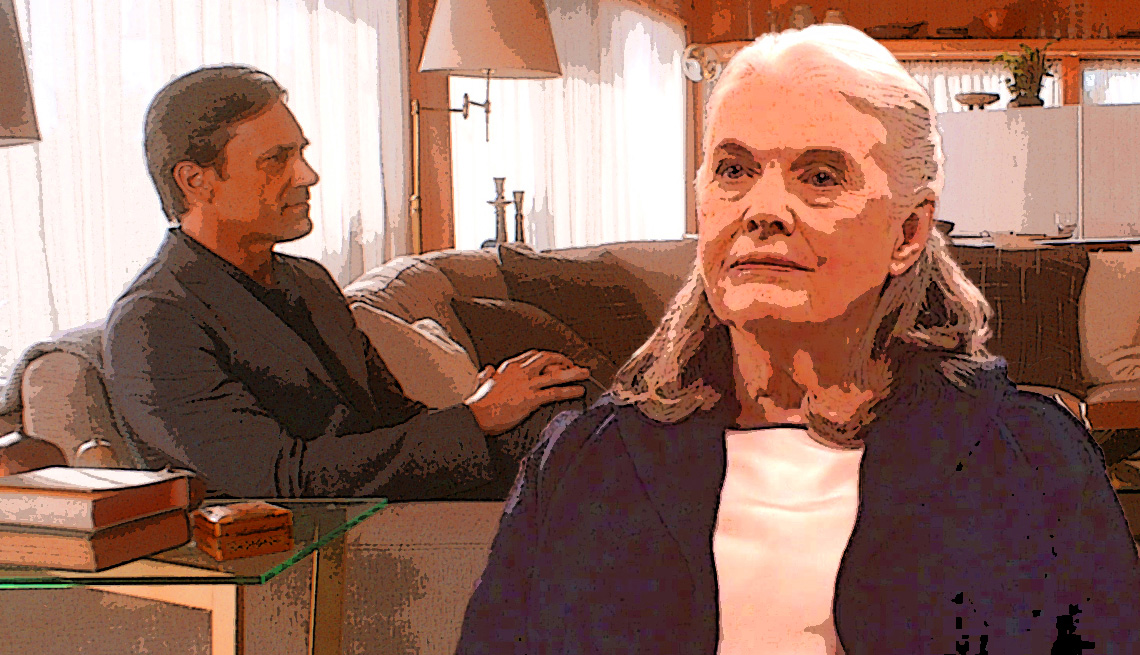 Bit by bit, we solve — nearly — the mystery locked in Marjorie’s head. If you want to see a Jon Hamm action flick, see Baby Driver. This is a deep dive into the human heart and mind, and the action is all in the acting. Hamm, 46, is as subtle as Jude Law’s robot in Spielberg/Kubrick’s AI or Scarlett Johansson in Her, and the faraway look that made Don Draper famous works well (if differently) here. You buy them as a couple — he helps reveal the girl within.

Robbins, 58, and Davis, 61, seem like they’ve been married 30 years. Nobody has ever outdone their portrait of an aging parent’s caregivers. Tess is dubious about her dad’s replica, but Robbins’ sardonic, Scotch-swilling family-history buff gets into programming … it, though Hamm makes him seem like a him. Robbins hasn’t had a part this good since 2003’s Mystic River, but the real news is Davis, criminally underutilized for 25 years (since Thelma & Louise and A League of Their Own). She won fame as a long-stemmed beauty whose bubbly tongue could scarcely keep up with her mind, but here she’s softly articulate, sharp like her mom, alienated from her (offscreen) daughter, angry, and quite scholarly about the neurology of memory and the mystery of human identity.

As if all this weren’t Oscar-worthy enough — and the play version starring Smith was a Pulitzer nominee — in the film’s last phase, Marjorie has died, so her daughter gets a Prime version of Marjorie. Smith knocks it out of the park as a semi-accurate computer rendition of the character, continuously improved by her daughter’s carping criticism. When Tess rebukes her for smiling more than the real Marjorie, you feel the resentment of youth and the searing grief of bereavement. Primes just want to be people, but the people they mean to please want the real thing. What makes us real to each other, anyway?

Tess rebukes herself for even talking to a hologram, accepting its digital pity. “Maybe I’m the Marjorie you still have things to say to,” says the haunting mom-bot. For everyone who has urgent unfinished business with somebody, or fears of dementia, or of being a caretaker, this movie has something to say.