At college, they dubbed themselves the “Flossy Posse.” Now at varying stages in their lives and careers, the posse of four friends in Girls Trip is headed to the Essence Festival in New Orleans for a much-needed rekindling of friendship and some serious partying.

There are at least four reasons to want to sneak into their emotional baggage: Ryan, Sasha, Lisa and Dina are played by Regina Hall, Queen Latifah, Jada Pinkett Smith and Tiffany Haddish.

Only Girls Trip — directed by Malcolm D. Lee, reteamed with his Barbershop: The Next Cut writers, Kenya Barris and Tracy Oliver — is less concerned with nailing the elusive sweet spot where the ribald and the tender meet than with competing with the glut of comedies that feature women behaving badly.

Introducing this misadventure in a voiceover is Ryan Pierce (Hall). A mega-successful self-help guru, she has the perfect marriage to a retired NFL star (Mike Colter) and is on the cusp of achieving what her latest best-seller touts as “having it all.” A retail conglomerate is interested in the couple becoming the faces of its brand.

When Essence magazine invites her to deliver the keynote address at its storied music festival, Ryan finagles an A-list experience for her friends, even though they’ve grown apart. Latifah portrays Sasha, the editor of an online gossip site. Smith is Lisa, a single mom and nurse who’s lost the balance between responsibility and intimacy. Haddish plays Dina, the loosest cannon in this arsenal. 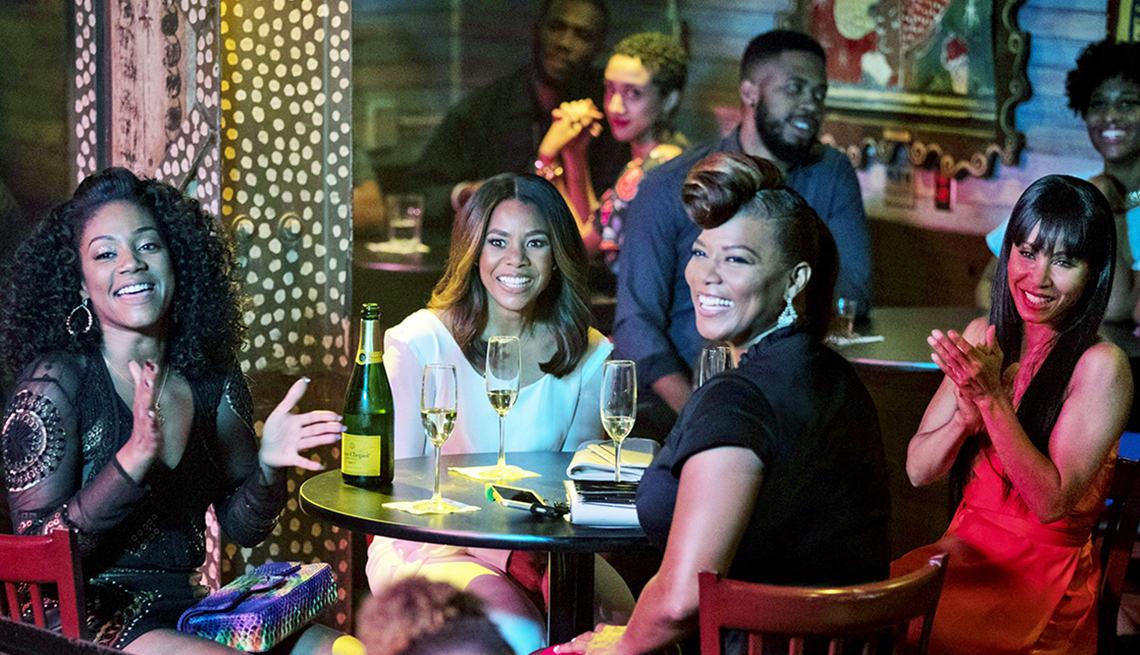 “You are my dear friends and guests,” Ryan tells them. “Act accordingly.” Of course, that’s not going to happen. Especially when they learn that Stewart has been cheating on Ryan.

Larenz Tate arrives on the scene as bass-playing college friend Julian, a brother as gently suave as he is honorable. Yes, there’s more than a bit of Tyler Perry-esque matchmaking going on.

That black women can do filthy fun and still deliver a neo-romantic (albeit predictable) lesson about love and friendship feels like an underachieving aim for such a fine ensemble.

Was it wrong to hope for smart raunch, for the kind of writing that hints at the carnal traditions of Moms Mabley, or better, Prince, so gifted at making eros come alive with sexual metaphors and similes? Instead the f-bombs fly in the first minutes. A running gag about the size of a suitor’s endowment starts to sag. A bit with Dina offering a lesson in the sexual practice of “grapefruiting” works too hard to become an insta-classic.

Still, Haddish's energy leaves a lasting impression. She makes Dina’s outrageousness infectious. Although in keeping with the movie’s humor, we may have to add infectious like a bad rash. The pleasures of Girls Trip aren’t quite worth it.