Christopher Nolan’s Dunkirk, a likely Oscar nominee for best picture, director, cinematography and score, may be the best World War II epic since Saving Private Ryan, but its emotional style is almost the opposite. Its you-are-there-about-to-die action is more relentless than Tom Hanks’ D-Day scenes — see it on IMAX — but instead of Steven Spielberg’s virtuoso heartstring-fiddling, character exposition and stirring dialogue, Nolan makes the soldiers austere, almost wordless, existential loners.

Only it was real. In May 1940, Hitler’s shockingly fast, amphetamine-fueled tank troops forced almost 400,000 Allied soldiers to France’s port of Dunkirk and its nearby beaches — too shallow for big ships, so they were trapped, tantalizingly in sight of Britain’s white cliffs 26 miles away. The tanks were forbidden to finish them off, so instead of winning WWII in nine days and avoiding America’s entry to the war, Hitler let the Brits get away, ferried home in part by an unlikely mosquito fleet of private citizens’ boats strafed by planes.

In Dunkirk, you scarcely see Nazis, just their bombs and bullets, but you feel what it’s like to be a statistically insignificant sitting duck. Nolan, in love with narrative tricks, breaks the escape into three intersecting acts. First, a young Brit (Fionn Whitehead) eludes snipers, grabs a dying guy on a stretcher and races past the troops on Dunkirk’s shot-up pier to a big getaway ship. He and his fellow soldiers (including One Direction's Harry Styles in an auspicious acting debut) are no heroes — the kids simply want to live. But evacuation does not come easy. Ships keep turning into spectacular death traps, and escaping swimmers glimpse hellish surface oil fires through swirling seawater. 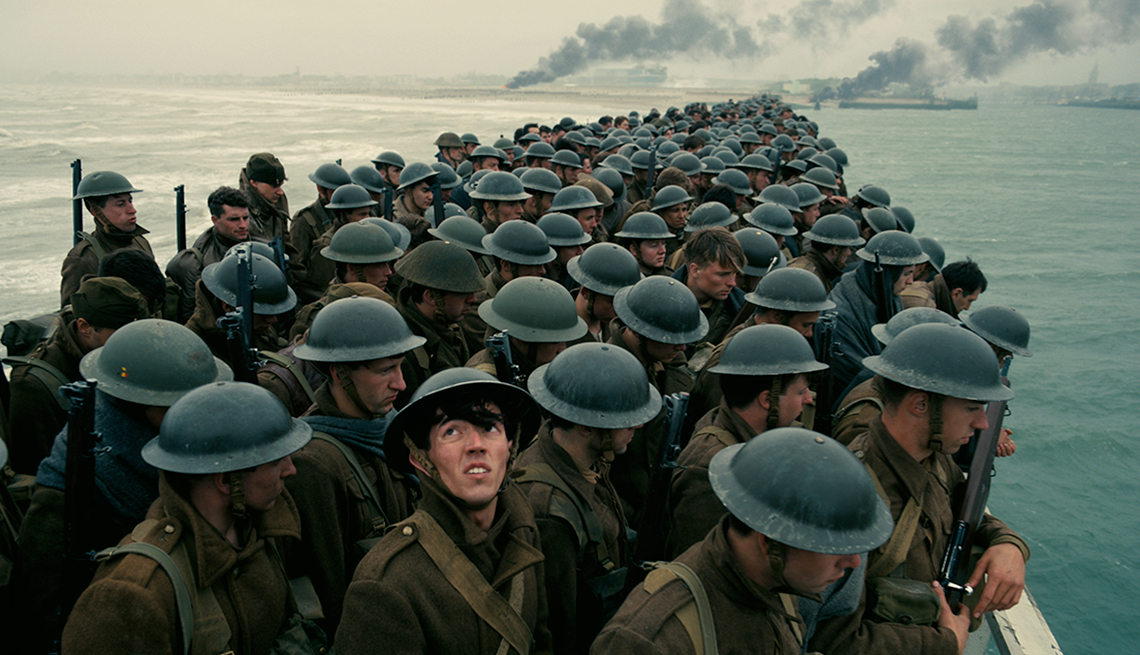 'Dunkirk' may turn out to be the most stunning movie of 2017.

Meanwhile, an instant navy of death-defying pleasure boaters leaves England to rescue Dunkirk’s stranded 400,000. As a civilian boat pilot, Mark Rylance offers a minimalist acting style ideal to capture the citizens’ stiff-upper-lipped resolve, and Cillian Murphy is convincing as a shell-shocked shipwreck survivor he picks up (the script calls him "Shivering Soldier"). Rising star Barry Keoghan plays a teenager who dies a hero’s death, but also a scarily random one.

In the third section, an aerial dogfight, Britain’s Spitfires take out inferior German Stukas, giving the boats below a slim chance. As a flying ace, Tom Hardy, his face largely obscured by his pilot’s mask, acts as brilliantly with his eyes alone as anybody has since Tom Hardy as Bane in The Dark Knight Rises, or maybe since Peter Weller in Robocop. Some of the film’s most indelible scenes are terrifying landings on water, or a bit when the engine goes silent and the pilot drifts skillfully toward his fate. Throughout Nolan’s visual masterpiece, composer Hans Zimmer’s soundtrack, based on a sinister ticking clock, ratchets up the tension and orchestrates the emotions Nolan’s script keeps tamped down and internal.

Even the triumphant finale is antiheroic — instead of hearing Churchill’s “We shall never surrender” speech in his stentorian oration, it’s read sotto voce by a soldier. This emotional abstemiousness may prevent an Oscar success on a par with Saving Private Ryan’s. Oscar likes overt emotion, like Sean Penn shouting, “Is that my daughter?” in Mystic River. Yet it makes the victory seem more hard-earned, rigorously unsentimental.

The film’s multipart structure is less satisfying than the narrative jigsaw puzzles that made Nolan famous (Memento, Inception). It’s hard to keep track of where the three stories and sets of characters intersect, partly because the characters are so minimal.

So maybe Dunkirk won’t get 11 Oscar nominations like Spielberg’s more teary war film. On the other hand, it’s clearly the most stunning movie of 2017, so maybe it will get 12. Either way, it's a victory.