(Video) The Nice Guys Movie Trailer: Russell Crowe and Ryan Gosling are not-so-nice but comical guys in this throwback to Lethal Weapon and 48 Hrs.

An unapologetically violent but breathtakingly funny buddy picture that leapfrogs back to the golden age of Lethal Weapon and 48 Hrs., The Nice Guys is that rare action-comedy film that earns its laughs the hard way: through characters whose predicaments arise not from a screenwriter's desperation but from their own engagingly quirky personalities.

Ryan Gosling stars as Holland March, a Los Angeles private detective who is haunted by the loss of his wife in a house fire — an echo of Mel Gibson's tormented widower in Lethal Weapon, a movie with which The Nice Guys happens to share a screenwriter (Shane Black, who also directs). Russell Crowe costars as Jackson Healy, a corpulent goon whose principal line of work appears to be beating poor saps to a pulp.

Our protagonists don't exactly "meet cute": Healy breaks March's arm as a manner of "persuading" him not to pursue a certain missing-person case. Events conspire to land both guys on the same side, of course, and soon they're squeezing witnesses and making enemies all across the city. Indeed, the pair draw so much gunfire you could track them by the trail of blood and charred car chassis they leave behind. Lurching from one comically violent set piece to another, they miraculously survive each one until March, in a moment of clarity, announces, "I don't think I can die!" 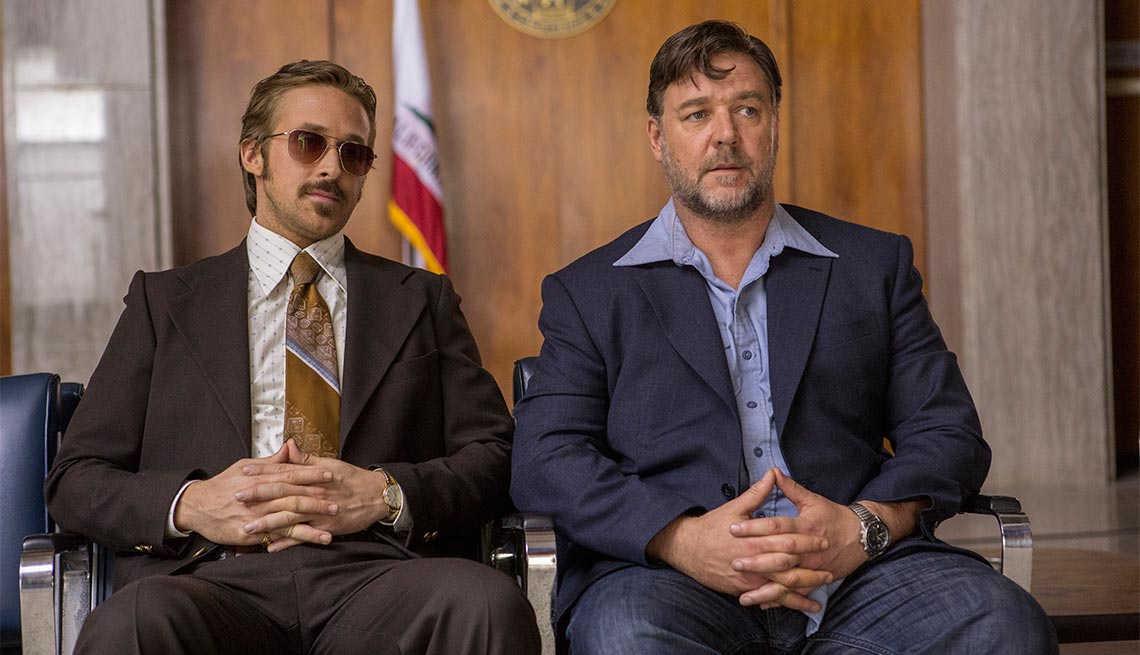 Russell Crowe and Ryan Gosling are "The Nice Guys."

The Nice Guys is set in 1977. Anyone who lived in L.A. at that time will recognize the city's smog-choked skyline, its snaking gas-station lines (with prices soaring above 60 cents a gallon), the emergent cocaine culture and the general unease that threatened to settle over the country like a smothering blanket. It was also the last gasp of Detroit's Big Car Era, and The Nice Guys gets some good mileage from that: The unfolding plot involves a catalytic-converter scandal. Not quite sexy, I grant you, but before long the storyline winds through the underworld of skin flicks, a no-holds-barred Hollywood party and an elusive young woman who seems less clad each time our heroes encounter her.

Gosling and Crowe are two fine actors, and they hit a comic stride that propels the improbable plot like a Mercury Marquis Brougham down the Pacific Coast Highway. Crowe is all deadpan business, even when inflicting hurt on an unfortunate target, but he brings a surprising dose of tenderness to his scenes with 13-year-old Angourie Rice, who plays Gosling's street-smart daughter, Holly. Gosling has been funny before (Crazy, Stupid, Love.), but here he mines a truly rich comic vein, even taking a moment to brilliantly channel, of all people, Lou Costello.

With one eye clearly set on a sequel or two, The Nice Guys teases us with glimpses of the pair's backstories. But writer-director Black never truly plumbs the depths of either character, blocking us from investing in them the way we bought into Mel Gibson's tragically suicidal — yet ingeniously hilarious — rogue cop.

Still, in an era when Hollywood's idea of a buddy comedy is to take two sitcom stars and slap them into a series of escalatingly stupid situations, The Nice Guys is a refreshing, class act. I'd say they don't make them like this anymore, but they just did.