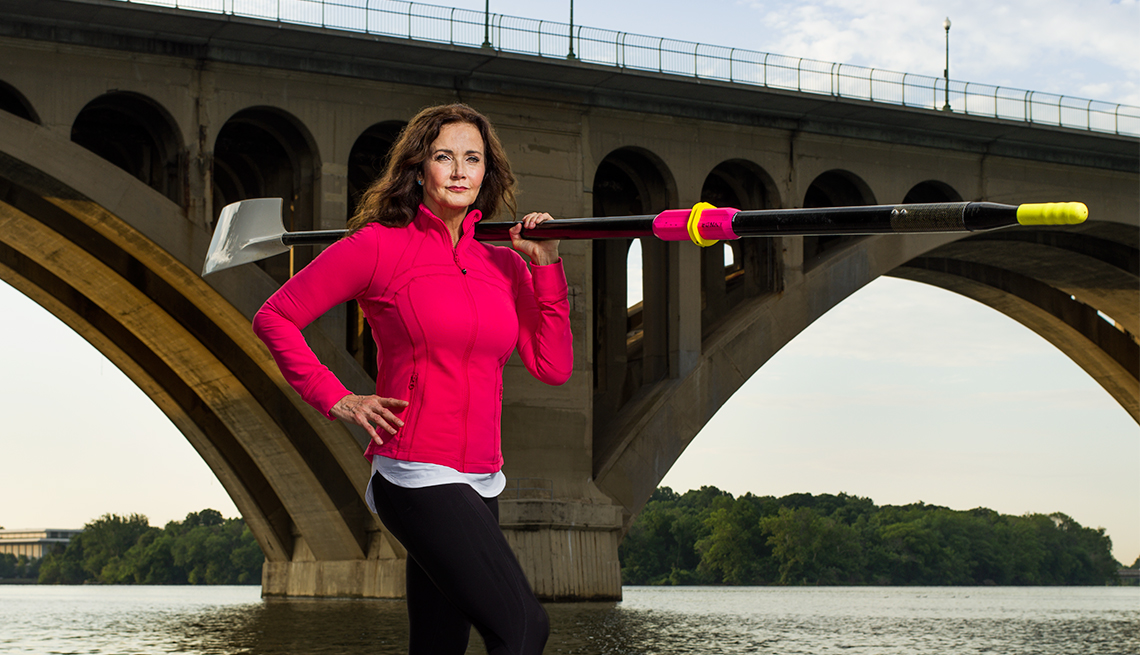 Lynda Carter wears her celebrity lightly, laughing with fellow rowers about the curlers still in her hair when she arrives for a 6 a.m. photo shoot at the historic Potomac Boat Club in northwest Washington, D.C.

Her role as a mighty Amazon in the original Wonder Woman TV series (1975-79) required Carter to do a good deal of running and physical stunts for the camera. Now, as daybreak lights the cathedral arches of Key Bridge just downstream, the fit 65-year-old carries a one-woman racing shell across the wood-plank dock and grapples it into position on the water. Carter is about to undertake a workout she's been trying to perfect since she fell in love with sculling (two oars) eight years ago.

"A girlfriend of mine suggested I would like it," Carter recalls, "but I was skeptical at first. Then one day I happened to cycle past a couple of boat clubs and thought, 'You know, I'm going to see if I can learn to scull.' So I started taking lessons — and loved it from the start. Sculling is easy to learn, but tough to master. Anyone can get in a boat and paddle around, but to get anywhere requires extreme balance."

Here, Carter expands on the notion of finding balance — on the water, on stage, in life overall:

It's a sport convenient to anyone who lives in the Washington, D.C., area, because you've got the river right there. You can scull anyplace that's got a smooth enough waterway. It's a wonderful sport: You get amazing exercise, and it's always quiet and beautiful.

Were you trepidatious about learning it?

Why would I be? It does take a certain skill level, because the boat is very tippy. You've got these unwieldy, 15-foot-span oars, and you're throwing them around in an itty-bitty, long, skinny boat. The worst thing that can happen is you tip over and have to climb back in.

Has that ever happened to you?

Many times. When you catch an oar in the water, it's like catching a ski tip in the snow; over you go.

Is daily ritual part of the sport's appeal?

That, and solitude. I used to go out in the late morning three or four times a week. I'd drive in after the traffic had let up from the morning commute, go park and grab the boat, and do 20 minutes out and back — about a 40-minute row. Oftentimes I would take a little iPod and headphones with me in a waterproof pack and play my music on the river.

Any special kind of music you like to listen to?

Well, I'm often working on new music for my show: Since about 2008, I've done a little mini-tour in both the spring and the fall, and I also do the Kennedy Center and Lincoln Center every year. So I'm not belting out original compositions — I'm just trying to play around with things and get the words into my bones.

I understand you made a disturbing discovery on the river when you first started out.

One afternoon I was almost completely alone on the river; unbeknownst to me, they had closed the boathouse because a storm was coming. There was a lot of flotsam coming down the river — logs and that sort of thing — so I was being rather careful about not running into something, when I discovered this person in the water. It was a very slight person in jeans, with a parka over their head and a backpack, and initially I thought it was a young boy. But it turned out to be a woman who had committed suicide.

People say how awful that must have been, but when I found out what the story was, I didn't really feel that way because I'd been able to give her family some closure. Had I not discovered her, they never would have known what had happened.

Barring any traumatic discoveries, how do you feel at the end of a good row?

When the river is completely flat and there's no wind, you can really get into a rhythm. I've had brief moments — no more than five minutes — where I got that sense of "one with the water," or whatever. It happens only when your strokes are so smooth that rowing feels like meditation.

But in general I'm not trying to prove anything. I'm just enjoying being out on the river, thinking about the history of the region or looking at the beautiful water and spotting blue herons. And I'm really enjoying the challenge of learning a new sport.

Allan Fallow is a features editor for AARP Integrated Media.