(Video) 'Vacation' Movie Trailer: Rusty Griswold takes his own family on a road trip to "Walley World" in order to spice things up with his wife and reconnect with his sons.

You run a risk when you try to re-create a favorite vacation: The drive may seem longer, the sights less diverting, the destination stripped of its long-ago wonder.

All of those perils undermine Vacation, a comedy that retraces the highway so memorably navigated 32 years ago by Chevy Chase, Beverly D'Angelo and their oddball relations in National Lampoon's Vacation. John Hughes' original screenplay (based on a short story he wrote for National Lampoon magazine) tapped into a shared primordial experience — the family road trip — and draped upon it hilariously wild exaggerations of every common mishap: weird relatives, unfriendly locals, underbudgeted expenses, cramped quarters, cheap motels … and getting lost time after time after time. 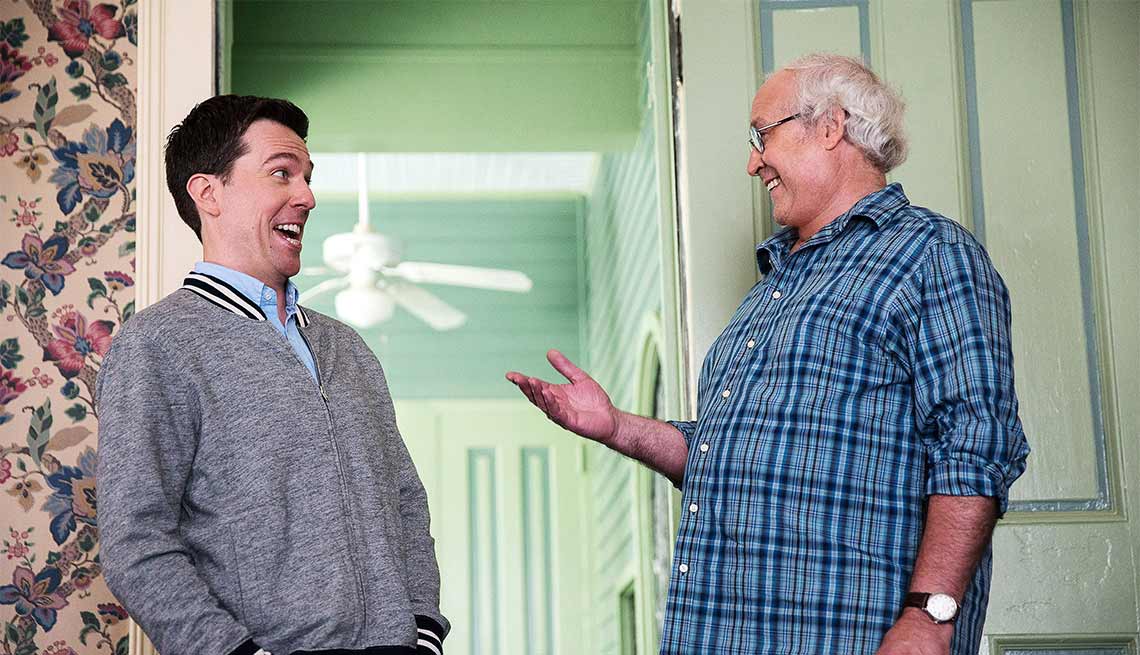 The original Vacation also benefited from two stars at the height of their powers. Chase's Clark Griswold was congenitally clumsy and socially awkward; D'Angelo's Ellen packed a powerful combination of sexiness and laugh-out-loud funniness. In this update, Clark and Ellen's son, Rusty (Ed Helms), decides to treat his brood to a reprise of the Griswold family's cross-country trek to Walley World — a fanciful blend of Disneyland and Six Flags that, as we all recall, was closed the last time the family pulled into the parking lot.

Helms is fine as Rusty, occasionally displaying quirks and phrasing that a son of Clark might well have inherited. As his wife, Debbie, Christina Applegate engages in the sort of physical comedy that would have been assigned to Chase in an earlier day.

Skyler Gisondo, as the couple's endearing older son, James, adopts a perpetually pained expression, sweetly portraying that "I think I'm in the wrong family" vibe common to adolescents. The problems arise with the younger son, Kevin, played by Steele Stebbins. As a sign of the times, perhaps, the writers have decided that the more dirty words you stuff in a child's mouth, the funnier he becomes. So we have this little kid — all of 8 years old, maybe? — dropping f-bombs all over the landscape and terrorizing his good-natured older brother. (A plastic-bag-over-the-head gag is deemed so hilarious that it's repeated at least twice). Even before the family leaves Chicago, the audience longs for them to visit a bar-soap factory and feed Junior a few samples.

Vacation riffs on many of the original's themes, with mixed results. Clark's beloved Family Truckster station wagon (which, along with Chase and D'Angelo, makes a cameo appearance) is replaced by a visually hilarious European import with a button-jammed key fob the size of an iPad. A gag that evokes Clark's long-ago encounter with a sports car-driving Christie Brinkley, on the other hand, got a much better send-up in 1997's Vegas Vacation. And as in the original and its three sequels, it's always grand to hear Lindsey Buckingham's fantastic Vacation theme song over the big theater speakers.

Vacation is funniest when it departs from the original. A nighttime scene at the Four Corners Monument — where cops from Arizona, Colorado, New Mexico and Utah end up pulling guns on one another while hurling jingoistic insults — is funny not only as part of the film's narrative, but also for smartly poking fun at the political divides of 2015 America.

Similarly, the family's disastrous river-rafting trip with an emotionally damaged guide (Charlie Day from TV's It's Always Sunny in Philadelphia) touches on modern-day adventure travelers' penchant for entrusting their lives to complete strangers.

Now indulge me while I play the "you kids get offa my lawn!" card. Do you remember being scandalized by Brian De Palma's Scarface in 1983, where virtually every other word from Al Pacino's mouth was the f-bomb? Movie reviewers went back and counted them — there were 231, if you're interested — but they spewed forth from a guy who chain-sawed a victim chained to a shower head, so his language was far from his least endearing quality.

Now, even in fluffy comedies like Vacation, this Mother of All Profanities blossoms like daisies on a dunghill. Young Stebbins may not endanger Pacino's record, but he lets the word fly dozens of times.

By contrast, the original Vacation (made the same year as Scarface, interestingly) was built on a deliciously long, slow burn. Clark doesn't blow a fuse when he's tricked into buying the Family Truckster … or when the sleazy garage guys at Monument Valley take all his money … or when he has to mount a dead Aunt Edna on the car roof. Not until near the end, when a Phoenix downpour prompts his family to meekly suggest they turn around and go home, does Clark explode: "I think you're all f---ed in the head!" It was, and may remain, the most perfect use of the f-bomb in movie history.

You can't improve on perfection. For proof of that, just buy a ticket to Vacation's 32-year remake.