(Video) 'The Intern' Movie Trailer: 70-year-old widower Ben Whittaker has discovered that retirement isn't all it's cracked up to be. Seizing an opportunity to get back in the game, he becomes a senior intern at an online fashion site, founded and run by Jules Ostin.

Those of us who were never cool young guys live with an enduring hope: that someday we'll be cool old guys.

It's a fantasy embodied in the flesh — specifically, in the gloriously creased, proudly aging flesh of 72-year-old Robert De Niro — in the new Nancy Meyers comedy, The Intern.

De Niro stars as Ben, a retired, widowed phone book company executive — yes, a man whose entire career was dedicated to producing something that's now as antiquated as a buggy whip. Desperate to stay busy, he signs up for a "senior internship" position with a thriving Brooklyn online fashion company run by Jules — a hard-driving young executive played to perfection by Anne Hathaway (she of the biggest eyes since Bambi).

If feel-good movies are about wish fulfillment, then The Intern is a 50-plus worker's four-leaf clover, genie's lamp and rabbit's foot rolled into one. Almost immediately upon his arrival in the dot-com company's world of T-shirted, latte-swilling, skinny-jeaned millennials, Ben — resplendent in his suit and tie, proudly gripping his vintage briefcase — becomes a workplace icon. He sees sales patterns the kids miss. He advises his young male coworkers on how to impress a woman. He demonstrates the proper use of a handkerchief. Crucially, Ben also becomes the trusted confidant of company founder Jules, who's overwhelmed trying to balance her booming business, her neglected hubby (Anders Holm) and her adorable daughter (JoJo Kushner, so cute she must be computer-generated). 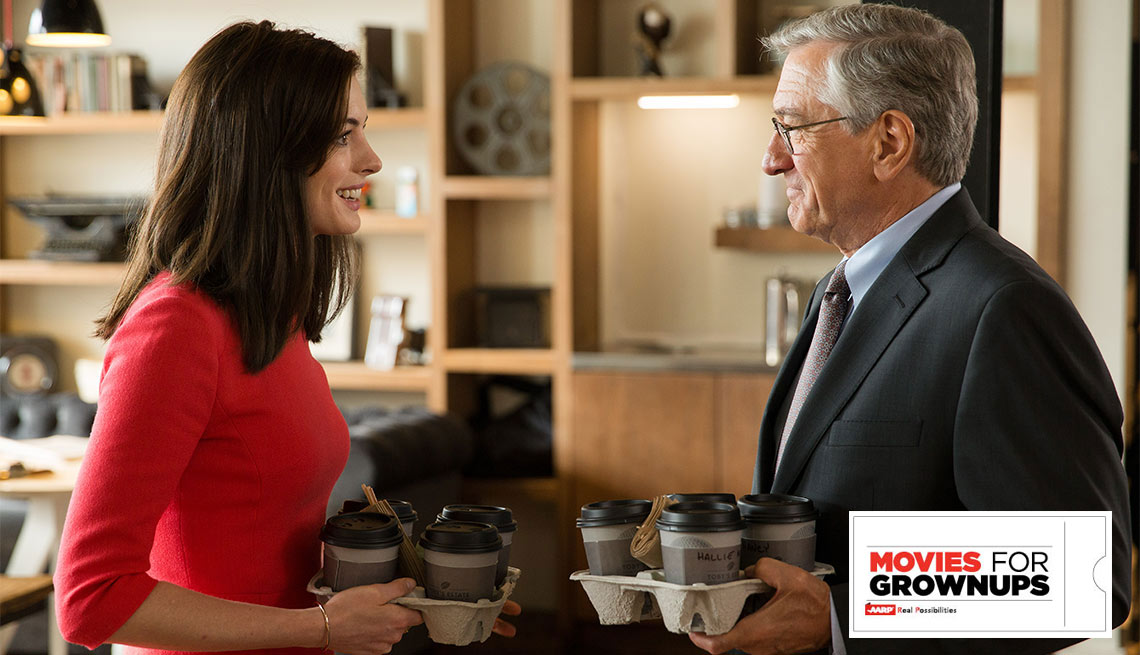 At the moment Ben arrives on the scene, the company's investors are pressuring Jules to hire a CEO, who would essentially become her boss. Drawing upon his reserves of experience and horse sense — products of his long years in a corporate environment — Ben becomes precisely the trusted adviser Jules needs.

A lesser movie might have gone the cheap route and engineered some ridiculous May-September romance between these two, but sure-handed writer-director Meyers doesn't distract us with unlikely twists. Jules is married — how happily is a matter of debate — and Ben, though still mourning the death of his wife, quickly strikes up a low-burn relationship with the company's staff masseuse(!), played by a radiant if underutilized Rene Russo.

The Intern has a lot on its plate. The film tackles ageism and sexism in the workplace; intergenerational relationships; marital pressures; dating at 50-plus; corporate chicanery; and the infuriating way technology simultaneously links and divides us. (Jules frequently speaks by cellphone with her mother, voiced by Mary Kay Place, using that very phone to keep her mom at arm's length.)

Somehow, though, the viewer never feels overstuffed. The issues flow one to another and frequently overlap, just as they do in real life. There are a few comically manic scenes, but for the most part The Intern's characters are not averse to stopping in their tracks and talking things out. You'll find not one villain in the film; the people who cause each other pain seem to do so without premeditation, and they all come around at the end to apologize for their thoughtlessness. If it's a slightly unrealistic view of the way we humans tend to resolve our differences, it's also a terrifically appealing one — and a lesson that movies all too seldom relay.

One such scene, understated as it is, stands as the film's most memorable set piece: a long, soul-baring session between Jules and Ben in a hotel bed (the sweet, innocent way Meyers gets these two to share a mattress is a wonder to behold). In the quiet of the night they divulge their secrets, their regrets, their hopes. The moment feels so authentic it's almost embarrassing to listen in.

At the end of their talk, as Jules drifts off to sleep, Ben watches misty-eyed as the TV plays that wonderful scene from Singin' in the Rain where Gene Kelly sings "You Were Meant for Me" to a glowing Debbie Reynolds. Tears well up in Ben's eyes as the music swells. He's sad. And he's happy. He's conflicted. And he's determined.

In that moment, we understand that life doesn't always compartmentalize itself. Neither does a fine movie.