(Video) 'Terminator: Genisys' Movie Trailer: John Connor sends Kyle Reese back in time to protect Sarah Connor, but when he arrives in 1984, nothing is as he expected it to be.

Remember when the words "The End" appeared at a film's conclusion? The theme music would swell to one last flourish, then the final credits would roll.

In the Era of the Perpetual Sequel, that rarely seems to happen. So long as there's money to be made recycling old material, few cinematic stories ever manage to end. Instead, moviegoers have become conditioned to expect a bonus scene to appear before the theater lights come back up, often previewing the next installment. 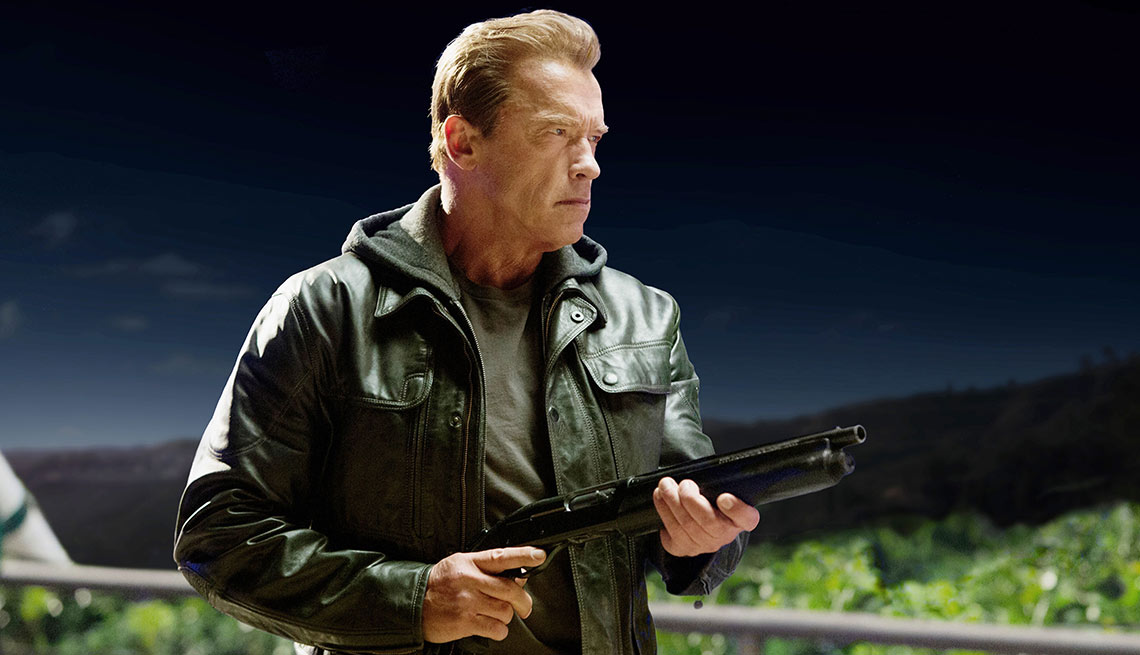 No surprise, then, to encounter this fifth go-round of the Terminator series, which began in 1984. Incarnation No. 4, 2009's underwhelming Terminator Salvation, was notable primarily for its widely circulated recording of star Christian Bale verbally assaulting his director of photography on the set.

But chapter No. 5, Terminator Genisys — which annoyingly rewrites much of this apocalyptic saga of cyborg assassins built to annihilate the human race — offers an unassailable reason to sit through essentially the same plot as the original: 67-year-old Arnold Schwarzenegger's senior-citizen reprise of his iconic robotic character, which he hasn't inhabited since 2003's regrettable and forgettable Terminator 3: Rise of the Machines.

Yes, Ahnuld is back — again. He even says "I'll be back" once more, just in case you hadn't noticed. His out-of-date T-800 model is showing its age, but as Schwarzenegger intones in his latest Austrian-inflected catchphrase, "I'm old, not obsolete." And after being a villain in the first outing, then a good guy after that, this time around the Governator is also the main source of comic relief. (Just wait till you catch the stiff lug try to crack a toothy grin.)

What should be obsolete by now, but alas is not, is the premise of the movie itself, in which time-travel technology — always an essential part of the story — is too often used as a crutch to explain away the inconsistencies and altered pasts of the characters. This no-more-than-serviceable retelling starts off in 2029, with John Connor (Jason Clarke of Dawn of the Planet of the Apes) on the verge of vanquishing Skynet, the oppressors producing the synthetic superbeings. John sends Sgt. Kyle Reese (Jai Courtney) back to 1984 to ensure that his mother, Sarah Connor (Emilia Clarke of Game of Thrones — a thin substitute for soulful Linda Hamilton, who created the role), is not killed before he can be born.

Most of us know that Reese is John's eventual father. But Reese is not yet in on the joke, so there's plenty of sexual tension to the bickering between him and Sarah as they time-travel back to San Francisco, in the year 2017, to stop Skynet from launching its extermination of mankind.

Various elements from the older entries have been revived here, including the T-1000 from 1991's Terminator 2: Judgment Day, who once again oozes mercury when shot but then instantly heals. But what was cutting-edge cool 25 years ago seems ho-hum today — these skeletal creatures in human guise are rarely in danger of actually expiring. (It's likewise time to retire the repetitive fiery explosions.) Finally, do we really need to watch the Golden Gate Bridge crumble into the bay so soon after San Andreas did the job?

Lost in all the mayhem is how we used to care about the characters as much as we did the action. The cast does its time-shifting best, but they are constantly hamstrung by the need to deliver long-winded expositions. Even the script addresses that problem: When a grizzled cop (recent Oscar winner J.K. Simmons) asks Sarah about the confusing nature of their mission, she cuts to the chase: "We're here to stop the end of the world." His reply: "I'm OK with that."

We would be, too, if only the end justified the less-than-satisfying means to get there.

Susan Wloszczyna is a former USA Today film writer and a contributor to RogerEbert.com and Indiewire.com.