(Video) 'Ricki and The Flash' Movie Trailer: A musician who gave up everything for her dream of rock-and-roll stardom returns home, looking to make things right with her family.

Ricki and the Flash is a movie about commitment. It's also wrapped up in a lot of great music, with Meryl Streep and Rick Springfield fronting a rockin' band that covers Bruce Springsteen, Tom Petty and other artists aimed squarely at an older moviegoing audience. But at the center of the redemptive dramedy is the idea of committing to one's passion at the expense of those to whom you've committed a life.

At the risk of making this feel-good movie sound more serious than it actually is, let's consider the premise: Aging rhythm guitarist Ricki Rendazzo (Streep, who learned to play guitar for the film) had dreams of being a female Mick Jagger but has ended up leading the house band at a San Fernando Valley bar while working days as a cashier at a high-end grocery store.

To pursue her dream, Ricki long ago left her very successful husband, Pete (Meryl's still-adorable Sophie's Choice costar Kevin Kline), back in Indiana with their three children, all of whom harbor various degrees of resentment about her leaving. They've been well cared for by Pete and his beautiful second wife, Maureen (Audra McDonald) — their gated mansion alone is drool-worthy (and juxtaposed with Ricki's dingy boho apartment in Cali, one wonders if Meryl's Ricki ever questions that choice). But then comes a crisis that Pete feels requires Ricki's presence: Daughter Julie and her cheating husband are getting a divorce, and Julie (played by Streep's real-life look-alike daughter Mamie Gummer) has gone off the deep end. To prove it, she greets her mother with more venom than a passel of rattlesnakes. 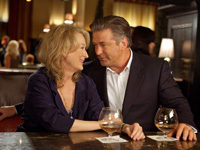 Meryl Streep and Her Men!

We'll put aside the question of why Dad thinks a mom who is not even on the guest list for the upcoming nuptials of their son (a side development and another nod to commitments) should swoop in to save a daughter who hates her. Perhaps we are to believe that sometimes father does know best. Or scriptwriters do. Soon real-mom and daughter are off getting mani-pedis and haircuts and having a lot of laughs — until stepmom Maureen returns from her own family commitment: an ill parent who (convenient for the plot) drew her away from home just as the big daughter divorce drama went down.

Lots of awkwardness ensues before Ricki hightails it back to SoCal, but not before "Mo," as the family affectionately calls stepmom, makes the point that she has been there for her kids — she does consider them hers — and she has filled a hole that was left when Ricki split. Ouch.

Meanwhile, Ricki realizes that bandmate/beau Greg (Rick Springfield) — who has been trying to get her to commit to him — is indeed good for her. As a couple, Streep and Springfield don't get as much screen time as she does with the family, but they fit together well in the way that many couples who have spent the best years of their lives together do. There may not be sizzling chemistry, but their love isn't about that. It's about support, having each other's back, and comfortable attraction.

Diablo Cody, who won an Oscar for writing Juno, is a talented screenwriter who unfortunately here puts her characters in too many clichéd situations from which director Jonathan Demme doesn't extricate them. The result is a movie that feels flat, less substantive than it could have or should have been.

One wonders what Nancy Meyers, who directed Streep's brilliant It's Complicated, or the late Nora Ephron, who was a master of the domestic dramedy, might have done with the insanely talented cast that Demme has assembled. Luckily, that cast makes the most of what it's got and turns 'Ricki and the Flash' into a movie worth the price of admission.