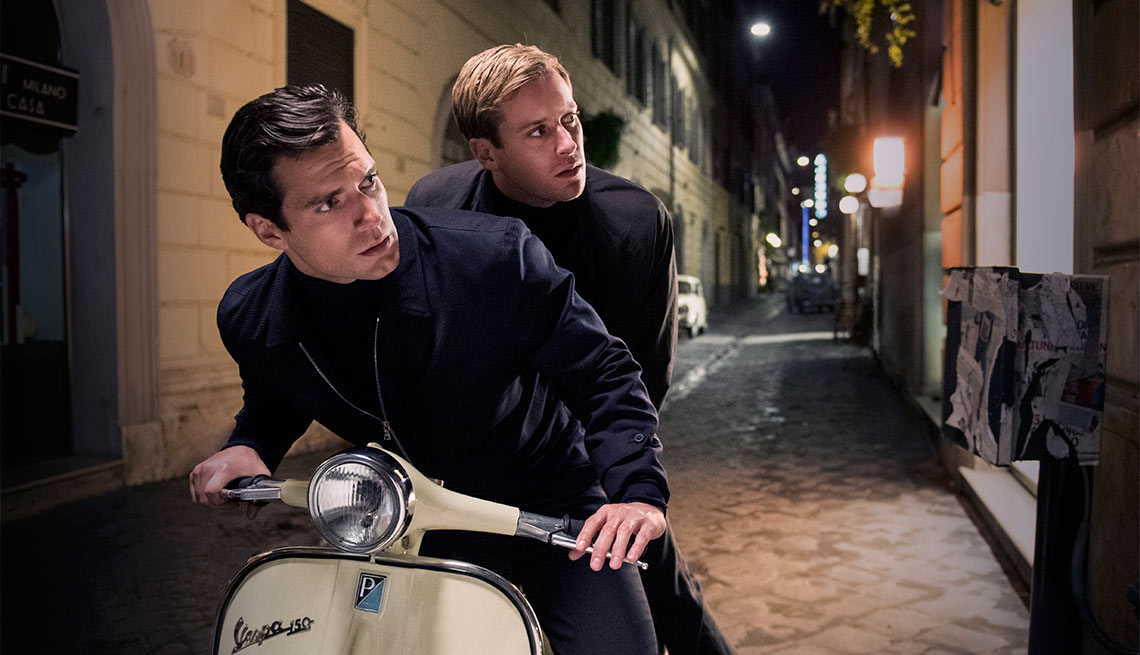 Sixties kids like me — who were too young to buy tickets for the James Bond films and were desperate to know what we were missing — got our spy fix every week by following the exploits of Napoleon Solo and Illya Kuryakin on TV's The Man From U.N.C.L.E. It was our glimpse into the grownup world of quipping killers, sexy sirens and over-the-top villains — and we loved it.

I'm happy to report there's lots to love in the new U.N.C.L.E. big-screen reboot. Thank goodness, director Guy Ritchie is apparently as fond of the old show as we were.

More than a few of us had our daggers out for Ritchie's long-awaited version of the series. From the trailers, it looked like he was messing with the original's mythology: For starters, unlike in the series, Solo and Kuryakin don't work for an international black ops group called the United Network Command for Law and Enforcement, but for the CIA and KGB, respectively.

But the film preserves a jaunty '60s vibe, from its bold colors to its trumpety music. (For the scenes set in Italy, composer Daniel Pemberton has created a blaring soundtrack that recalls the excesses of Sergio Leone's favorite music man, Ennio Morricone). The action is strictly of a 1960s pre-Peckinpah brand: bloodless shootouts, no profanity and, whenever possible, heroes who stop short of actually killing anybody. Even the film's obligatory torture scene is played with a deft, light hand.

That's not to say The Man From U.N.C.L.E. is a spy spoof any more than was the original show. All involved throw themselves with impressive resolve into a very Cold War-centric story about a terrorist group trying to build an atomic bomb. As in the series, there's a goofy urgency that drives the film forward. The action sequences are thrilling, but they take place in a universe where the hero can bounce back from a near-death experience to straighten his tie and toss off a perfectly timed quip before rejoining the chase.

As Solo, Henry Cavill (Man of Steel, The Tudors) unleashes his inner George Hamilton, looking dashing in his tailored suits and barely mussing his hair even in a high-speed dune buggy chase. His ludicrous one-liners seemed ominously forced in the film's trailers, but given air to breathe in the context of the film, they come off as smooth as a silk Sette tie. As Russian-born Kuryakin, Armie Hammer (J. Edgar, The Lone Ranger) has the relatively thankless task of playing Solo's straight man. But he has his moments as a trained killer with a hair-trigger temper who's trying to keep his cool undercover. He also comes closest to getting the girl, Gaby (comely Alicia Vikander, who played the sexy robot in Ex Machina).

Hugh Grant pops up as Waverly, the guy who, in the telegraphed sequel, will serve as the team's boss. Of course Grant, handsome as ever, would require jowl transplants from now until doomsday to attain the hangdog look of the immortal Leo G. Carroll, who played the part on TV. Grant is a welcome sight in the part, yet one can't help but imagine Grant catching a sidelong glimpse of Cavill, all teeth and dimples, and wistfully thinking, "Why couldn't we have made this film 20 years ago?"

007 creator Ian Fleming was involved in the development of The Man From U.N.C.L.E. back in the '60s, even giving Napoleon Solo his snappy name. Indeed, Solo and Kuryakin can be seen as two halves of James Bond's personality: Solo the ever-cool smart aleck, Kuryakin the steely-eyed killer.

There's also a very early-Bond-like innocence at work here — a lot of Sean Connery's Dr. No and virtually none of Daniel Craig's Casino Royale — that further illustrates The Man From U.N.C.L.E.'s unabashed affection for the time period of its source material. Ritchie and company have not taken 2015 sensibilities and layered them on a 1963 setting: In concept and execution, The Man From U.N.C.L.E. endeavors, and largely succeeds, in recapturing the world, with all its mysterious threats and misplaced hopes, as it was seen through the Hollywood action lens at mid-century.

(Video) 'The Man from U.N.C.L.E' Movie Trailer: In the early 1960s, CIA agent Napoleon Solo and KGB operative Illya Kuryakin participate in a joint mission against a mysterious criminal organization, which is working to proliferate nuclear weapons.