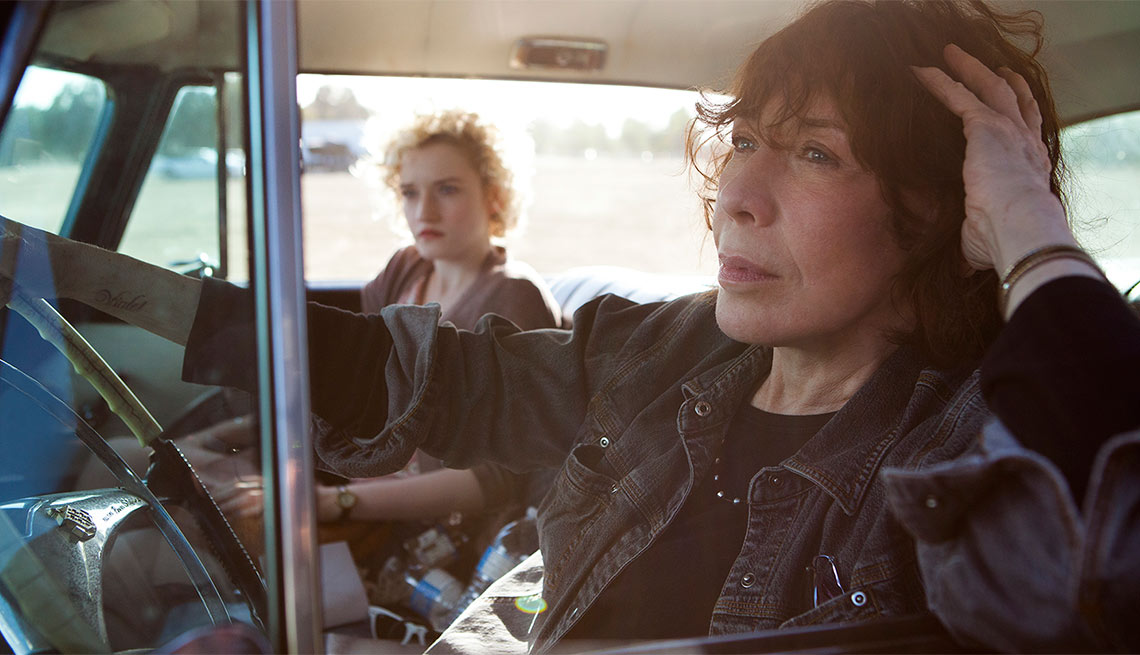 Lily Tomlin plays a grandmother who helps her granddaughter, Sage (Julia Garner) pay for an abortion.

Grandma is a comedy about a cantankerous grandmother (Lily Tomlin) helping her teenage granddaughter (Julia Garner) pull together enough money for an abortion.

If the world can be divided into two types of people, those in the first camp will say, "I can't wait to see that!"

Those in the second will say, "Ick!"

And that's perfectly OK with the stars of Grandma and the film's writer-director, Paul Weitz. They aim their considerable talents squarely at those in Camp No. 1, ignoring anyone who might find the entire exercise a bit distasteful.

Tomlin, who has appeared regularly in movies over the last decade without being called upon to act in a single one, gives a career-capping performance as Elle, a retired college professor and long-inactive poet who recently lost her soul mate of 38 years, a woman named Violet. Elle is angry at the world: A self-described misanthrope, she's first seen cruelly dismissing her latest lover, dewy-eyed Judy Greer, as a mere "footnote" in her life. Tomlin's triumph is in conveying Elle's underlying brokenness, her crippling vulnerability, even as she mouths off to innocent bystanders and takes a hockey stick to the callous boyfriend who impregnated her granddaughter.

Elle springs into action when the girl, Sage, comes to her for help. Sage is broke and her boyfriend won't help pay for the procedure, but she can't bring herself to confide in her high-powered lawyer mother (Marcia Gay Harden). Elle doesn't have the cash, however — and Sage's clinic appointment is that afternoon. So they hop into Elle's 1955 Dodge Royal (Tomlin's own car, making its big-screen debut), and together they start hitting up folks who might help subsidize the $600 operation.

But the randy boyfriend is useless, and a transgender tattoo artist who owes Elle money (Laverne Cox) can offer only moral support (and some free inkwork). It all leads to an inevitable showdown with Sage's mom, who is estranged from Elle and on only slightly better terms with her own daughter.

There are precisely three men of any consequence in Grandma: the useless boyfriend (Nat Wolff), an angry clerk (John Cho of the Harold & Kumar movies) who ejects Elle and Sage from his coffee shop because he can't abide their abortion talk, and Elle's long-ago flame from her confused-sexual-identity days, played with calm effectiveness by Sam Elliott.

The first is a rat.

The second is a lout.

The third starts out sympathetic, only to emerge as a manipulative heel who uses the power of his masculinity and economic superiority to slap the two women down.

Throw in the male taxi driver who abandons Elle on a dark street and a briefly seen dad trading "Shut ups!" with his young son, and it's clear the world of Grandma would be better off if men simply disappeared overnight, leaving the planet safe for lesbian moms, their well-adjusted daughters and their appreciative granddaughters. (Indeed, Sage's mother becomes a sympathetic character only after she abandons her alpha-male office behavior and rediscovers her nurturing side.)

Though I'm tempted to call Weitz's script a pro-choice screed, Grandma refrains from making light of the abortion issue itself. And the film strives further for balance when Elle cautions Sage that her decision is one "you'll think about every day for the rest of your life."

That line — delivered with a perfect, matter-of-fact sigh by Tomlin — is just one touching moment in a performance that makes Grandma a poignant and often funny road trip, so long as you don't find yourself at odds with the film's final destination.