The perfect marriage of source material, director and star, American Sniper barrels along like a Humvee across the desert, hits its targets with deadly accuracy and explodes with unexpected emotional force.

Director Clint Eastwood has always excelled at thoughtful war movies (Letters From Iwo Jima) and searing human dramas (Mystic River). Here he immerses us in both: the true story of Chris Kyle (Bradley Cooper), the most lethal sniper in U.S. military history.

Bradley Cooper is a revelation as he explores unknown acting territory in "American Sniper."

Kyle served four tours of duty in the Middle East, spending much of his time perched on rooftops, picking off shooters and bombers who threatened Allied troops patrolling the streets below. The job entailed endless hours of inactivity — and countless false alarms — punctuated by moments of unbearable suspense.

American Sniper has its share of explosions and mind-numbing firefights, but its most powerful scenes involve Kyle's peering through his gunsight at potential human targets below, trying to assess the degree of threat they posed. Early on we see just how high those stakes could be: He feverishly tries to discern whether a young boy might be carrying a grenade toward an approaching U.S. unit.

As Kyle, Cooper is a revelation. He has always been comfortable moving between drama (Silver Linings Playbook) and comedy (The Hangover), but here he explores unknown territory, portraying the inner life of a guy whose survival hinges on his ability to stuff his emotions into a psychological black hole. Cooper does it with his eyes — which Eastwood often magnifies through the scope of a high-powered rifle. As Kyle gazes on his wife (Sienna Miller) and growing family during his infrequent visits home, it's easy to detect the roiling sadness in Cooper's eyes. This is where his heart should be, Kyle knows, and he desperately wishes it were. But his real home, he must admit to himself, is on those rooftops in Afghanistan. 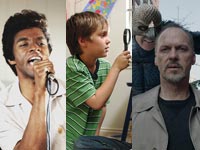 American Sniper is one of the best movies of the year. Here are the rest of the best!

Indeed, faraway places are where Kyle seems most comfortable relating to his wife. Through the modern miracle of satellite phones, we watch him chat casually with her from the field, forging an emotional bond he never seems capable of at home. That leads to one of the film's fiercest scenes, when a call home is interrupted by an ambush that nearly kills Kyle — with his screaming wife as earwitness.

Miller is exactly the woman a man would want to come home to — were he not addicted to the rush of war, that is. Warm, supportive and endlessly patient, she is an irresistible force for the audience. We silently whisper in the dark to Kyle, "Go home to your wife, you idiot!"

Kyle’s name should be somewhat familiar to audiences, but I didn't realize who he was until the film reached its breathtaking end. As the final chapter unfolded, I found myself shaking my head with mounting dread. “Is he that guy?” I asked myself out loud. Yes, he is.

Whether you know the ending or not, American Sniper surprises you by being a war film that shoots for the heart, not the adrenal gland. Its aim is deadly true.