Certain filmmakers have a style that's unmistakable within the first 10 minutes: You've got your Kubrick, your Hitchcock, your De Palma. To that list (if you haven't already) you can add Wes Anderson, whose exquisitely framed interiors, lovingly photographed faces and deadpan hilarity have been imprinted, mother-duck style, onto the psyches of his fans.

Though Anderson's signature style emerged in his early masterpiece, Rushmore (1998), in The Grand Budapest Hotel he employs his bag of tricks to create the most fully realized, emotionally engaging film of his career. For anyone who has long suspected Wes Anderson of being a master technician in search of his heart, The Grand Budapest Hotel joyfully announces that the quest is over. 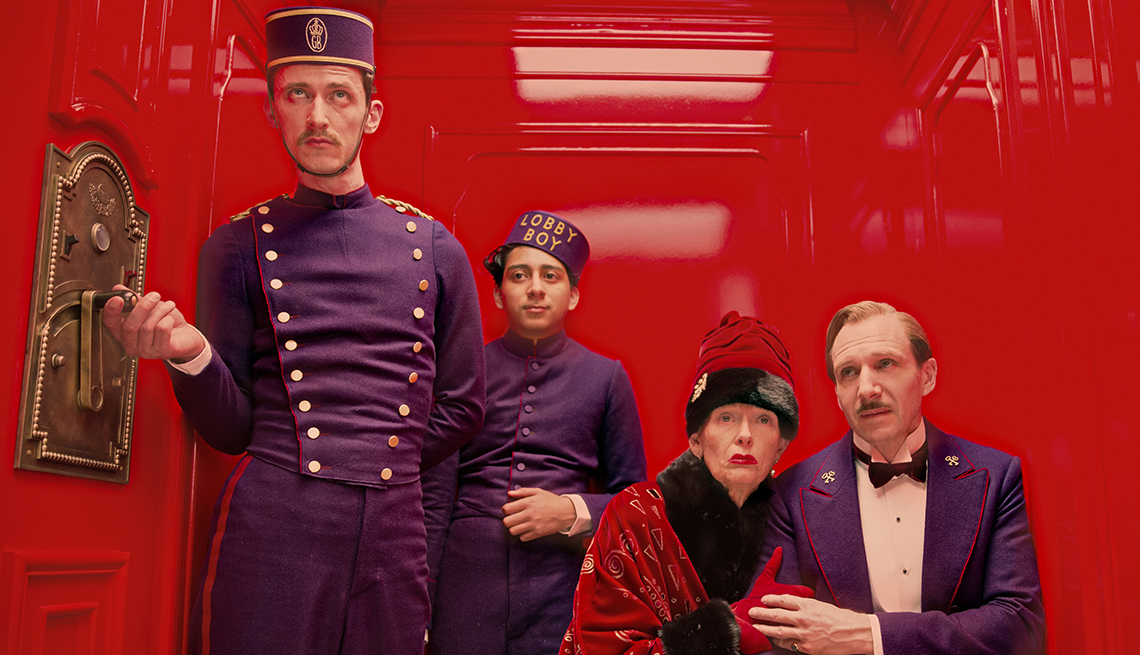 Love is in the air in the "best Wes Anderson film ever": Check into "The Grand Budapest Hotel."

The titular hotel is an elegant mountain resort in the fictional mid-European nation of Zubrowka. We arrive during that awful pause between the two world wars, when Europe lived in giddy denial, believing the peace could last. The cream of that dysfunctional society streams to the Grand Budapest, whose ever-accommodating concierge, M. Gustave (Ralph Fiennes), caters to their every whim.

Indeed, Gustave becomes as legendary as the hotel itself — so much so that a deceased patron, a spectacularly unattractive matron named Madame D. (Tilda Swinton, unrecognizable), bequeaths to Gustave her most valuable possession: a creepy Renaissance painting titled "Boy With Apple." That sets off a mad rush of events involving jealous family members, the local police and some thrilling chase scenes. The story finally wraps up, perhaps a bit too abruptly — and seemingly from exhaustion.

Part of Budapest Hotel's great appeal lies in its dual citizenship: The world Anderson has created is hyper-real, with attention to details ranging from the hotel's Beaux-Arts exterior to the oil lamps hanging in a supply closet, ready to shine bright should the mountaintop electrical system give out. Yet the surreal is never far away, be it a wedding atop a treacherous parapet or the uniform of Zero, the hotel's new lobby boy (Tony Revolori), which features a purple hat bearing the block letters "LOBBY BOY."

Like its precarious historical era and its imprecise geopolitical location, many elements of The Grand Budapest Hotel are tantalizingly ambiguous. It's hard to pinpoint the nationality of individual guests, and Gustave himself is inscrutable: He may be gay, he may be an incurable ladies' man. Or he may just be a congenital pleaser, adopting the exact role required by whoever happens to be nearby.

Video Special: Watch a scene from The Grand Budapest Hotel

One thing The Grand Budapest Hotel never leaves in soft focus is its heart — and that makes this the best Wes Anderson film ever. Love is in the air at the Grand Budapest Hotel, and I mean love of every stripe: There's a warm, unspoken bond between Gustave and Zero. A lovely romance blossoms between Zero and the sweet baker from town (she's played by Saoirse Ronan, irresistible despite the addition of a facial birthmark shaped like Mexico). Gustave loves his hotel; the guests, in turn, are mad about him.

And then there's the palpable affection between Anderson and his loyal repertory company: Swinton, F. Murray Abraham, Adrien Brody, Willem Dafoe, Jeff Goldblum, Harvey Keitel, Jude Law, Bill Murray, Edward Norton, Owen Wilson and more. No matter how small the role, most of these top-shelf stars never pass up an opportunity to work with Anderson.

The fact is, over nearly 20 years Wes Anderson has earned the allegiance of both rabid fans and devoted actors. Now he may finally break through with everyone else, if only they'll check into The Grand Budapest Hotel.