Like Antoine de Saint-Exupéry's 1943 novella The Little Prince, Lois Lowry's The Giver, penned 50 years later, was ostensibly written for a young audience. But the central messages of both books — that matters of the heart matter most and that love cannot occur without the possibility of pain — are profound revelations that speak to grownups everywhere.

In his screen adaptation of The Giver, director Phillip Noyce (Patriot Games, Rabbit-Proof Fence) and his talented cast do an exquisite job of moving the novel beyond the realm of science fiction. They do so by hewing to the moral of its story: Life is not life without loss. 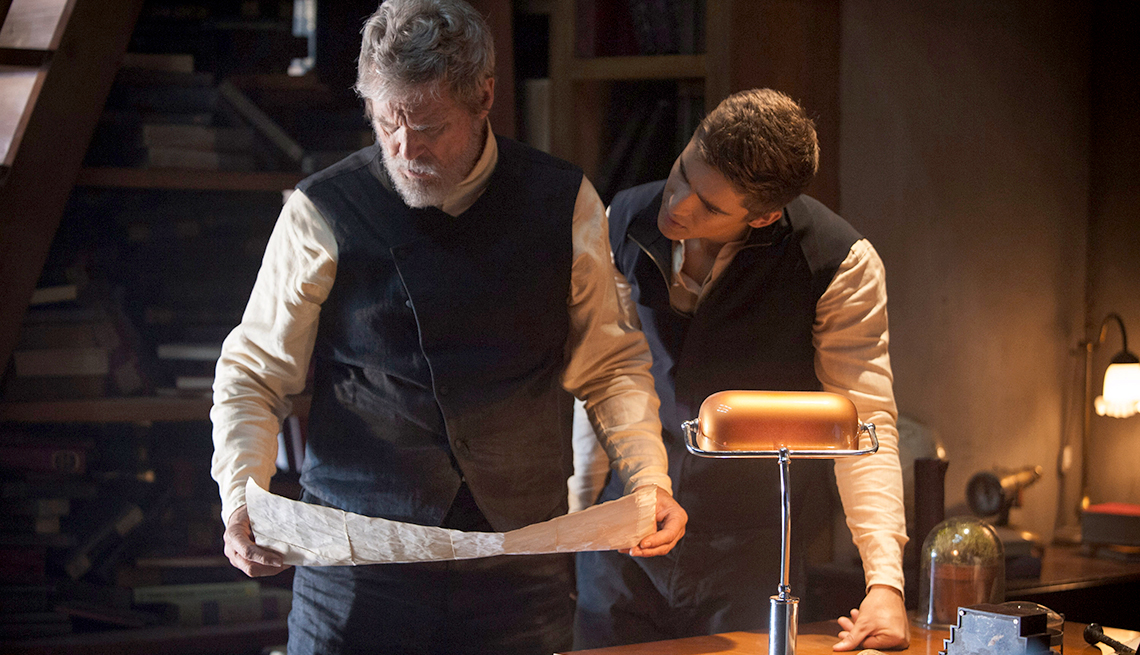 Jeff Bridges and Brenton Thwaites star in "The Giver."

The Giver is set in a futuristic utopia whose citizens have no memory of the world we know today. Violence and suffering have been stamped out because citizens have relinquished their individuality and freedom of choice; daily drug injections squelch their emotions, and they see only in black and white. The Committee of Elders pairs husbands and wives for the purpose of raising children (who are born through surrogates) until they are old enough to take on a vocation such as Birthmother or Nurturer.

Jeff Bridges, with his bearlike gait and thick-tongued locution, is brilliant as the Giver, the sole member of the Community who has memories of humanity — including warfare and killing. His job is to advise the Committee of Elders on how to avoid these sins from the past. It's a heavy burden, yet the Giver retains his humanity, is able to feel love and sees in color.

During a ceremony where the society's young people are assigned their vocations, the Chief Elder (the always fabulous Meryl Streep) chooses a bright-eyed adolescent named Jonas (Brenton Thwaites from Maleficent) to become the Receiver of Memories — the Giver's heir, so to speak. As the Giver transmits his memories (and with them his humanness), Jonas experiences all the pain and joy encoded in them. Realizing that change must come to the Community, the Giver and Receiver set out together to make it happen.

Katie Holmes (Batman Begins) and Alexander Skarsgård (Battleship) as Mother and Father (of Jonas) are terrific at conveying the flatly affected sameness of the Community members. By contrast, Odeya Rush (The Odd Life of Timothy Green) and Cameron Monaghan (of TV's Shameless) play Jonas' best friends, Fiona and Asher, displaying a brightness that hints at the possibilities of change. Taylor Swift (yes, the breakup balladeer) is the previous Receiver of Memories, but her inability to handle the agony and ecstasy encoded in her downloaded recollections has gotten her banished, it would seem, from the Community. Swift's performance is dreamy but low-impact.

The costumes and sets — especially the Giver's home on the verge of this societal island — are stunning. So is Ross Emery's cinematography, which gradually shifts from black and white to full color over the course of the film. And the music by Marco Beltrami (Oscar-nominated for scoring The Hurt Locker) movingly reinforces the drama.

The Giver has had a fascinating — and intergenerational — genesis. Eager to direct his father, Lloyd Bridges, in a film appropriate for his young kids to watch in the mid-1990s, Jeff Bridges stumbled upon the novel while leafing through a book catalog. He was intrigued by its cover, which featured a gold-stamped Newbery Award and an illustration of a "grizzled old guy" who might make a perfect character for his father to play. The project bounced from one studio to another without finding a home — in part, says one of its producers today, because funders were leery of an adult message delivered through a story for young people.

Bridges the Elder died in 1998, and his son is now that "grizzled old guy." But moviegoers will say "Hallelujah!" that one studio — the Weinstein Co. — finally saw The Giver for what it truly is: a grownup story for viewers of all ages.