A family drama centered on a terminally ill patriarch's decision to end his life is unlikely to score big at the box office. That's why first-time director Andrew Levitas — an actor-writer-artist who drew on his experience of witnessing his own father's decline to write the screenplay for Lullaby — deserves praise for stepping into a universe where few boldly go. His talented ensemble cast lifts Lullaby above the level of overly sentimental mush; regrettably, the film's clichéd dialogue, underdeveloped characters and needless subplots keep it from reaching its potential. 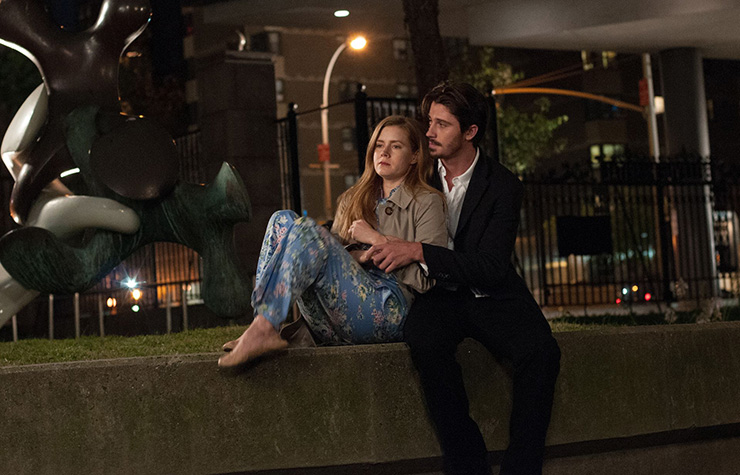 Amy Adams and Garrett Hedlund star in "Lullaby," a somber song of life and the right to die.

Successful Manhattan businessman Robert Lowenstein, played by the highly skilled Richard Jenkins (The Visitor), has been battling cancer for 20 years. "My body is ruined," he tells his family after summoning them to his hospital bedside, where a respirator keeps him breathing.

When Dad gives them the news, along with his dying wish that they host a Passover seder on his behalf in the medical center's chapel, neither child handles it well: Jonathan, a rebel who smokes in airplane bathrooms and hospital stairwells, plunges into emotional disarray. Karen vows to file an injunction to block her father from ending his life.

Jenkins is terrific, bringing nuance to the character of Robert, who has disbursed his fortune in advance of this final act because, as he says, "I've raised a couple of spoiled brats." Speaking with a raspy voice that breaks at just the right moments, Jenkins is funny, cunning and tender.

Not so his spouse and kids, who blurt out one-dimensional reactions that undermine what could have been an authentic portrayal of the conflicted dynamics common to most families. That said, Levitas has done a fine job in casting Terrence Howard as Robert's doctor and Jennifer Hudson as his primary nurse; both actors maximize their minimal screen time.

Perhaps to spring us from Robert's claustrophobic hospital suite (yes, this is a patient of privilege, and, yes, this drama might work better on stage), Levitas concocts a couple of go-nowhere subplots.

One involves the girlfriend (an underutilized Amy Adams, most recently in American Hustle) who just dumped Jonathan. A second tries to show Jonathan gaining acceptance by befriending a bald 17-year-old cancer patient (up-and-comer Jessica Barden) from the hospital's adolescent ward. Alas, neither detour does much to advance the central action or explore the thorny right-to-die debate.

While the seder scene lightens the otherwise maudlin story line, Lullaby's final act reeks of sentimental manipulation. Perhaps Levitas was, in the end, simply too close to his material. Had he stepped back and taken a second look for opportunities to enrich his characters, Lullaby could have been a great movie.