Driven by a larger-than-life performance by Kevin Kline as Errol Flynn and an inspired turn by Susan Sarandon as the mother of his teenage mistress, The Last of Robin Hood is both a diverting period piece and a timely cautionary tale.

If present-day celebrities have learned that today's self-destructive folly is tomorrow's amusing footnote, their prime object lesson could well be Flynn, whose legendary appetites led to numerous sex- and booze-related scandals that hardly nicked his decades-long career. He may have saved the tawdriest for last: An affair with 15-year-old Beverly Aadland, a contract player at the studio.

Kevin Kline is Errol Flynn and Dakota Fanning is his 15-year-old mistress in the Old Hollywood story, "The Last of Robin Hood."

As The Last of Robin Hood tells it, Flynn notices Beverly (Dakota Fanning) on her way to a dance session one day. Assuming the precociously shapely girl to be of legal age, Flynn relentlessly pursues her. At first Beverly is just another conquest, but there's something about her that keeps drawing him back. Just as she's drawn to his superstar charisma, he's attracted to her fresh-faced youthfulness.

Shocked (but not too shocked) to learn that Beverly is only 15, Flynn enlists her mother, Florence (Sarandon), to facilitate things. He drops in at the house and, explaining that he simply wants to help guide young Beverly's career, asks if Flo will accompany them on the Tinseltown party circuit. 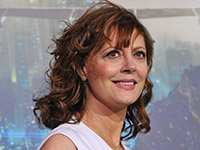 She readily agrees, playing into Flynn's hands as he and Beverly find all sorts of opportunities to sneak off on their own while Flo's head is turned by the glamour of showbiz.

It's Sarandon's performance as Florence that elevates The Last Of Robin Hood above your garden-variety Hollywood biography. We can easily understand the motives of Flynn and Beverly, but what mother in her right mind would turn her little girl over to such a legendary lothario? "He's Errol Flynn!" her disgusted husband screams before leaving her.

The scheme is so transparent only an idiot would fail to see through it. But Sarandon's Flo is no idiot; she's a failed starlet herself who lost a leg in a car accident, and when she sees her daughter on the cusp of celebrity — even on the arm of a man 35 years her senior — she projects her unrealized dreams onto the poor girl. Sarandon's triumph in The Last of Robin Hood is to ingeniously portray a woman who knows exactly what's going on, but who manages to wall off what she knows from what she wants to believe. That doesn't make it any less squirm-worthy, of course, to watch Flo serve up her child on a silver platter.

As Flynn, Kline presents a guy who shows the world a swashbuckling hedonist, but who is also growing tired of the act, both emotionally and physically. (Flynn's hard partying would catch up to him; he essentially died of old age at 50.) After that initial physical attraction, Beverly becomes the last possible station stop for the runaway train that is his life.

For Old Hollywood fans, the most fun scene in The Last of Robin Hood comes in the office of director Stanley Kubrick (Max Casella), who wants to cast Flynn as the lead in his screen version of Lolita. But Flynn will agree to play the pederastic Humbert Humbert only if Beverly gets the title role. Kubrick refuses — Beverly's a dreadful actor — so Flynn walks out. (The parts went to James Mason and Sue Lyon.)

Neither Fanning nor Sarandon is in that scene, but their performances in the rest of the film make it work. We need to buy into Flynn's obsession with Beverly, his real-life Lolita, and the comely young Fanning makes that a foregone conclusion. Our thoughts also fly to Florence, who sacrifices her daughter, her self-respect and her marriage on the altar of success, only to see it all come crashing down in fiery rejection.

A film about actors, played by some of the best actors the movies have to offer, The Last of Robin Hood still manages to connect to the rest of us with characters whose flaws, though writ large, are all too human.