Clint Eastwood's story of Frankie Valli and the Four Seasons begins where the group itself did: on the mean streets of 1950s North Jersey, with the gray towers of Manhattan looming across the Hudson River like some dystopian Oz.

We're immediately buttonholed by smiling street hustler Tommy DeVito (Vincent Piazza), who brazenly breaks the movie's fourth wall to set the scene. Tommy has everything under control, ya see, 'cuz he's connected to the benevolent local mobster Gyp DeCarlo (Christopher Walken) — whom we meet as he's being shaved by an inexperienced teenaged apprentice named Frankie. (That's Frankie Valli to you.) He's not much of a barber, this kid, but man can he sing. Like an angel.

Pretty soon Frankie and Tommy and two pals are a quartet, belting out songs somewhere between doo-wop and rock 'n' roll.

The group's name changes from week to week — they go by the Four Lovers, the Tropics, the Romans — until the flickering sign of a bowling alley inspires them for keeps. But their harmonies — those are as smooth as Mama's marinara.

And so the familiar street-to-stardom trajectory begins. Saddled with at least some semblance of a real-life story, Jersey Boys doesn't pack many narrative surprises. 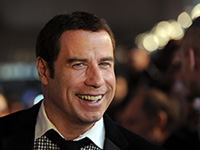 12 celebrated men who hail from the Garden State

The boys struggle. They hit it big. They quarrel. One of them screws up big time. They split. Finally, decades later, they reach some modicum of reconciliation.

Any garden-variety show-biz bio will give you those elements. What it won't give you is the incomparable Four Seasons songbook: "Sherry," "Big Girls Don't Cry," "Walk Like a Man," "Dawn," "Rag Doll," "My Eyes Adored You" and "Can't Take My Eyes Off You," to name just a few. Then there's the electrifying performance of John Lloyd Young, who won a Tony Award as Frankie in the Broadway production of Jersey Boys and who continues to channel Valli with eerie authenticity.

And above them all, soaring like a sea gull, is the impossibly bell-like sound of Valli, a kid with the voice of a choirboy and a face to match.

Eastwood — who has always made music an important part of his films — seems occasionally reluctant to let the music take over in Jersey Boys. We get mere snippets in the early going, and it seems like an hour before the tunes really start to roll.

Because the director is genuinely interested in the boys' life story, we can sense him working overtime to keep Jersey Boys from becoming a tune-heavy variety show along the lines of Mamma Mia! or Rock of Ages. He lets things get a bit melodramatic at times, but never makes us wait too long for the fun parts. And when the classic songs are performed at last, it's in a torrent of pop nirvana.

The Jersey Boys cast is uniformly excellent, even if it takes a bit of audience goodwill at the outset to accept these close-to-middle-age players as a bunch of 16-year-old kids. And their later old-age makeup causes them to resemble some mugs who've just been fished out from under a pier in Hoboken.

Walken is the film's resident grownup, and as Gyp DeCarlo he's just a big ol' lovable lug. (I guess that's sort of true: The real Angelo "Gyp" DeCarlo "humanely" executed enemies by shooting them through the heart.) If you're a die-hard Four Seasons fan, your only complaint about Jersey Boys will be that Clint Eastwood couldn't stuff every last hit song in. But it wasn't for lack of trying — and face it, you've still got those old records at home anyway.