If you know Rolling Stone magazine, you know the gonzo style of reporting originated by '70s journalist Hunter S. Thompson and the equally cynical and riotous artwork of his sometime collaborator Ralph Steadman. First-time film director Charlie Paul attempts to capture the appeal of the prolific 77-year-old British cartoonist and artist in a new bio-doc, For No Good Reason. The result is a visually mesmerizing work that leaves us wondering precisely who Steadman is. 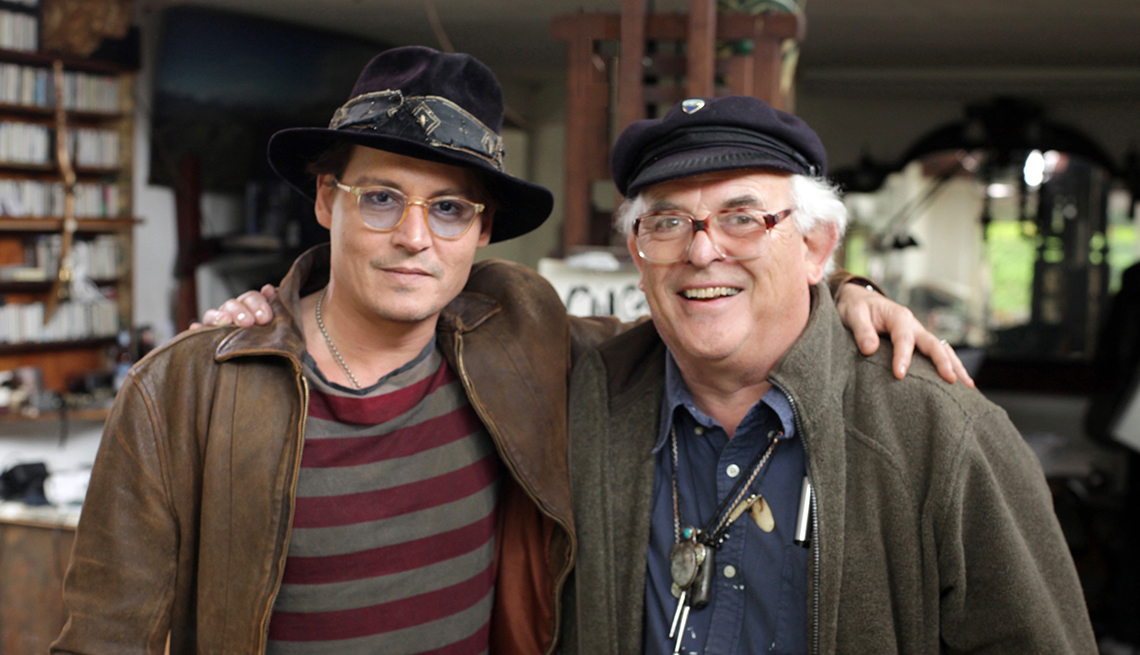 Johnny Depp interviews his friend, the artist Ralph Steadman, and narrates his story in "For No Good Reason."

Most of the action takes place inside Steadman's workshop on his sprawling estate in the English countryside. There we watch in fascination as the caricaturist blows ink through tiny tubes to produce his distinctively fantastical canvases.

For No Good Reason is narrated by Johnny Depp, a friend of Steadman's who portrayed Thompson in two films: Fear and Loathing in Las Vegas (1998) and The Rum Diary (2011). Regrettably, we never learn how the two men met or what drew them to each other. Puffing away on one hand-rolled cigarette after another, Depp obliquely interviews Steadman and, all too often, volunteers flattering commentary as he leafs through the artist's collections.

Interspersed among these sessions are animated sequences — impressive, I'll grant you — meant to re-create the artist's process and the social views that drove him. We also get cameos by semi-celeb fans involved in Steadman's career, including Monty Python and the Holy Grail director Terry Gilliam and Rolling Stone editor Jann Wenner.

Most intriguing is the archival footage of the boozy, drug-addled Thompson himself: In one of their final exchanges (Thompson killed himself in 2005), Steadman brazenly asserts that the journalist exploited their collaboration to gain greater fame. (Thompson fans in the audience may be excused for muttering, "Other way 'round, dude!")

Early in the documentary (which Paul spent 15 years making), Steadman says his creativity was fueled by a desire to change the world. But neither Paul nor Depp tease out the roots — or the manifestation — of that crucial motivation.

Why did Steadman team up with Thompson in the first place (on a 1970 Scanlan's Monthly magazine piece called "The Kentucky Derby Is Decadent and Depraved") and continue to work with him for the next 35 years? For no good reason, it would seem, beyond a vague shared desire for wild chaos.

With Steadman's wife and children playing nonspeaking roles in the background, this portrait of an artist remains a little too "inside baseball" to reveal what makes its subject tick.