Though it premiered in Toronto last fall, The Railway Man is being released only now by the Weinstein Company. It seems an odd choice, given April's status as the cruelest month for movies, for The Railway Man is a powerful film that deserves a better viewing season.

Based (like the upcoming Unbroken) on an amazing true story and peopled with Oscar-winning actors delivering strong performances, The Railway Man is a romance, a classic war drama and an interpersonal examination of reconciliation all rolled into one. It was inspired by former British soldier Eric Lomax's memoir of the same name, first published in 1995. (Lomax died at 93 in 2012.) 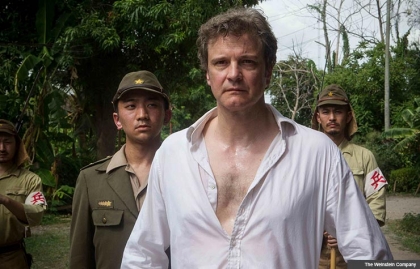 Soon married, the couple settles in Berwick-upon-Tweed, where Patti realizes that her new husband — who had served with the British army in the Pacific theater during World War II — is suffering from full-blown post-traumatic stress disorder. She finally persuades his buddy Finlay (terrifically cast in Stellan Skarsgård) to break the code of silence that her husband won't. Thus does Patti discover the extent of the atrocities Lomax endured after Singapore fell in 1942.

In flashbacks we learn that Lomax and his unit were taken prisoner by the Japanese and put to work building the Burma Railway, later dubbed "the Death Railway" because inhumane treatment killed so many Allied soldiers during its construction. Lomax (his younger version wonderfully portrayed by Jeremy Irvine of War Horse) bears the brunt of the torture, including indescribable beatings and waterboardings, after his Japanese captors discover railway maps and a radio in his possession.

Forty years after his ordeal, Lomax, at the urging of Patti and Finlay, returns to Thailand to confront his wartime tormentor, Takashi Nagase (Hiroyuki Sanada of The Twilight Samurai), now working as a guide at a war museum on the site of the old POW camps. Lomax, having fiercely stemmed his rage for decades, meets a compassionate, repentant Nagase. The ensuing interaction is profound.

What's lacking in cinematography — the English scenes are shot in gloomy grays, while those in Thailand feature ersatz jungle backdrops — is nicely offset by Australian composer David Hirschfelder's moving score (he received Oscar nominations for both Australia and Shine). And though you might question how the action unfolds, the script, interpreted by such a fine troupe of actors, drives home the beautiful message behind The Railway Man: forgiveness.

Watching the healing power of such an act — and how it can even kindle true friendship — tells us all we need to know about the lunacy of war.