Thoughtful, imaginative and respectful of its source material, Russell Crowe's new film Noah is, to date, the year's biggest surprise. It's a biblical epic that raises fair questions and doesn't shrink from offering hard answers.

Noah is the rare Bible-based movie that has something for everyone to disagree on. Moviegoers who demand strict orthodoxy from their Bible flicks will hate the flights of fancy cowriter and director Darren Aronofsky has concocted; religious skeptics who sneer at any hint of biblical veracity will deplore how literal he is, right down to the specific creation of Adam and Eve and the depiction of the Earth's globe from space, covered with a blanket of cyclonic rain clouds. The happy result: Everyone leaves the theater with something to talk about.

Mostly, Aronofsky has crafted one firecracker of an adventure film with spectacular effects, vast warring armies and a disaster scenario for the ages. And at its center is a splendid performance by Crowe, who won an Oscar for his performance in Gladiator. 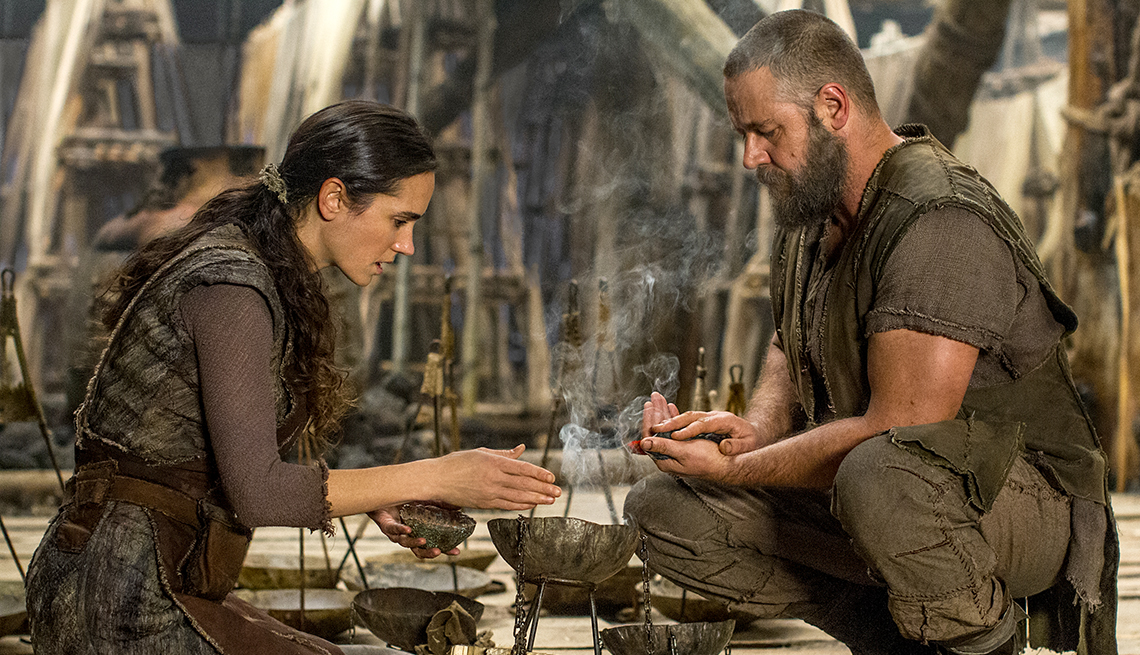 Historically, Noah has been a thankless role for movie actors: From John Huston to Jon Voight, they have always ended up playing second banana to a boatload of adorable critters.

But Crowe's Noah is not the benign bearded patriarch of a million Sunday school classes.

This Noah doubts, he argues, and at times he misinterprets God's commands. In perhaps the film's most powerful scene, Noah is tortured by the sounds of humanity screaming for help and ultimately drowning outside the ark.

As the reality of humankind's virtual eradication groans on day after day, Crowe's Noah teeters on the edge of madness — and while we are at times repulsed by his near-tragic misreading of God's will, there's not a moment when Crowe doesn't give us a clear window into his motivations. One of the screen's great actors, Crowe — reunited here with his A Beautiful Mind costar Jennifer Connelly as Mrs. Noah — gives one of the most finely detailed performances of his career.

Aronofsky has approached the Noah story asking profoundly simple questions — the type that kids ponder when they're being shown picture books of that pretty boat-shaped ark with the smiling animals on it: Didn't everyone try to get on the ark when it started raining? (You bet!) What was it like with all those dead bodies floating around? (Not pretty!) Was Noah really that much better than the people who ended up in the drink? (No, but he had one thing the others did not, faith.)

If you're going to really tell the story of Noah, you've got to be honest about its inherent brutality and deal with its consequences. Aronofsky and his cast do just that, and if their conclusions aren't always especially satisfying, well, at least they were honest enough to give it a shot.

If Noah has one major distraction, it's Aronofsky's strident ecological message, which coats the film's early going like an Exxon Valdez oil slick. In 10 short generations since Adam, it appears, humankind has chopped down all the trees, strip-mined the world to a lunarscape and eaten just about all the animals. Somehow, even in a film based on the Bible, Aronofsky finds a way to genuflect at the altar of environmentalism, Hollywood's current religion of choice.

Much is being made of the liberties Aronofsky has taken with the Noah narrative. Most glaring is his creation of a race of giant rock creatures — called the Watchers — who protect Noah and his family and help him build the ark. These guys are Aronofsky's version of one of the Bible's most puzzling groups, the Nephilim, who appear to have been the offspring of angels and human women. It's doubtful that Bible scholars would suggest the Nephilim were superstrong rock people, but in the end Aronofsky's guess is as good as anyone's.

Anthony Hopkins is a welcome presence as Noah's old (old!) granddad, Methuselah, and Nick Nolte chews the bark as the villain, a ruthless warlord who nevertheless makes a fair point when, as the rains begin, he looks heavenward and declares, "I'm made in His image, too!"

That sort of dramatic embellishment won't go down well in certain corners. But listen, those of you who will sit around your Easter dinner table smugly tut-tutting Aronofsky's Noah and then gather before the TV for Cecil B. Demille's The Ten Commandments, take note: In the Bible there's no Edward G. Robinson character who sneers, "Nyeah! Where's your messiah now, eh Moses?"