Would we give Captain America: The Winter Soldier a second thought if Robert Redford and Samuel L. Jackson weren't on board? The two veteran stars play surprisingly pivotal roles in the latest action spectacle based on a Marvel comic book character.

Jackson is back as Nick Fury, a kind of father figure to Captain America and his fellow superheroes (he pops up in various Marvel-based movies). Redford is Alexander Pierce, the charismatic head of S.H.I.E.L.D. (Strategic Homeland Intervention, Enforcement and Logistics Division), the sort-of government agency that gives the heroes something to do as it battles an international society of villainy called HYDRA. (An issue that has vexed comic book nerds for a generation is why S.H.I.E.L.D. should be an acronym when HYDRA is not.) 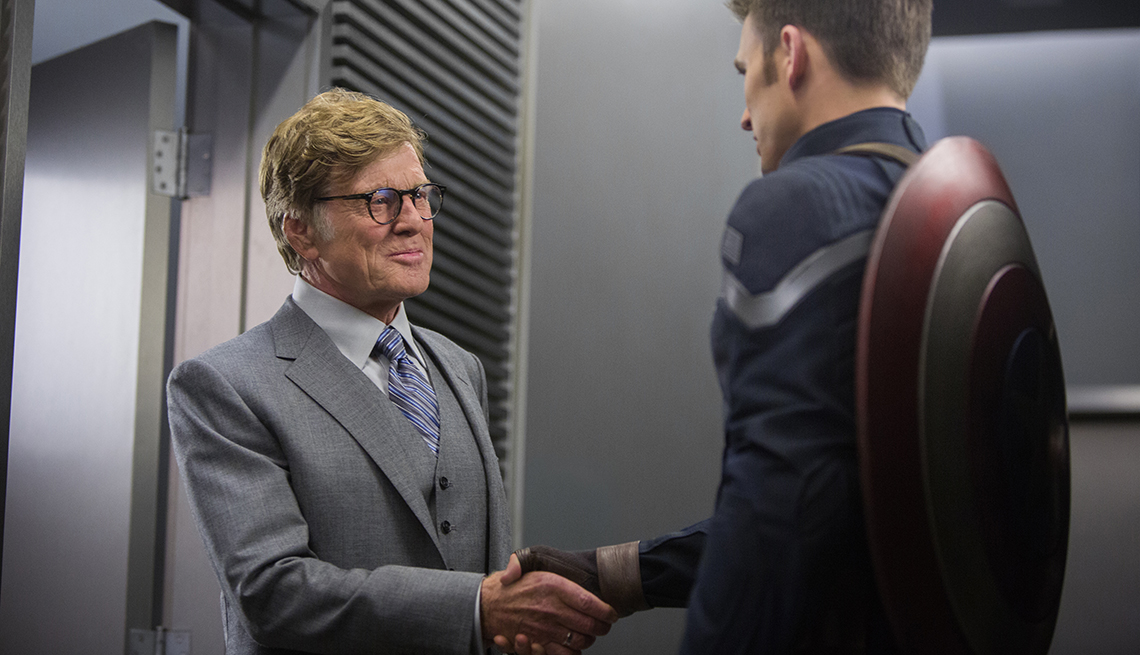 Fury and Pierce are old friends, but we can tell something's not right: One of them may also be working for HYDRA. When we learn the truth, we could not be less surprised.

But there's a reason Jackson and Redford are movie stars, and their wattage is at full luminosity here. There's also a fun cameo by Garry Shandling, who appears in multiple Marvel movies as a diabolical U.S. senator.

Then there's the star, hunky young Chris Evans, who has played the title character in several Marvel films as a guy whose chief personality trait is his bulging biceps and whose pecs enter a room 30 seconds before the rest of him does. Similarly, as his sidekick Black Widow, Scarlett Johansson's chief superpower seems to be the ability to expand her lips to the size of Buick bumpers. It's not fair to critique the acting chops of Evans, who seems to be making a career of this Marvel superhero stuff, but Johansson appears to have divided her career between Oscar-caliber turns in small movies (Her) and just-spell-my-name-right throwaways like this.

The trouble is, the more time we spend with the youngsters, the more we long to get back to Redford and Jackson. Granted, Jackson does get his very own rock-'em, sock-'em set piece, roaring through the streets of Washington, D.C., in his SUV while what looks like the entire city police force tries to run him off the road. Redford, looking dapper in his snappy suit, is asked to do little more than pose handsomely in his executive suite, leaning against the floor-to-ceiling window like the cover boy on AARP's version of GQ. Still, when he's on the screen — and especially when that voice rolls out, smooth as water over the rocks in a trout stream — Redford is all we care about.

We'll not get into the weeds regarding Captain America's baroque backstory; suffice it to say he first appeared as a comic book character before the United States entered World War II — when, the legend goes, the Army shot an out-of-shape farm boy named Steve Rogers full of power juice, turning him into the greatest fighting man the world has ever known. Plunged into a deep freeze after the war, he has now been thawed out in the 21st century, where he must fight off technologically advanced supervillains. Oh, and get used to living in a world where 70 years of history have passed him by.

For grownup movie-lovers, the second half of that challenge could use more focus; here's a guy who fell asleep in a world that communicated by walkie-talkie and woke up in one where everyone carries a camera phone in a pocket. There is one nice moment when we hear Big Band music playing in Rogers' apartment, but for the most part he seems utterly — and boringly — at home in his new century.

Exploring such matters would require subtle reflection, and that's not the coin of the realm in a Marvel movie. Indeed, Captain America: The Winter Soldier may have one of the highest fight scene-to-exposition ratios in movie history.

Because Captain America seems to fight only with his hands and his borderline-magical shield (seriously, dude — get a gun!), the action sequences are virtually all close-up affairs, making it occasionally difficult to tell who's throttling whom. Directors (and brothers) Anthony and Joe Russo make clever use of those claustrophobic rules of engagement, especially during a battle royal between Captain America and about a dozen bad guys — in an elevator.

With a slightly deeper nod to the lead character's Greatest Generation roots and some more attention to the hero's time-skipping journey, Captain America: The Winter Soldier could have been an appealing entry in the Marvel action-movie canon. As it is, it provides a decent shot of adrenaline — and a chance to relish, at least for a while, two veteran pros showing the youngsters how it's done.