Stand Up Guys really wants to be a jaunty tale of three aging gangsters enjoying one last night of carousing before mortality finally catches up with them. But it also wants to be a gritty portrait of social outcasts living on our culture's seedy underbelly. And a touching portrait of lifelong friendship. And an inspiring invitation to live life to its fullest, right until your last breath. Also a raucous comedy. Plus a sentimental melodrama. It wants to remind us of Goodfellas, The Last Detail, Carlito's Way, and even Butch Cassidy and the Sundance Kid. 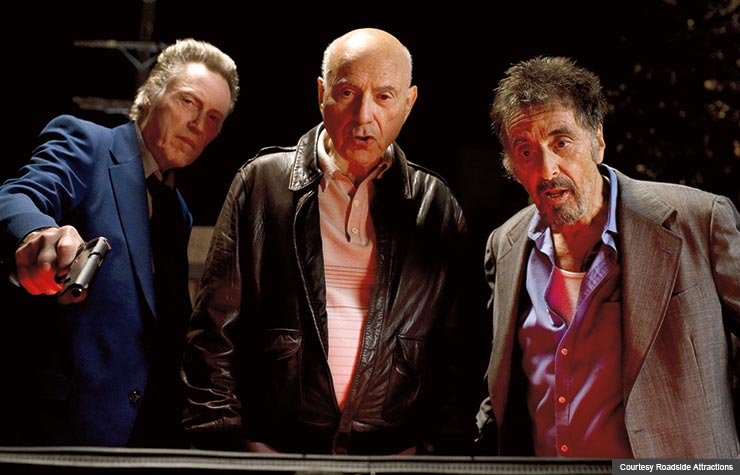 Christopher Walken, Alan Arkin and Al Pacino (from left to right) star in "Stand Up Guys."

In the end, Stand Up Guys keeps almost none of its promises and succeeds only in dragging us along on a night-long escapade with a bunch of people we don't really like. Seldom have I longed so desperately for the sun to rise, if only to hasten the coming of the closing credits.

Al Pacino is Val, out of prison after 20-some years. He did time for a heist that went terribly wrong: He accidentally shot and killed one of his fellow crooks, the son of a small-time mob boss. At the prison gate Val is met by his oldest pal and former partner in crime (Christopher Walken, recently seen as a musician in A Late Quartet).

But Doc (the main characters in this film have no apparent last names) isn't just there to serve as a one-man welcoming committee: The crime boss, inexplicably named Claphands (Mark Margolis), has assigned Walken to put a bullet in Val's head in retaliation for the long-ago death of his son. Val doesn't want to do it, but Claphands has him over a barrel … a gun barrel, that is (yes, I missed my calling as a Hollywood ad copywriter).

Val instinctively knows what Doc's assignment is, and he's surprisingly OK with it. Doc's got until 10 a.m. the next day to do the deed, so the two embark on one last night of debauchery (at a local cathouse) and criminal high jinks. Along the way they stop by a nursing home and rescue their old getaway driver, Hirsch (Alan Arkin), to tool around town with them in a stolen car.

And so here are three of the screen's most gifted actors, pouring every ounce of their talents into a plot that just took me two long paragraphs to set up — and believe me, that's just the setup.

Stand Up Guys is like one of those endless dreams in which you have to get to a meeting, or a big interview, or a high school test, and you encounter one outrageous obstacle after another, like roving packs of jackals or yawning, fire-filled crevices (or is that just me?).

By about the one-hour mark, had Doc turned to the camera and offered to plug me instead of Val — well, that may well have been an offer I couldn't refuse.