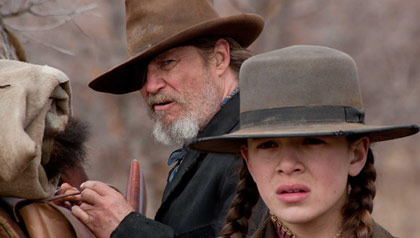 The Coen brothers’ remake of the classic Western True Grit offers lots of macho swagger and plenty of big-sky scenery, but somehow it fails to move the viewer. I intentionally watched the film without reading the 1968 novel by Charles Portis or seeing the original film adaptation — released in 1969 and starring John Wayne and Glen Campbell. I wanted to avoid being lulled by a familiarity with the story line.

Indeed, the story that True Grit tells is powerful enough. An extremely precocious and determined 14-year-old girl named Mattie Ross (played in the remake by the very talented Hailee Steinfeld) sets off to find Tom Chaney, the man who senselessly murdered her father, and see him hanged for the crime. She arrives in Fort Smith, Arkansas, to claim her dad’s body, then performs some wily horse trading to acquire the cash she needs to set her plans in motion. She hires the heavy-drinking, trigger-happy, eye-patch-wearing U.S. Marshal Rooster Cogburn (delightfully portrayed by Jeff Bridges) and insists that she accompany him on horseback as they head into dangerous Indian Territory to track Chaney down. A Texas Ranger named LaBoeuf (Matt Damon fills the role adequately) is after Chaney as well, for a murder in his state, and the threesome ride off together.

The character portrayals here are certainly rich, and the actors offer nuance in their movements and gestures — except for Josh Brolin, who looks great as Chaney but comes off as oddly wooden. Joel and Ethan Coen (who share both screenwriting and directing duties) have the characters speak with the formal language and stiff linguistic rhythm Portis adopted for the novel, and while that may work on the printed page, on screen the ploy strips the dialogue of emotional depth. I, for one, kept hearing lines from a script rather than real individuals interacting.

Perhaps the main problem with True Grit is that, while it does a serviceable job of portraying the “true grit” required to take on the 19th-century Wild West, the Coens choose not to insert any surprising plot twists or to perform any of their trademark ingenious cinematographic stunts. Hence, the takeaway is unsatisfying. The parts all work neatly, but the sum won’t inspire you.