When Mel Brooks broke into show business in the late 1940s, more people attended burlesque shows than owned TVs. To the young World War II vet from Brooklyn, something had to change in the world of standup comedy.

"I mean, the jokes were funny," he says, "but they were somehow uninspired. Like, 'My wife asked me to take her somewhere she'd never been before. So I took her to the kitchen!' " Bah-dum!

The comedian and filmmaker talks with AARP's Bill Newcott, who asks him about his roots.

With his impeccable delivery and Borscht Belt chutzpah, the 86-year-old Brooks turns even that old chestnut into a corker. He probably could have had a good run in the standup comedy mold of Henny Youngman and Jack E. Leonard. But the spark of genius would not let him settle for that, and a new landmark book/DVD/CD set from Shout! Factory, The Incredible Mel Brooks: An Irresistible Collection of Unhinged Comedy, is evidence.

"I'd go up there and say, 'Good evening, ladies and Jews.' Then I did imitations," he recalls. "I'd do Cary Grant, and I'd do Cagney. But then I'd throw in Thomas Jefferson or Ben Franklin. And you know, who's gonna criticize that? Who's gonna stand up in the audience and say, 'That is not Thomas Jefferson! He never had a lisp!' "

That brand of straight-faced absurdity doubtless confused many of Brooks' early audiences, but it paved the way for latter-day comic revisionists such as Steve Martin. Another of Brooks' early bits, "The Man of a Thousand Faces"— which involved Brooks simply standing up there making one stupid face after another until the audience simply couldn't stand it any more — predated the similarly inspired antics of Andy Kaufman by more than two decades.

And really, if you want to understand what's become funny over the past half-century, look no further than Brooks' landmark 1968 comedy, The Producers, which mined racism, greed and the Third Reich for a kind of primal laughter nobody had even tried to tap into before that.

Brooks breathes the rarefied air of those who have won an Oscar, an Emmy, a Grammy and a Tony. Next year he'll receive the American Film Institute's Life Achievement Award. PBS will air an American Masters special about him in May. And then there's the CD/DVD set. "It's archival," he says, "the real me. They found a lot of it on YouTube!"

[The clip above is from an HBO special Mel Brooks Strikes Back debuting on Dec. 10]

The collection includes a speech class recording Brooks made at New York's New School in 1947. Young Brooks — identifying himself by his original name, Melvin Kaminsky — recites what he calls a "desecration" of Keats' "The Eve of St. Agnes." Then come clips from Sid Caesar's 1950s TV programs — for which Brooks cowrote, along with the likes of Woody Allen, Larry Gelbart and Neil Simon.

One clip from the late 1980s reunites most of the show's writers with Caesar in a panel discussion, and even after all those years, the writers still recall how they clashed with the young upstart Brooks.

"It ended up in love, but there was a lot of hatred for me at the beginning," Brooks now says matter-of-factly. "I was always selfish, I was always late, I was always arrogant. People would ask, 'Well, who do you think the best writer is?' And I'd say, 'It's obviously me!' " 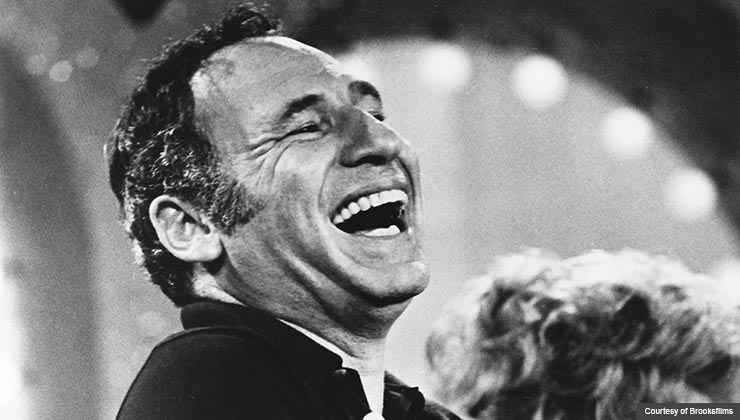 Mel Brooks, in a happy moment. This image graces the cover of his new DVD/CD collection.

Several segments on the new DVD set are devoted to "The 2,000 Year Old Man," a routine that Brooks and his pal Carl Reiner performed at parties for 10 years before Steve Allen persuaded them to make a record in 1960. Reiner is the straight-arrow interviewer; Brooks is the extremely old fellow who, although he has been present at virtually all of history's most momentous occasions, remains defiantly, hilariously Jewish. It's a reminder that the one thing that Brooks has worn as a badge of honor from his earliest days is his almost giddily joyful Jewishness.

"I think there is a strange phenomenon: Whatever litter box you were born into, you still salute as critical to your nature and your life. There's no choice. It's the flag! I gotta salute that flag! So there are two things that I am very excited and patriotic about: One is being a Jew and the other is being a Brooklynite," Brooks says.

From The Producers onward, Brooks has taken heat from some corners for lampooning Hitler and Nazis. "Springtime for Hitler," the pivotal musical number in The Producers, famously employs goose-stepping showgirls. He disguises himself as Hitler in To Be or Not to Be (1983) and in a 1983 music video performs his notorious "Hitler Rap." The centerpiece of Brooks' comedy History of the World: Part 1 is a splashy musical number about the persecution of Jews during the Spanish Inquisition. Brooks offers no apologies. For him — and by extension, for the rest of us — his outrageous takes on Jewish history are a form of therapy.

"I didn't know how to deal with my frustration, with my anger at not being able to do anything about this incredible phenomenon of rounding up my people like cattle and decimating them," he says. "I think unconsciously I was always looking for some payback, some answer. I knew that if I were serious about it, my voice wouldn't stick out; it would just be lost in the River of Woe.

"I realized I couldn't get on a soap box and match these guys for their fervor and their talent for oratory. But they don't know a joke from a mockingbird. They don't know nothing about humor.

"That's my edge. My edge is to deflate them with humor. I knew it. I knew that was my job."