'The Wizard of Oz' Hits Theaters in IMAX 3-D

10 fun facts to get ready for the classic movie's return 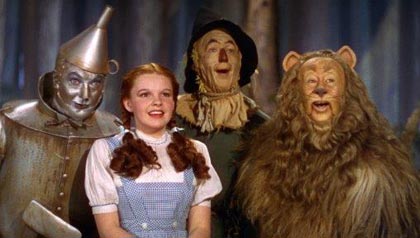 We're off to see the Wizard again — and, this time, it's in IMAX 3-D. The remastered beloved musical fantasy starring Judy Garland as Dorothy will return to theaters for a week starting Sept. 20. A new DVD collection including a 3-D Blu-ray will be available Oct. 1.

Discuss your memories of The Wizard of Oz

It's all in preparation for The Wizard of Oz's 75th anniversary next year, which also may see several Oz-themed TV series, now in development, make it to air. For boomers who well remember the annual prime-time TV airings of the film, this will be a rare opportunity to view a childhood favorite on the big screen.

"You get more out of it that way," says John Fricke, an authority on all things Oz whose fourth book on the movie, The Wonderful World of Oz: An Illustrated History of the American Classic, is out this fall. "It was designed to be seen in a movie theater and enjoyed with others. The more you watch it as an adult, the more you marvel at how they did all this without computers — the monkeys with their wings, the cyclone, the melting witch."

The scene that Fricke is most excited about viewing in three dimensions? "That first image of the Emerald City across the poppy field. Just seeing Judy Garland up close is going to be a thrill."

And do take the grandkids, even if they might be as scared of those flying monkeys as you once were. "We say the age range for Oz is fetal to fatal," says Fricke. "From way young to way old." To prepare for its return, this whiz of an expert shares 10 random but fun facts you might not know about The Wizard of Oz. 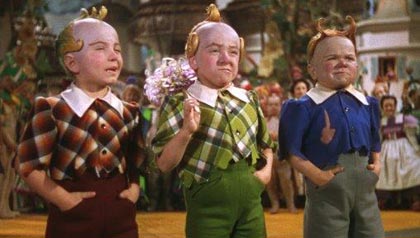 Only two of the more than 100 actors who portrayed the Munchkins are still alive.
Warner Bros Entertainment, Inc.

1. How many of the Munchkins are still alive?

Of the 124 actors (not including child stand-ins) who portrayed the diminutive citizens two are known to be living, Fricke says. They are Jerry Maren, 93, the middle Lollipop Guild kid who hands Dorothy a sucker, and Ruth Duccini, 95. A third Munchkin, Margaret Pellegrini, one of the "sleepyheads" in the nest, recently died at age 89. Fricke says Pellegrini, who regularly attended Oz fan events, "was endlessly energetic, had extraordinary powers of recollection. And she was a classy, common-sensical, down-to-earth, funny, huge-hearted, indefatigable human being."

2. How many Munchkin actors actually use their own voices onscreen?

Only two, Joseph Koziel and Frank Cucksey. The rest of the Munchkin dialogue was dubbed.

Walt Disney wasn't able to secure the rights to make a movie out of L. Frank Baum's book back in the '30s, but there are two Disney links: The last of four Munchkins who encourage Dorothy to "follow the Yellow Brick Road" has a high-pitched voice that sounds like cartoon dog Goofy. It is Goofy — actually the actor who spoke for him, Pinto Colvig. And during the Tin Man's rendition of "If I Only Had a Heart," a female voice is heard singing, "Wherefore art thou, Romeo." That's Adriana Caselotti, who is the voice of Snow White in Disney's 1937 animated feature.

Next page: Who was originally cast as the Tin Man? » 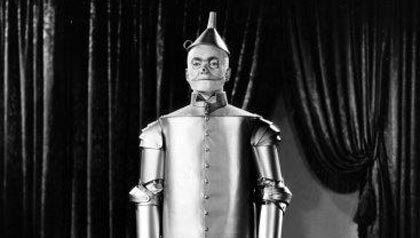 4. Who was originally cast as the Tin Man?

Many think it was Buddy Ebsen of The Beverly Hillbillies fame, who became ill after filming began from the aluminum particles that were blown onto his face and coated his lungs. After an adjustment to the makeup, Jack Haley replaced Ebsen in the part.

However, Ray Bolger was first picked to be the Tin Man but insisted on playing the Scarecrow instead. As Fricke wryly notes, "Bolger got immortality. Ebsen got aluminum poisoning."

5. How is the distinctively sinister theme music that accompanies both Miss Gulch on her bike and the Wicked Witch of the West a case of recycling?

It is a distorted and repeated version of another Oz song, "We're Off to See the Wizard."

6. How many times was a double used onscreen as Dorothy?

Stand-in Bobbie Koshay subbed for Judy Garland in three scenes: When Dorothy falls into the pig pen; when the winged monkeys pick her up from the Haunted Forest; and when Dorothy opens the door to Munchkinland while wearing a brown-and-checked dress and steps way back.

7. What is the name of the horse that pulls Professor Marvel's wagon?

Professor Marvel, played by Frank Morgan — who shows up in five roles, including the Wizard — reveals his steed's name after saying goodbye to Dorothy: "Better get under cover, Sylvester — there's a storm blowing up." 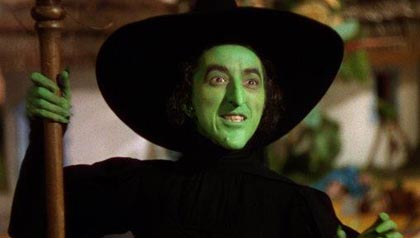 Margaret Hamilton as the Wicked Witch of the West.
Warner Bros Entertainment, Inc.

8. What do the Wicked Witch's guards chant as they march into her castle?

The source of much speculation by Oz fans over the years has produced such interpretations as, "All we are, we owe her" and "Oh, we owe the Old One." Last year's animated hit Wreck-It Ralph even offered up a version that began "Oreo."

But Fricke says the conductor's page of the original orchestration for the film reveals it is simply gibberish: "O-Ee-Yah! Eoh-Ah!"

9. What simple trick was used to make it seem that the Wicked Witch's head was shrinking as she melts?

The size of her pointed hat was increased.

10. Is it true that a person is seen hanging himself in the background after Dorothy meets the Tin Man and they head off to the Emerald City with the Scarecrow?

Probably the most notorious urban legend surrounding The Wizard of Oz, popularized after home viewing allowed freeze-framing and slow motion, has taken several forms. The moving suicidal figure is alleged to be either a lovelorn Munchkin, a studio executive upset about cost overruns, a stagehand bereft because he could not get a date with Judy Garland or an actress upset about not getting a part. Fricke says it was just one of several birds rented from the Los Angeles Zoo — most likely a crane. "Once you know" what it is, he says, "and as prints of the film have become clearer, it is a lot more obvious." 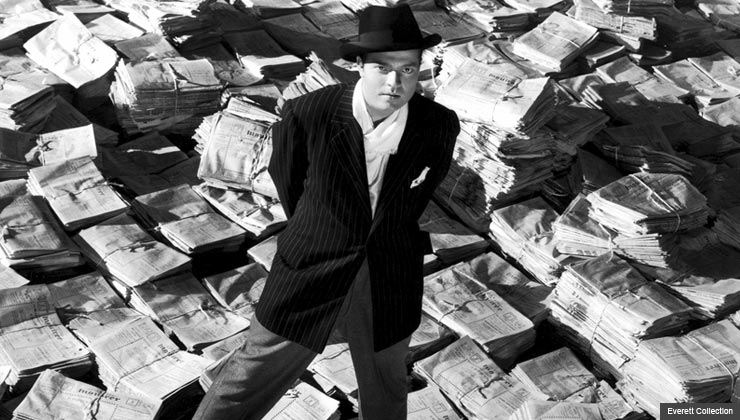 Of course, 'Citizen Kane' is on our list. Check out the others and tell us what's on yours.