But with a sharp, funny script and strong performances from Joseph Gordon-Levitt, Scarlett Johansson, Julianne Moore and Tony Danza, the film succeeds as a cautionary tale that may lead millions of guys to (a) stop living in a fantasy world that reduces women to subservient sexual playthings or (b) remember to clear the memory on their laptops before snapping them shut. 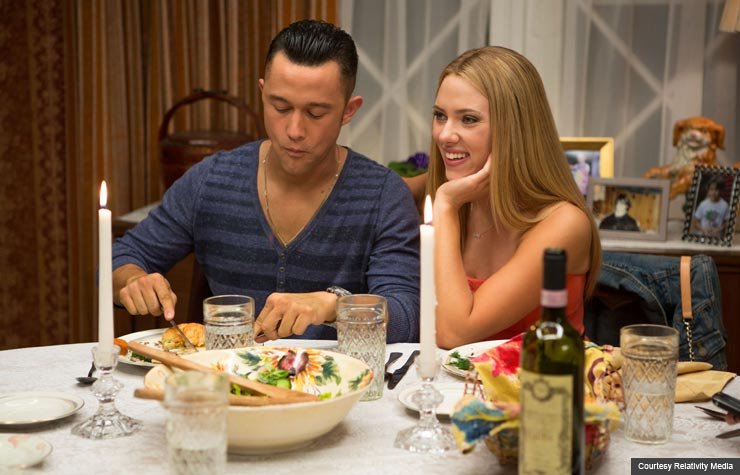 Gordon-Levitt (Inception, 3rd Rock from the Sun), who also writes and directs here, plays Jon. His North Jersey friends have added the "Don" in tribute to his ability to pick up beautiful women at nightclubs. They think he's got it all, and frankly, so does he.

Before long, though, Jon is undone by his secret life, and he finds himself in the company of a strangely melancholy older woman (Moore, growing more radiant with each passing year) who helps bring some perspective to his life. As Jon, Gordon-Levitt exudes easy charm, his dimpled, squinty smile masking his character's ultimate cluelessness.

The film's funniest moments come around the family dinner table. Glenne Headly (Mr. Holland's Opus, Dick Tracy) is instantly endearing as Jon's long-suffering mom, who wants nothing more than to see him come home with the future mother of her grandchildren. Danza gives a startlingly direct performance as the dad; with a single look and a perfectly timed throwaway line, he shows us precisely where Jon gets his warped perspective on human relations.

The only trouble with Don Jon is the film's comfort level with the kind of material that holds its hero enslaved.

Naturally, any film that deals effectively with the subject of pornography is going to have an inescapable "ick" factor, and from his opening frames, Gordon-Levitt does a nice job showing how, from the moment we set children down in front of our TV sets, we're conditioning them to view women as sex objects. At one point we see a sex-soaked fast-food hamburger ad, shown almost in its entirety, that I was certain was a parody made for this movie until I found it on YouTube.

So, don't take your mom to see Don Jon. But if you know someone who's got a little romance going on with his computer, by all means buy him a ticket. He won't see anything here that he hasn't seen already … and that includes the lonely look of a guy living his life at the whim of the cursed cursor.