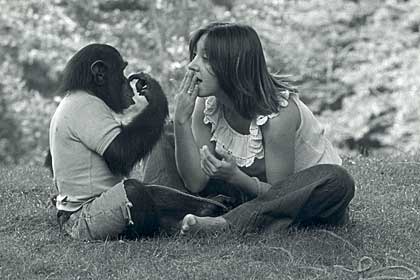 During the 1970s and '80s, scientists across the country launched experiments to determine whether non-human primates could learn human communication. Arguably the most famous involved Koko the gorilla, born at the San Francisco Zoo and successfully taught to communicate with his keepers in a number of ways. And then there was Nim Chimpsky, his name a spoof on Noam Chomsky, the famous linguist who believed that language was a skill exclusive to humans. The story of the project that aimed to prove Nim could learn American Sign Language is now the subject of a compelling, entertaining and heartbreaking documentary that shines as much light on human behavior as it does on that of animals.

Nim, a chimpanzee, was born in captivity in late 1973 in Norman, Okla. A Columbia University behavioral psychologist, Herbert Terrace, hatched a plan to have the animal raised by a human family to determine just how human-like he could become.

One of Terrace's former grad students, the idealistically minded Stephanie LaFarge, took Nim, then two weeks old, from his mother's arms and brought him to her brownstone on New York's Upper West Side. There she adopted extreme measures to raise the baby ape as her own — even breastfeeding him. LaFarge had recently remarried, and she'd failed to ask her husband and their blended family of seven whether they were willing to join the experiment.

Several of the kids were thrilled with their chimp sib, playing with Nim and dressing him in charming outfits. But LaFarge's husband was challenged by the animal; Nim instinctively reacted with hostility to this male authority figure. While Nim learned to sign fairly quickly, the wild animal in him proved difficult, to say the least, to discipline. Chaos soon reigned, and Terrace ultimately deemed LaFarge an unfit mother and placed Nim elsewhere.

Some semblance of this series of events would repeat several times during Nim's early life, as the chimp, his destiny ruled by the seemingly unfeeling Terrace, was passed along to one caregiver after another. Sound familiar?

Project Nim is directed by James Marsh, whose Man on a Wire, a tour de force about tightrope walker Philippe Petit, won the Best Documentary Oscar in 2008. In his latest film, Marsh probingly but unsentimentally interviews the key players involved in Nim's journey. Marsh also uses multiple stills and video footage of Nim as the chimp moves through this grand experiment, illustrating for his viewers how the humans who volunteered to work with Nim ultimately failed him because they couldn't put aside their own personal or professional interests to consider his well-being.

At various points in the film, you will be brought to tears over what becomes of Nim — though he ultimately finds something of a home, the type of place he belonged in all along. That sadness you feel will not just be for him, but for the flawed nature of humanity that compels us to interfere where we should not.