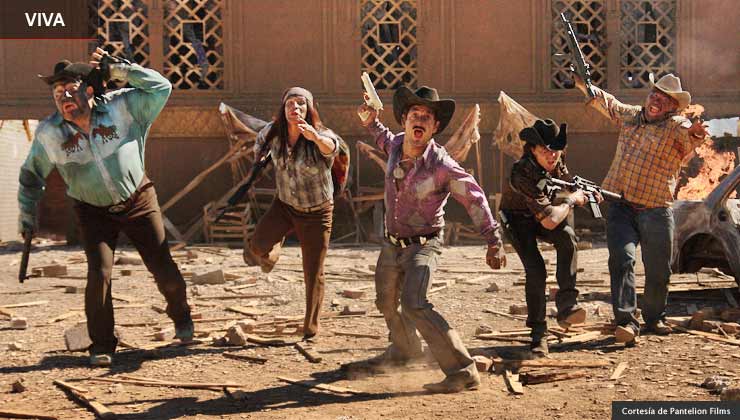 Reportedly one of the most expensive Mexican movies ever made, the film, which opens in the United States on September 2, stars Miguel Rodarte as Sinaloa drug kingpin Julián Pérez, who’s charged by his mother to find his brother, an American soldier who’s disappeared in Iraq. Julián’s mom and sibling have been living in the States for years.

Julián rounds up a “combat team” to help him out: an aging Vietnam vet, a contract killer, a drug courier and an Indian tomato grower who happens to be one of the kingpin’s oldest friends. The clueless group, none of whom knows exactly where Iraq is, heads off to the combat zone. But first they land in Istanbul, where they meet their interpreter and local weapons contact, a lanky, blond-haired European named Sasha, whose name no one can pronounce, so they take to calling him “Chacha.”

Next, they mount camels and head to Iraq and the killing fields of Karbala, where the Mexicans have a number of run-ins with insurgents and Americans. Then comes the climactic rescue and fire fight.

Saving Private Pérez is told in a deadpan comic style that relies more on the story’s basic absurdity than shtick or comic set pieces. Just the sight of these Mexicans wandering around Iraq in cowboy hats, shirts and pointy-toed boots—looking like a norteño band whose tour bus driver got very, very lost—is enough to elicit chuckles.

There also are a number of amusing cultural riffs, like the time one of the team wonders if hot peppers might work better than electric shock as a torture device.

But at 105 minutes, the film is about 10 minutes longer than it needs to be. And director Beto Gómez is definitely no stylist; Saving Private Pérez could have used a bit more pizzazz in the visual and editing departments. The pacing can be sluggish and the action scenes in the film would have gained from more camera movement and faster-paced editing.

Yet a concept this inspired has a definite upside. The film touches on everything from martial arts movies to narcocorridos, from The Godfather to classic horse operas like Once Upon a Time in the West. (One shot is an almost direct lift from the Sergio Leone classic).

“Mexicans?” asks an American military officer incredulously when he discovers who’s in the mysterious team running riot through his war zone. And it’s that sense of utter ridiculousness that makes Saving Private Pérez click.

You may also like: Review of A Better Life, the struggles of an undocumented single father.